Alzheimer's, getting old, and new drugs

Alzheimer's is a cruel disease. Some friends of mine swear to it as their parents have that disease. The parents who gave them life, them who sacrificed a lot to give them good education, comfortable living, brought them to many memorable places and people, slowly forget those things. What's worse, they slowly forget about themselves, and their children. 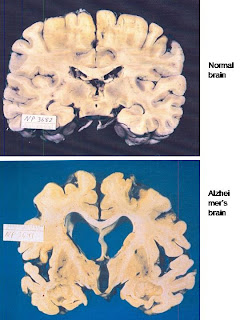 Alzheimer's disease is the progressive deterioration of mental functions. Starting from limited and declining attention span to behavior change to forgetfulness.

There is one good advocacy group, the Alzheimer's Association based in the US. They produce good information materials and data about the disease. Among such data include: 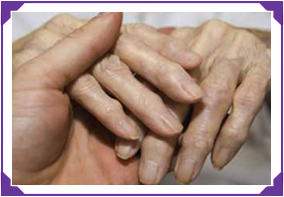 * "Alzheimer’s is a tragic epidemic that has no survivors. Not a single one," said Harry Johns, president and CEO of the Alzheimer’s Association. "It is as much a thief as a killer.

The Association recently produced a new report, Generation Alzheimer's: The Defining Disease of the Baby Boomers . Some data from the report says: 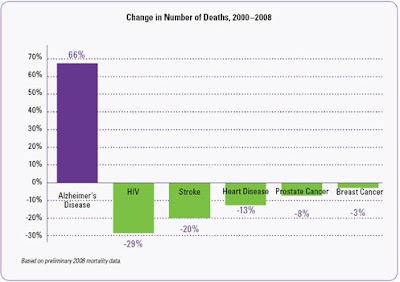 This data is too graphic: while the percentage change in deaths from cancer, heart diseases, stroke and HIV is declining or in the negative territory, the change in death for people with Alzheimer's is increasing. Period covered was 2000 to 2008.

As I consistently argued in this blog and in my other writings, as diseases evolve, as lifestyle evolve, treatment should evolve, continuously, no let-up. Such treatment range from new medications to new knowledge of assistance by those who take care of Az patients. I also repeatedly argue that the role of private enterprises, the competition among them, is what will provide the continuing and long-term solution to various health problems that mankind will see. It's not more government regulations, more government provision of healthcare, more government taxation to finance those often choking regulators and bureaucrats, and expensive healthcare subsidies and entitlements. 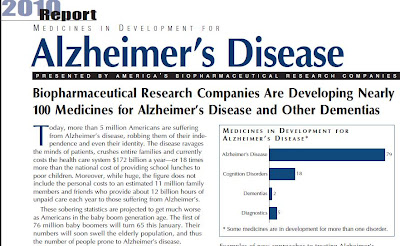 I checked with innovation.org to see the extent of medicine innovations that are in development. This is a welcome news -- some 98 new drugs in various phases of R&D are in the pipeline. Data is from 2010 Report: Medicines in Development for Alzheimer's Diseases.

As I noted in my earlier paper, Going back to our roots, my father is now 83 years old, my mother is 77. I am glad that so far, they do not show symptoms of the Az disease. But a number of senior Filipinos that we sometimes fondly call as "ulyanin" (forgetful, irritable) may be showing symptoms of Az, whether mild or moderate. Severe cases would easily lead to death as the mind and body would ultimately shut down.

One important public health policy debate today or someday will be, by how much government healthcare expenditures should be devoted to Az disease treatment. Unlike mostly lifestyle-related diseases like lung cancer, heart diseases and diabetes, Az disease is due to nature, our biological clock ticking fast.

The cost of treatment of this and other diseases should be kept as low as possible. It can be done through more treatment and medicine innovation, and the fierce competition among innovator companies, and later on, among generic companies.
-----

Related articles on innovation here will be:

On intellectual property abolition, part 3,
IPR and medicines, part 8
Posted by Bienvenido Oplas Jr at 1:30 AM

Such a sad disease. The Alzheimer's Association has been doing a great job helping families.