Here is the distribution of THE, 1997 vs, 2005. PhilHealth was created in 1995 after the defunct and heavily corrupted government MediCare went bankrupt. 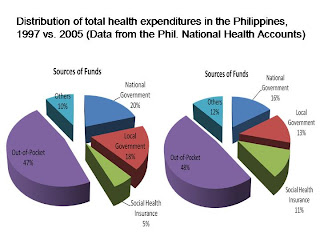 1. After 10 years of PhilHealth existence by 2005, its share in THE remains a small 11 percent, what does it imply?

2. High OOP spending even after combined government involvements by DOH, LGUs and PhilHealth, this means what -- market failure or government failure?
-----

Yesterday, there was a meeting by the Coalition for Health Advocacy and Transparency (CHAT) in Quezon City. CHAT is a coalition of health NGOs, research and advocacy NGOs, that believe in more transparency, more accountability in government healthcare policies including drug pricing policies. It is the civil society component of Medicines Transparency Alliance (MeTA) Philippines. 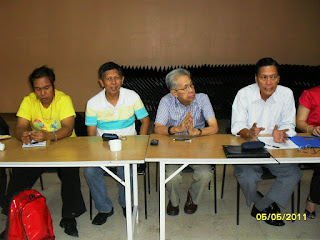 Gov. Obet talked about the Thailand model of universal health coverage and why it is working, with about 98 percent of the population covered by health insurance. He said that Thailand's Ministry of Health (MOH) and the Social Health Insurance Office give hospitals and health facilities in the provinces a fixed amount of money, xx Baht per year, to take care of the health needs of everyone in that province. The private and government hospitals and clinics give good quality out-patient services to patients, give them free medicines. The hospitals will earn more if patients are not confined and recover at home.

In the Philippines, the hospitals will earn more if patients are confined as they collect both from the patients and/or their private HMOs, and from the government-run PhilHealth. He believes that there are sufficient money and resources to provide universal healthcare for all without huge extra budget and higher mandatory premium for PhilHealth, if the design is appropriate, like the one in Thailand. 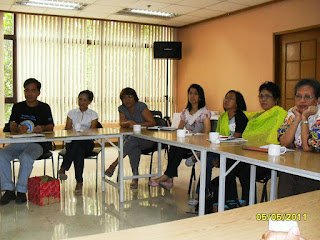 Vanni Villafuerte (left most in this picture), provided some philosophical discussions, like CHAT's "theory of change" and the principle of subsidiarity. He said that civil society organizations like CHAT are different from government (like the Department of Health, PhilHealth, local governments, etc.) and also different from industry (pharma companies, foreign and local; private hospitals, drugstores, HMOs, etc.).

But more than decentralization, subsidiarity principle says that functions that can be done better by individuals and their civil society organizations (like CHAT and its member-NGOs) should not be passed on to government, whether local or national. Thus, extending the principle of subsidiarity will result in smaller government and bigger role for civil society groups, individuals and households. 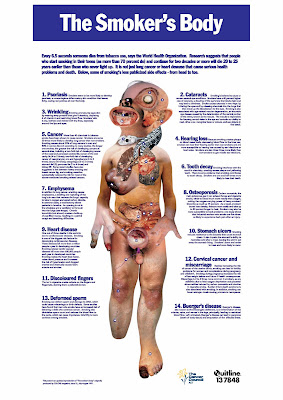 We do not need government, local or national government, for instance, to remind people that heavy smoking is bad for their health. Even if government will confiscate more money from the pockets of those who work hard and take good care of their body, so that government will have more money to treat those who have lung cancer, throat cancer, tuberculosis and other diseases directly related to heavy smoking, overall health outcome will remain bad or poor.

So the role of civil society groups, for me, goes beyond fiscalizing and watching government against corruption and wastes of taxpayers' money. It's more of reminding people, the ordinary citizens, that many "social services" like good healthcare can be more efficiently done by the individuals themselves, like telling people that over-smoking, over-drinking, over-eating, over-sitting, over-fighting, etc. are not good for their body.
----

I think I should take closer look to Philippine healthcare.