Drug price control 6: Exploring just one price for each drug

(Note: this is my article today in thelobbyist.biz, Merits and demerits of high drug prices, Part 1.

When drug prices are high, people complain and governments are pressured to intervene to stabilize, if not cut, drug prices. When drug prices are low or are given away for free, irrational drug use can happen as people tend to over-dose, or take medicines just for the psychological effect of getting well. Drugs are cheap or free anyway.

Drug pricing, like oil pricing, electricity and food pricing, will remain a contentious issue in many countries, developing ones especially like the Philippines. The drug price control policy imposed since August 2009 for selected drug molecules and products remain until today and there seem to be no signs of being withdrawn. 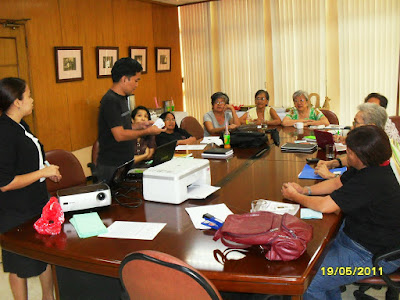 Last week, I attended a meeting of the Coalition for Health Advocacy and Transparency (CHAT), a coalition of health NGOs and some think tanks which have health research projects. It is also the civil society partner or component of the Medicines Transparency Alliance (MeTA)-Philippines. The think tank which I head, Minimal Government Thinkers, is a member-NGO of CHAT.

There were many topics that were discussed during the meeting, but I will focus here on three controversial proposals made by some fellow NGO leaders within CHAT.

1. There should be only one price for each drug – of the same molecule, same brand, same dosage, from the same manufacturer. Regardless of the drug outlet – government hospitals, private hospitals Mercury Drugstore, Botika ng Bayan or any other public and private drugstores. And regardless of outlet location – Metro Manila, other big cities, far away municipalities and barangays.

2. There should be no advertising allowed for medicines in order to help reduce drug prices. Instead, all pharma companies will be featured in a public forum attended by physicians, pharmacists, other health professionals and the public.

Here are my comments and reactions to the above three points.

On #1. Prices of drugs in hospitals are generally higher than the average price in most drugstores. Hospitals also generally do not allow patients’s guardians to buy drugs outside of the hospital pharmacy while the patient is still confined. One explanation is given by the President of the Private Hospital Association of the Philippines (PrHAP), Dr. Rustico Jimenez, is that some patients who happen to ingest substandard or fake drugs bought somewhere because the drugs there are sold there very cheaply, either do not get well or develop negative reactions or new diseases. And the hospital and the attending physicians are sued by some patients.

Former DOH Secretary and now President of Medical City Hospital, Dr. Alran Bengzon, explained in one of the meetings of the DOH Advisory Council on Price Regulation sometime in late 2009, explained it clearly. I was there in that meeting. He said, “We are in the business of healthcare, not selling medicines. The reason why hospital prices of drugs are higher is because there are administrative costs in the prescription, dispensation and monitoring of medicine to patients. After we give medicines to patients, we monitor if the expected improvement within a few hours will happen. If not, our physicians can discontinue such drugs and prescribe another medicine or other treatment. There are costs to these that we pass on as additional cost to medicines. Our goal is our patients to get well the soonest time possible.”

And each drug retail outlet has its own operating cost that is different from other outlets. For instance, some drugstores are air-conditioned while others are not. Some drugstores have competent full-time pharmacists who are paid higher while others have less-trained and part-time pharmacists who are paid lower. Other outlets are in more expensive locations where the rental cost per square meter is higher. Some cities charge higher and plentier local taxes and business permit fees than other cities and municipalities. Local taxes and annual business permit fees in the cities of Makati and Manila for instance, are a lot higher than local taxes and business permit fees in the cities of Davao, Dumaguete, Tagbilaran, Tacloban and other cities. The above factors can explain why some smaller drugstores can survive in cheaper cities even if their drug prices are lower, but cannot survive in more expensive cities.

This graph will help explain the point further. 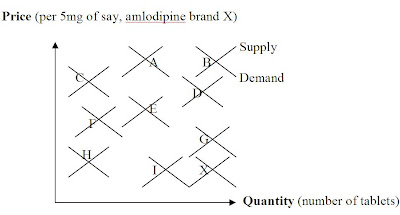 Each point (A, B, C,.. X) represents an “equilibrium price” for each outlet. Some can sell at a lower price and still make a profit. Some can sell at a higher price while paying higher operating costs and still make a profit. We can say that points A to D are prices by four different hospitals. Points F to G are prices by the top three drugstore chains, while points H to X are prices by the Botika ng Barangay, Botika ng Bayan, or smaller, independent private drugstores.

The differences in various costing, differences in shop branding, also explain why a softdrink from the same manufacturer, say Coke in can, has different prices – in a sari-sari (variety) store, in a carinderia, in a convenience store, in a medium-priced restaurant, in an expensive restaurant, in a 3-star hotel, in a 5-star hotel, and so on. The restaurant or shop owners attach various costs to the marketing and selling of their food and drinks products and services.

It is wrong, therefore, to expect or demand, that “there should be only one price for each drug product nationwide”.