To reduce the information imbalance between healthcare providers and the public/patients, one solution is to encourage branding by various service providers. That way, patients can expect the kind of service, the cost and pricing if they will go to company or hospital C rather than company or hospital A, B, D and so on. See my earlier note,  Healthcare Competition 4: Solving Info Assymetry, September 08, 2010.

I read today a good paper in the New Asia Republic (NAR), Is there moral hazard in Healthcare subsidy? by Kelvin Teo. Kelvin discussed the paper by Malcolm Gladwell, “The Moral-Hazard Myth” and he argued against the moral hazard approach to health insurance. Kelvin concluded his long paper with this note,

As for the final verdict over the existence of moral hazard in wholly subsidised preventive healthcare... we cannot rule out the fact that the total subsidy will attract health conscious citizens to consume preventive health services at higher frequencies. For moral hazard in heavily or totally subsidised curative treatment, arguments for and against it is a matter of patient perspective; those who take their health for granted due to subsidies versus those who care about quality of life not to let their health degenerate to the level of organ failure. Thus, it will be premature to consider moral hazard in healthcare subsidy a myth.

There is a long exchange between Kelvin and some readers. One angrydoc for instance, argued that

...based on my personal experience and from talking to my colleagues that patients who do not pay out of their own pockets do consume more healthcare. With subsidised curative healthcare, it doesn’t matter if patients do or do not consciously neglect their health – the burden of curative treatment still falls on the government/tax payers.

To me, the bottomline question is not whether we can or should hold people responsible for their behaviour which affect their health (because in reality we don’t), but why a person’s healthcare cost should be anyone’s but his own responsibility.

I tend to lean on “healthcare is mainly personal (and parental) responsibility, not government responsibility.” Thus, I get the point of angrydoc. The level of moral hazards in healthcare is dependent on how much individuals will pay (in the case of co-payment by government and individuals) in relation to publicly-funded insurance. My friend in Japan told me a few years ago, that in Japan, a hospitalized patient pays only 5 percent (personal, or company or private health insurance) and government pays the 95 percent. So some patients do abuse, staying in the hospital for 1 week or more when their condition would already allow them to go home after 2 or 3 days confinement. Even doctors and private hospitals would be happy with this arrangement as this would mean bigger revenues for them.

One important consideration in bringing back to the individuals the personal responsibility aspect of healthcare, is that in both rich and poorer countries today, “lifestyle-related" or non-communicable diseases (NCD) are now the main killers, not those old sickness like malaria, flu, polio, dengue, etc. So if people get sick later because they tend to over-smoke, over-drink, over-eat, over-sit, etc., why would the rest of taxpayers pay for their treatment later on?

On accidents and predisposed diseases (say prostate and breast cancer), I think all people understand that somehow, sometime, they will get sick or get injured someday. Thus, the need to get a personal or corporate health insurance. Or even a village and small community health insurance.

So my answer to the article's title, “Is there a moral hazard in healthcare (government) subsidy?” is Yes. To reduce if not totally remove that moral hazard problem, remind people that healthcare is first and foremost a personal and parental responsibility, not government responsibility. Then healthy lifestyle, preventive and wellness programs, private health insurance will naturally come out as solutions, not more taxes and more government involvement -- like drug price control policy, busting the patents and IPR of newly-discovered medicines, health insurance monopoly, etc.

When healthcare has been decentralized down to the level of companies, small communities and individuals, a dynamic competition among various healthcare providers, drug manufacturers and retailers, should emerge.
-----

Here's a related short article that I wrote last February 21, 2011:

Health, like food, education, housing, information, etc. has costs. They cannot just be provided "for free" out of thin air, somebody has to pay for it.

A nice theoretical framework of when a productive person will start receiving health subsidy (from his parents, other family members/friends, government, etc.) and when he should contribute to such subsidy. 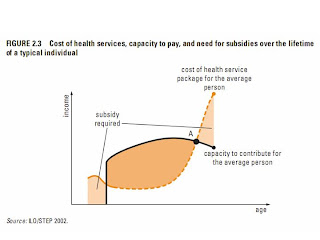 (Click the picture to see a larger image) At a young and non-productive age (say, still a student), the person receives subsidy. When he begins working, he is a net contributor to the subsidy pool even if he also receives some healthcare from the system.

When he grows older and becomes less productive, or still productive but chooses to just enjoy his remaining years, he becomes a net recipient of healthcare subsidy again.

Nice and simple model. The "subsidy" here should be taken in its generic or general use, meaning not exclusively referring to "government subsidy" but also to "parental subsidy", "siblings/friends' subsidy", "private health insurance", and so on.

I lifted this from one presentation by Dr. Alvin Caballes, a Filipino physician-economist. He's a friend who also came from UPSE PDE.
---------