After posting Fat-Free Econ 13: P2 Trillion of Election Spending and Taxes in our CHAT googlegroups, there were a few discussions among us.

James Auste of the Cancer Warriors Foundation (CWF) suggested that it is okey to engage in spending splurge, so long as "we are investing in life" by prioritizing public health.

If we go back to Table 2 of the article above, this is the priority spending for 2012 (this year), out of the P1.82 trillion total budget:

I do not know how much of the P43.3 billion DOH budget is alloted to procurement of medicines. But I notice that many LGUs are spending high for local public health.  The Manila City government alone maintains  6 city-owned hospitals, some are more modern than the UP-PGH, like the Santa Ana Hospital, 10 storeys high, fully air-conditioned. 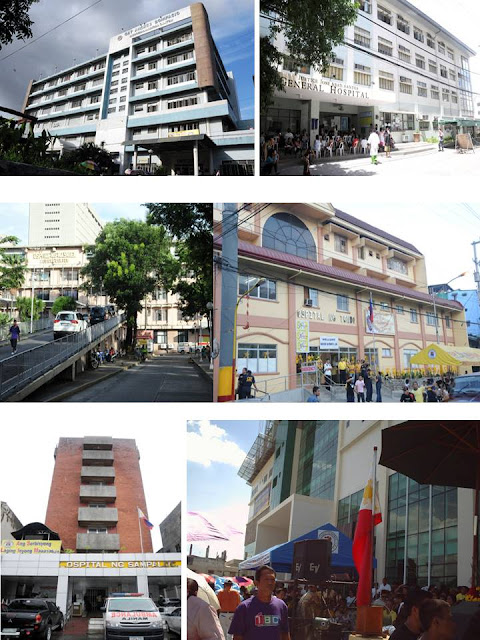 Other rich municipalities and cities and almost all provinces, have their respective municipal/city hospitals, provincial hospitals.

While health NGOs and other groups can lobby the government to "prioritize/give more money to health", the education NGOs and groups, housing NGOs and groups, etc. can also lobby the government to "prioritize, give more money to education/housing...". So these contribute to government spending that is rising fast. And government taxes, fees and other revenues are not sufficient, so government keeps borrowing, and that is how the interest payment has been the biggest expenditure item in the annual budget.
There is a DBM Circular No. 536, dated January 31, 2012, mandating certain departments and agencies to engage civil society organizations (CSOs) in the DOH and other agencies' budgeting process.  I have attended such DOH budget planning consultation with CSOs actually. I wrote in CSOs and State 12: From NGOs to GFOs, February 26, 2012,

I observed later how some CSO leaders would use the occasion to lobby for more DOH support if not funding for their specific advocacies. And this is part of the process by which NGOs become GFOs. I think the appropriate term for that will be "CSO Insertion" to differentiate it with "Congressional Insertion" and pork barrel in the national budget that many NGO leaders and the public so dislike.

After that DOH consultation with CSOs last February, there was no follow up meeting or consultation. Rightly so. The budgeting process each year goes something like this.
1. January to March, all departments and agencies prepare their budget for next year, conduct various consultations and meetings with their field, provincial, regional offices, local governments, CSOs, etc.
2. By April, they submit their budget to the DBM. Such budget proposals are usually huge, up to 2x or even 3x their current budget, to anticipate trimming down by the DBM and later, by Congress. The DBM, along with the DOF, NEDA and BSP, make a consolidated budget for the entire bureaucracy taking account of total revenues and projected borrowings that can finance all those agency budgetary proposals.
3. By end-July or early August, DBM and the Office of the President submit the consolidated budget to Congress, during or after the President's State of the Nation Address (SONA). And another round of public hearing and consultations done by the House of Representatives, later by the Senate, about those different agency budget.
Thus, health (and other sectoral) NGOs and other groups can follow up their specific requests with the DOH at the DBM at this time. They can write or approach the DBM to retain this and that project funding. By August, such NGOs and other sectoral groups can go to Congress to (a) retain those project funding or (b) return them in case the DBM has removed those.
I recognize that there is government role in addressing infectious or communicable diseases, tropical and pediatric diseases. I am no health anarchist. Although I am not a supporter of bigger government support for non-communicable diseases (NCDs) that are primarily lifestyle-related. There are many other forms of health financing -- private insurance/HMOs, corporate foundations, community, charity, etc. -- that can augment household spending to address NCDs and lifestyle-related illnesses.
---------