Last week, June 06, the first meeting for this year of the DOH Advisory Council on Healthcare was held. It was chaired by Assistant Secretary (ASec) Madeleine "Madz" de Rosas-Valera. It was among the liveliest meetings of the Council that I have attended since the Council was formed in 2009.


There were four topics and issues that were discussed and resolved that day:
1. Senior Citizens' discount (SCD), RA 9994, distribution of private sector burden since the government through the BIR assumed zero burden on this.
2. Electronic Drug Price Monitoring System (EDPMS), among the provisions of RA 9502 or the Cheaper Medicines Law of 2008 started in February 2006 under AO 2006-0009.
3. Status of implementation of the FDA Act of 2009 or RA 9711.
4. Proposed amendments to RA 9502 creating the Drug Price Regulations Board (DPRB). 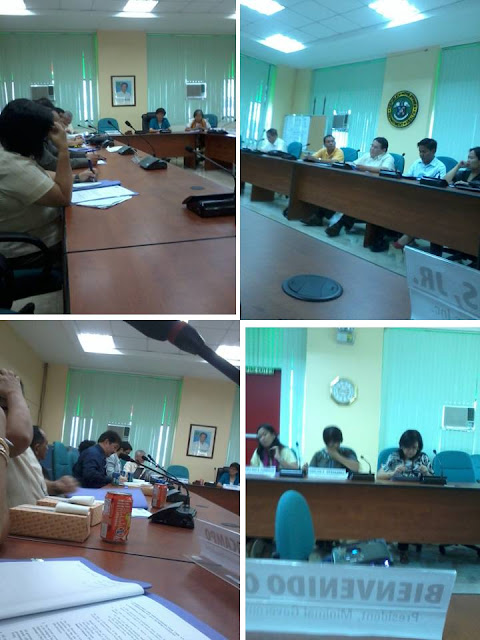 Dr. Madz is a vocal, frank and good-humored person. I really liked the way she chaired the meeting. And the DOH, despite its limitations, still offers a more open venue for real discussions and dialogues among various stakeholders on health issues, compared to Congress, both the lower and upper houses. I have argued in my earlier papers here, that there is a tendency of bullying by some legislators during Congressional Committee hearing.

On the expanded senior citizens discount (20 percent off on medicine prices, medical devices, hospitalization and other fees), the problems simply refuse to go away. Or more appropriately, the problems created were larger and plentier than the solutions they are supposed to provide in bringing down the prices of medicines and other healthcare goods and services.

Why? Of the 20 percent mandatory discounts given to senior citizens, 30 percent is supposed to be shouldered by the government through the BIR, in the form of tax credits by retailers, wholesalers and drug manufacturers, the 70 percent to be distributed among these private players. But this is not happening as the BIR refuses to recognize the discount as tax credit. So the retailers and manufacturers, plus wholesalers, are pointing at each other sometimes of who should shoulder the bulk of the burden.

So the government regulates and taxes the private players, then forces them also to provide mandatory discounts at zero financial burden to the government, and the public think that it is the government that gives the discount. This is deception.

What many private small drugstores and pharmacies do, is they do not carry or sell certain medicines and medical devices that are frequently demanded by the senior citizens, in order to avoid or at least limit the losses. Supposedly cheap but not available medicines, this is happening in certain areas of the country.

On the EDPMS, NCPAM mentioned that the recent DOH Administrative Order mandating the monthly updating of drug prices data by drugstores and pharmacies  to the DOH, imposing penalties for violation, has been released  Ms. Leonila "Leonie" Ocampo, President of the Philippine Pharmacists Association (PPhA), and Ted Colorado from the Drug Store Association of the Philippines (DSAP) explained why EDPMS is not working as designed and only created more problems and jacked up the operating costs of retailers. Leonie cited that they go around the country every week to conduct various seminars to Filipino pharmacists and the problem of EDPMS, the difficulty in complying with it, ranging from technical problems in uploading the data, to system inconsistencies with the DOH server, would always crop up.

Ted mentioned that he experienced facing the computer the whole evening up to early morning the next day and he was able to upload the prices of only five drugs out of several products they sell. I think the sheer volume of data from more than 22,000 drugstores nationwide being uploaded to the DOH would be enough reason to clog the DOH server and cause slow connections.

Madz said this is another example of "baking a cake that we cannot swallow", of having regulations that are difficult to implement. Yeah, that's why I said above that Madz is a frank and good humored person. Even if those being regulated want to comply with those regulations, they simply encounter various technical problems, not to mention diverting manpower away from the pharmacy and advicing patients, to the computer trying to upload data that would hardly go through the system.

There was one good resolution from members of the council who were there -- that they will ask the DOH  Secretary to have a moratorium on the implementation of complying with EDPMS pending further studies how to make the process easier to comply with, until end-2012 temporarily.

On FDA law implementation, the submission of a business plan to the DBM was briefly discussed.

On DPRB bill by Cong. Ferjenel Biron, Sen. Manny Villar and others, Dr. Madz said she is preparing an official position paper by the DOH on the subject. Generally, they are not in favor of creating the DPRB, they recognize that price control and regulation should be a "last resort" measure to further bring down medicine prices.

I briefly spoke on DPRB, I said that only one legislator is so gung-ho in creating this new bureaucracy, Cong. Biron and I think that he foresees himself to head this agency once it becomes a law. Given the conflict of interest of Cong. Biron -- he and his family own PharmaWealth, a drug importer and supplier, and Botikang Pinoy, a drugstore, it does not look good that the regulator is also a player, enjoying certain privileges that other drug manufacturers and pharmacies do not enjoy. I believe there is bad if not evil intentions in pushing hard that provision of institutionalizing price control as a policy and creating a permanent bureaucracy that will implement a bad policy.

Among the other agreements that afternoon, aside from (a) having a moratorium on EDPMS are:

b) change the name of the Advisory Council (AC) from AC on Healthcare to AC for RA 9502 implementation.
c) rationalize -- trim down, expand some -- the members of the AC
d) creation of a technical working group to further study the processes and implementation of EDPMS
e) the AC will meet quarterly or four times a year. 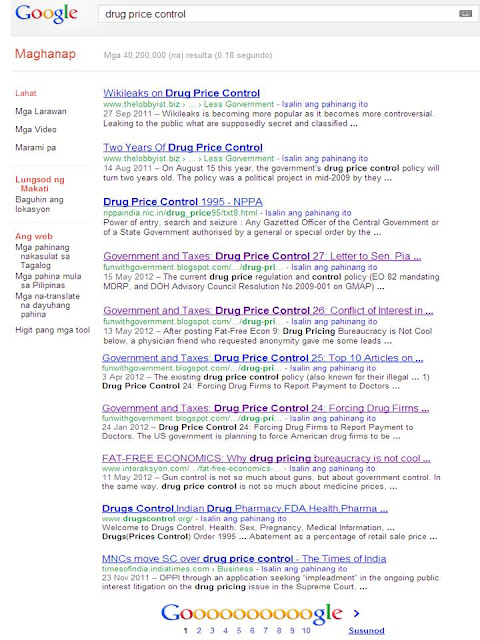 Seven of the top 10 articles on page 1 of google search are my papers: two from www.thelobbyist.biz, four from this blog, and one from www.interaksyon.com. :-)
----------