Today, June 12, is Philippine Independence Day, a national holiday to celebrate the Philippines' independence from Spain on June 12, 1898. Of course we never really got independence from the Spaniards as the Americans immediately took over as the new colonizers in 1898.
Below, the three key personalities of the Philippine Independence movement against Spanish colonization. Top row, Andres Bonifacio, the father of the revolutionary movement, Supremo (supreme leader) of the Kataas-taasang Kagalang-galang Katipunan ng mga Anak ng Bayan (KKK) or simply the Katipunan.
Second row, Jose Rizal, the national hero. An intellectual, physician, wrote two books sarcastic to the Spanish colonizers, "El Filibusterismo" and "Noli me Tanghere", executed by the Spaniards.
Third row, Emilio Aguinaldo, considered the first Philippine President in 1898 in a declaration made in Kawit, Cavite. He and his Magdalo faction of the Katipunan ordered the execution of Andres Bonifacio in May 1897. 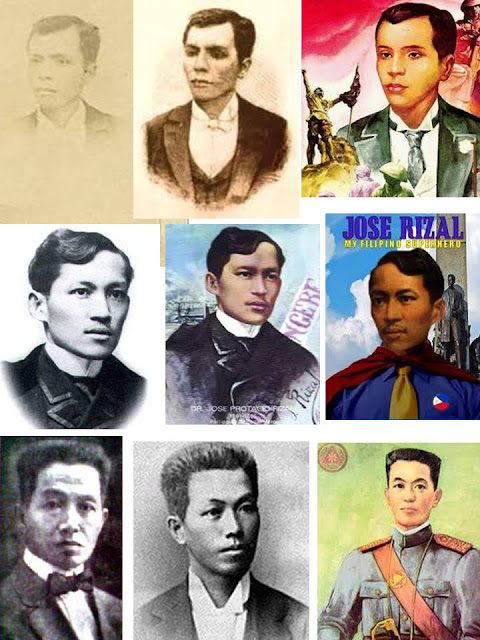 Last June 01, 2012, Prof. Michael Charlestone "Xiao" Chua of De La Salle University (DLSU) History Department (but he graduated from UP, also pursuing his PhD there) gave a talk to the club, "Undress Bonifacio: Paghubad sa Mito ng Bobong Supremo" (Undress Bonifacio: Exposing myths of a stupid supreme leader), held at Metro Club, Rockwell, Makati.
I thought that Michael would look down on Andres Bonifacio, he did the opposite. He said that unlike common conceptions (or misconceptions) and beliefs about the man, Andres Bonifacio was:
1. Not the typical bolo-wielding leader in many monuments around the country. Rather, the person there was a typical Katipunan rebel who revolted against Spain.
2. No ordinary worker-leader, he was a middle class worker in an British company and could speak, read and write English;
3. Was an intellectual, he read many books about the French Revolution, Napoleon, American Revolution, Rizal's two books, other literatures.
4. The first Philippine President when he reorganized the Katipunan from a secret rebel group to an open revolutionary government with himself as the Supremo, set the date of simultaneous armed uprising against Spanish forces. This was around August 28, 1896.
I learned many things from Prof. Chua's talk. It so happened that our club's name is RC Taguig Fort Bonifacio, a former AFP camp called Fort (Andres) Bonifacio. From his talk, I was convinced that Bonifacio was indeed the first President of the Philippines and not Emilio Aguinaldo.
Group photo after his talk. Standing, from left to right: me, PP Niel Antonio, President Norlan de Leon, Prof. Chua, PN Eric Lucero, Basil Semilla and Prof. Chua's colleague at DLSU.
Sitting, from left: Secretary Meann de Leon, PE Rose Antonio, Prof. Chua's staff. 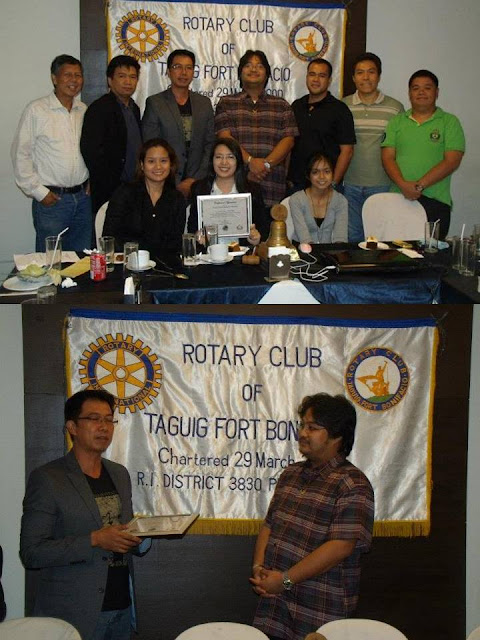 Prof. Chua also showed various writings by Andres Bonifacio that were relegated by mainstream education about the Philippine Revolution. For instance, for Bonifacio, to love the country, the community, oneself, is not so much to launch a revolution, but in doing one's work with honor and dignity. Honesty, dignity, integrity, these were some of the central teachings of Bonifacio and other Katipunan leaders then. These could be traced to their being FreeMasons. My Mason friend, Ozone Azanza, says that it is very basic and simple to become a Mason -- be a responsible father and husband, able to provide the needs of the family, has humility and personal integrity. Amen to that.

I would add that somehow these are also among the important teachings in Rotary although following the "Four Way Test" remains the prominent teachings and motto of Rotarians.

Advancing the philosophy of freedom and liberty, individual freedom and national independence, more personal responsibility and integrity, are among the important teachings of the anti-colonialism independence movement then which remain to have high relevance today. Personal  independence from colonizers, politicians and the high priests of coercion and deception. They remain an important challenge for liberty minded writers and propagandists.
Posted by Bienvenido Oplas Jr at 4:14 AM

This blog site is very good!