The Philippine Health Insurance Corporation, PHIC or simply PhilHealth, is a government-owned and controlled corporation (GOCC) created mainly to provide "universal healthcare" for the Filipinos. But the healthcare that it provides and subsidizes since its creation in 1995 is only for "inpatient" or hospital confinement for at least 24 hours. Thus, if a Philhealth member-patient goes to a hospital emergency room (ER) to have a check up say of fever or minor wound, then goes home after, the patient will not get any Philhealth subsidy or ER bill deduction.

Philhealth intends to provide outpatient benefits to all members by around 2016. In some areas I think, Philhealth subsidizes outpatient services but only for a very limited number of patients, sort of an experimental phase. 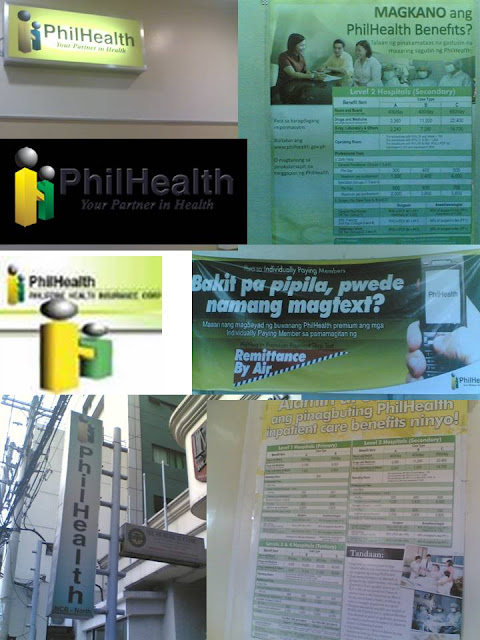 Does your Philhealth Contribution Help the Poor?
June 11, 2012.

There has been this politically correct idea which attempts to rationalize private sector contribution to the Philippine national health universal coverage as having a charity effect of helping the underprivileged or the needy.

Let us examine if this claim is valid.

First what is PhilHealth?


The Philippine Health Insurance Corporation (PhilHealth) was created in 1995 with the aim of placing a renewed emphasis on achieving universal coverage. It is categorized as a tax-exempt, government-owned and government-controlled corporation (GOCC) of the Philippines, and is attached to the Department of Health. It states its goal as insuring a sustainable national health insurance program for all.

But does Philhealth’s concept of insurance match with the real definition of insurance?....

Is Philhealth an insurance company?
No it isn’t. There is NO equal sharing of risk and thus is NOT qualified as an insurance company in the conventional terms.
Instead, Philhealth is a health coverage WELFARE program (verbally embellished by the term "insurance") funded mainly by taxpayers and complimented by an employment MANDATE (or as a form of tax on BOTH the employer and the employee).

So taxpayers get an additional whammy from a barrage of existing taxes: VAT, income, capital gains, estate tax, inflation tax among the many others. Of course, this is aside from Philhealth contributions which has been put in place in the name of universal health coverage.
The impression that taxes help the poor is deceptive. Taxes help the politicians and the bureaucracy which uses the poor as justification for coercive extraction of resources from the private sector. Taxes also serve as redistribution from productive use of resources towards consumption which diminishes investment and employment opportunities.
Aside, the welfare state promotes the culture of dependency and entitlement, as well as, reckless behavior which do not alleviate the position of the poor.
In reality, taxes help keep the “poor” poor
Does your contribution to Philheath fund the needy?
If we based this claim on coverage, then the rich, middle-class and most importantly the OFWs, whom has special treatment through “additional outpatient primary care benefits” have likewise been beneficiaries of everyone’s contribution.
So the claim that Philhealth benefits the poor is a BLATANT MISREPRESENTATION as the health welfare program’s coverage has been asymmetrically distributed, with a bias towards OFWs.
In fact, benefits are skewed AGAINST the poor based on access to Philhealth, let me repeat the last paragraph,

However, the enrollment process for each population category differs. For the formal sector, employees are enrolled upon the start of employment. It is mandatory that all employees enroll in health insurance. No exceptions are allowed for the size of the company. For the poor, the local government determines “poorness” and enrolls those who are determined poor. For the rest of the population there is open enrollment—one can walk into a local enrollment office anytime to enroll.

Because of the employment mandate, the formal sector has automatic enrollment-access while the “poor” will have to be screened by local politicians.
In short, access to Philhealth has been politicized and largely depends on the interests of local officials who may use Philhealth as means to secure votes or for other personal agenda.
The “poor” is, thus, not privileged under this TRANSFER or REDISTRIBUTION program.
Bottom line: Based on the above, the claim that private sector’s contributions to Philhealth have the “charitable” consequences to the poor is unfounded and baseless or propaganda from mouthpieces of the government.
Postscript: Accounts of corruption or malversation of funds or dipping on the coffers of the welfare institution aggravates the plight of the poor which underscores the waste and inefficiencies from such programs.
---------

With due respect to my friend Benson, I believe that PhilHealth IS an insurance company. If a member or contributor is hospitalized by at least 24 hours, that person and his/her family can expect some subsidies or hospital bill deduction from PhilHealth and thus, reduces the cost of healthcare for that household. If a member is not hospitalized, like me, been contributing to Medicare that later became PhilHealth since I started working in the 80s but never been hospitalized, then that person is simply a net contributor and has zero direct benefit from the pooled fund.

But I agree with Benson that the coercive nature of membership in PhilHealth is not good. Whether one supports the philosophy and healthcare coverage of PhilHealth or not, he is obliged, forced and coerced, to pay up a monthly contribution to this government corporation.

Philhealth does NOT fall into the definition of PRIVATE sector insurance where risks are EQUALLY shared.

Definiton of Welfare: (wikipedia)(UPPER Caps mine)

In a more general sense, Welfare also means the well-being of individuals or a group - in other words, their health, happiness, safety, prosperity, and fortunes.

SUBSIDY Subsidizing a good is one way of redistributing wealth to the poor. It is money that is paid usually by a government to keep the price of a product or service low or to help a business or organization to continue to function. In a budget constraint between ‘all other goods’ and a ‘subsidized good’, the maximum amount of ‘all other goods will remain the same but the budget constraint will shift outward for the ‘subsidized good’ because the cost of the ‘subsidized good’ is reduced for the consumer and so they have the ability to consume more of said good. Some people do not want to use subsidies because they want the poor to consume the subsidized good or service in a specific way or because subsidizing goods (such as health care) can lead to an over consumption of the good.

VOUCHER A voucher is like a subsidy that can only be consumed in a specific way like a school voucher or section 8 housing. For instance, families who receive school vouchers may only use them to send their children to schools to help pay tuition costs. Schools then exchange the voucher for cash. Similarly, in section 8 housing, families with this voucher can only use the voucher to pay a portion of their living costs in specified units or in a private sector. In a budget constraint between ‘all other goods’ and a ‘voucher good’ our budget constraint will shift out parallel to an amount equal to the amount of the voucher but the money we have to spend on ‘all other goods’ remains capped at the same amount we had to spend before the voucher. Voucher programs can make us worse off because of the cap on our ability to spend on ‘all other goods’ our indifference curves could limit us.

DIRECT CASH This is straight cash with no restrictions on how it can be consumed. Direct cash may cause greater budget constraint because the recipient can spend the cash subsidy on all ‘other goods’ or on a ‘subsidized good’. Direct cash increases the entire budget constraint and shifts the indifference curves outward allowing us to maximize individual utility.

You say: "If a member or contributor is hospitalized by at least 24 hours, that person and his/her family can expect some subsidies or hospital bill deduction from PhilHealth and thus, reduces the cost of healthcare for that household"

SUBSIDIES are part of WELFARE not insurance.