* This is my article today in the online magazine, http://www.thelobbyist.biz/perspectives/less-gorvernment/1314-biopharmaceutical-rad-innovation-and-government
---------- 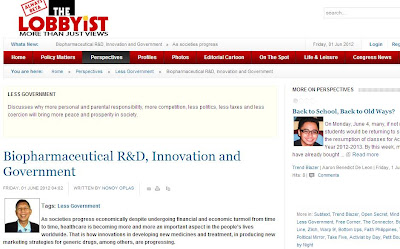 As societies progress economically despite undergoing financial and economic turmoil from time to time, healthcare is becoming more and more an important aspect in the people’s lives worldwide. That is how innovations in developing new medicines and treatment, in producing new marketing strategies for generic drugs, among others, are progressing.

Recently, certain sectors in the US, the center of pharmaceutical and biotechnological R&D and innovations, have been sounding an alarm bell that many countries around the world have been aggressively moving towards more innovations in this sector.

Battelle Technology Partnership Practice recently released its report, “The Biopharmaceutical Research and Development Enterprise: Growth Platform for Economies Around the World”, May 2012. It contains a lot of data covering 18 countries from N. America, S. America, Europe and Asia, showing the various programs that the governments in these countries have started to spur more innovations in various sectors in general, and the biopharmaceutical sector in particular.

I extracted some data for the four Asian countries covered in their report – China, Japan, Singapore and South Korea – mainly to see how the Philippine government can possibly take lessons from such initiatives. Then I included comparative data for the US. I chose the table on R&D spending.

The Battelle report narrated also these programs by the following governments to improve R&D and biopharmaceutical innovation.

1. Singapore. Been very aggressive in recruiting foreign researchers to come to its research institutes. Its National Research Foundation Fellowship Scheme offers newly recruited fellows grants of up to $2 million over five years (over and above salary support at the assistant professor level at one of Singapore’s universities). Singapore is also developing the 2‐million‐square‐foot Biopolis Research Park (established 2003), itself one component of the multidisciplinary One‐North research park complex. Biopolis was designed specifically to co‐locate A*STAR’s bioscience research institutes is side‐by‐side with the R&D operations of their industry partners. As of 2008, there were 30 companies with significant biomedical research interests at Biopolis, many of them well‐known multinationals.

2. South Korea. To serve as a hub for international clinical trials, the government has established a Korea National Enterprise for Clinical Trials (KoNECT), which has recently created five new regional centers to train clinical‐research personnel, bringing the total to 14 nationwide. In addition, the Research Hospital Program has selected two hospitals to become comprehensive sites for translational research institutes in partnership with industry.

3. Japan. Focused on fostering industrial collaboration with universities through the creation of “SuperZones”, which offer reductions in regulatory burdens as a way of promoting university/ industry collaborative research. The first competition specified a focus on R&D in state‐of‐the‐art medicine.

4. China. Increased its R&D investment by ten percent each year for the past ten years. At this level of investment, China’s R&D spending will reach $154 billion in 2011, the second‐highest total R&D investment of any country in the world. As a result, China’s share of global R&D investment will increase from 11 percent in 2009 to 13 percent in 2011. China currently is investing about 1.75 percent of GDP in R&D. China’s leaders have set a goal of 2.5 percent.

Among the main lessons from the various programs of the 18 countries surveyed are the following.

- Building R&D excellence and seeking to accelerate commercialization of research findings by increasing public funding of R&D; encouraging greater public/private collaborations, often with international partners; attracting the R&D operations of global companies through a range of tax and other financial incentives; adopting policies to encourage universities to commercialize research findings; investing in R&D infrastructure; and implementing a range of policies to encourage private firms to invest in R&D from flexible immigration laws to tax and other policies.

These are important lessons for the Philippines. Currently, our biopharmaceutical R&D capacity is limited to a few local pharma companies like Unilab, Pascual Lab, and those in a few local universities. But these innovations are limited to conducting bioequivalence and biosafety tests for certain drugs and other biotech products.

Given the limited fiscal resources of the Philippine government, it cannot be expected to lead in raising public spending for R&D. What the government can do instead, is to encourage private biotech and pharmaceutical companies, local and multinationals, to expand their R&D and innovation capacities. One important policy to do this is to reduce the bureaucracies, reduce the taxes and fees, for these private enterprises. Allow more competition from more players, instead of heavily regulating the few existing players, which discourage the entry of more and new players.

Soon, biotech and R&D policies and enterprises from Hong Kong, Indonesia, India, Malaysia, Thailand, Taiwan, Vietnam, will be highlighted in future Battelle and other major international reports, leaving the Philippines among the non-mentioned countries. For the simple reason that while the government does not have enough fiscal resources to conduct more R&D in the health and life sciences, it also has not loosened its interventionist hands and tax-hungry policies. It will be another shameful reality for us someday.
---------

Here are additional data and quotes from the same Battelle Report. 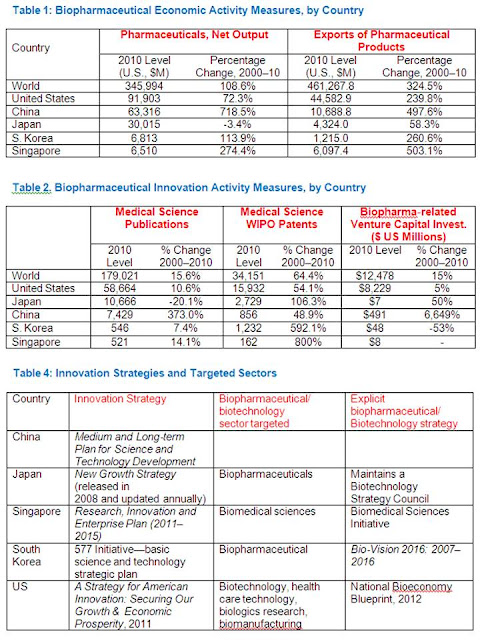 “Pharmaceuticals are knowledge products. Drugs are physically small but their effects are targeted and potent and they command high value. That is how Singapore must be. Ours is a small island with no natural resources. We must therefore invest in knowledge and R&D, recruit and groom talent, and focus our efforts to excel in niche areas. Then we can transcend the limitations of physical size and punch above our weight class among the global competition.”

“With such vast market opportunities, it is little wonder that many Asian countries are developing biomedical manufacturing and R&D activities. In Singapore’s case, our plans for the development of a biomedical cluster began ten years ago. Since then over S$5 billion have been invested. With excellent connectivity to key Asian markets, a stable and skilled workforce and our well‐developed and robust Intellectual Property (IP) regime, Singapore has attracted leading global companies from the pharmaceutical and biomedical sciences industries to establish operations here.”


Singapore provides a 400 percent deduction for R&D as well as for IP acquisition or protection, training and approved design or automation project.32 As illustrated in Table 8, a number of countries offer R&D tax incentives with the objective of inducing multinational companies to locate or to expand R&D operations in their country. 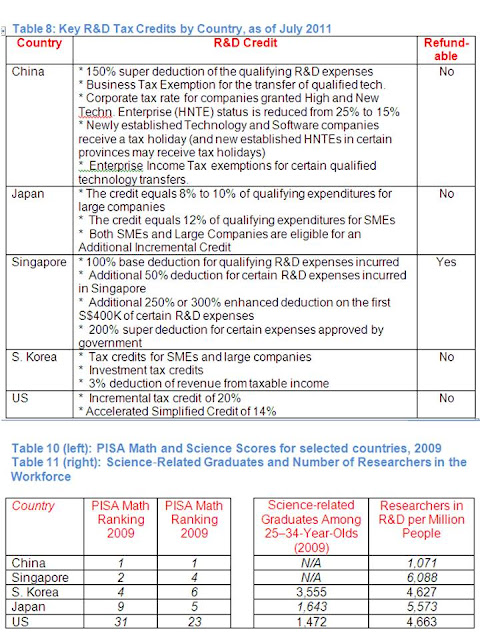