Just a continuing proof that BIG government is wrong, is also the continuing debt and financial turmoil in Europe. Of course, the same heavy debt burden is also experienced in North America, Japan and other developed economies, regardless of their forms of government -- parliamentary, presidential, federal, centralized, unitary, etc. 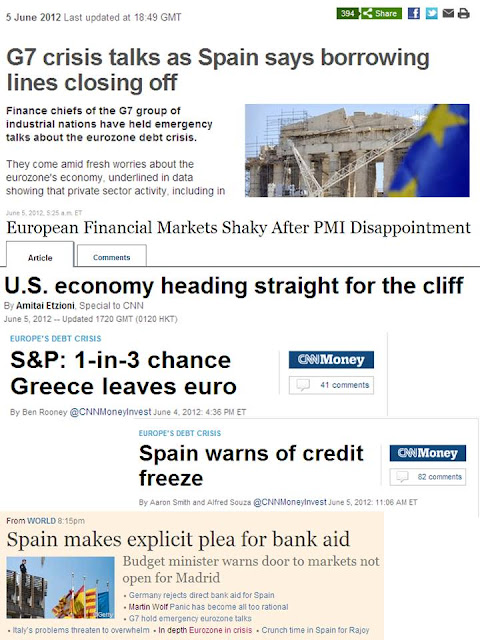 
...According to The Economist's credit-crunch index, credit is now tighter in the euro area than it was at the height of the financial crisis (see top-left chart). This is having a detrimental effect on the real economy, as demonstrated in the following three charts. When the index was last at a similar level during 2008-09, economic output tanked, unemployment shot up and stockmarkets plummeted. Unless policymakers find a lasting and credible solution soon, it seems likely that the same will happen again. 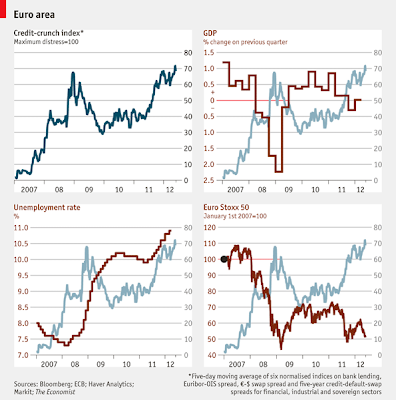 Another chart below from the same magazine, A rebalancing act, May 22nd 2012.


GREECE is in a bind. Because it is stuck with the euro, it cannot become more competitive by currency depreciation. Instead it must lower its real exchange rate, by cutting prices and wages. This is proving a painful process. One measure of progress, unit labour costs (the average cost of staffing per unit of output), is declining and will continue to do so, according to the OECD’s latest Economic Outlook. Cheaper labour should result in cheaper goods, making Greek exports more attractive to foreign buyers and helping to improve the trade deficit. But with less money in workers’ pockets domestic demand—the sum of consumption, investment and stock-building expenditure—is likely to fall further. The OECD recommends that trade-surplus economies, such as Germany and the Netherlands, push up costs. This would make Greece more competitve, without dragging on Greek workers' incomes. 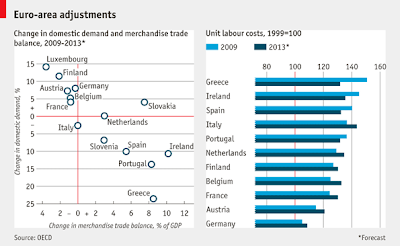 And one more chart, also from The Economist, The German motor, May 15th 2012.


(Germany's) economy surpassed expectations by managing to grow by 0.5% during the first three months of the year. As a whole, the euro area registered stagnant growth, and without Germany its economy would have declined by 0.2%. Germany accounts for about 28% of euro-area output, yet its contribution to euro-area growth has increased markedly since 2004. It was responsible for 65% of the region's growth in output on average since 2007. Meanwhile the euro zone's peripheral countries—Portugal, Ireland, Italy, Greece and Spain—have seen their contribution decline from a pre-crisis average of 45% to a drag of 10% since 2007. 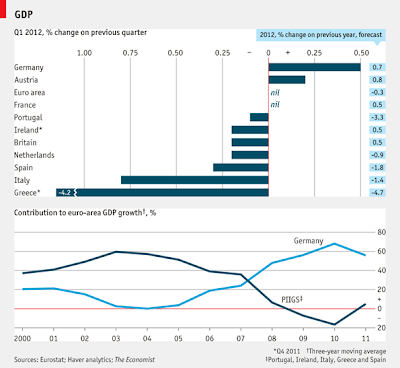 Look at that, a 0.7 percent GDP growth is already "high" in EU situation these days. The economic contraction, negative change in GDP size, has spilled over beyond the PIIGS, now covering Britain and the Netherlands.

Being an advocate of lean and limited government -- for limited coercion, regulations, restrictions and taxation -- it does not make me happy either to see these figures of bad economic performance by those economies under BIG governments.  But since those governments and the respective political parties and political groups and NGOs that support them, cannot be convinced easily of the mistake of further expanding government size and costly welfarism, we have to allow the natural course of events to teach them, the public, some hard lessons.

Some libertarian anarchist friends would question, "Why have limited coercion, why not zero coercion by abolishing government entirely?" Well, sports and gun clubs, rotary and other civic clubs, village and professional associations, etc. are mini-governments actually. They have their own bureaucracies, their own set of rules and regulations with respective rewards and punishments, collect mandatory annual dues and other fees that appear like taxes. In the event of conflict among their leaders, or an inter-club (say gun club) disputes, there is a need for a bigger force with its own coercive power, to settle disputes with finality. And we are referring to the promulgation of the rule of law, enforcement of contracts, between and among people, private enterprises, various civil society organizations, as the main "raison d etre" of government.

Suffice it to say that somehow we need government, but it should be a lean one focused on implementing very few functions. Big and expansive, highly intrusive government is wrong. 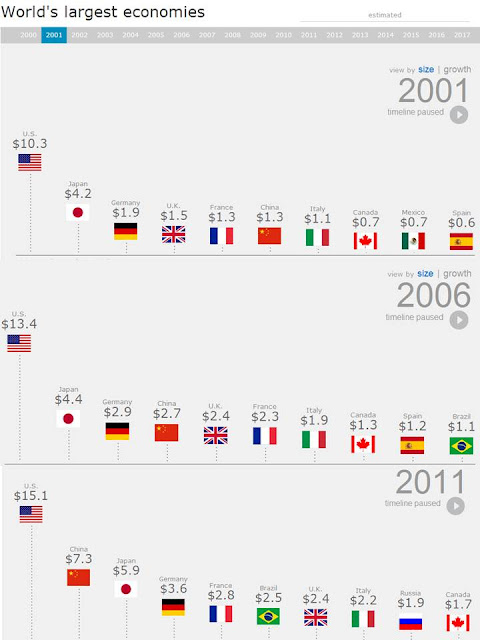 * Trivia: If the basis for G8 membership is being the "world's largest economies", then Russia and Canada should be out of G8 and China and Brazil should be in. One way to correct this is to expand the association to G10 and Russia and Canada can remain. But it's all about politics by the G8 member-governments.
---------