Trade between and among people and enterprises happen because it benefits them, both sellers and buyers, producers and consumers, wholesalers and retailers. Free trade encourages people to become efficient, to produce more as they know that their output will find their way to other people who want and demand their products, wherever they are in the planet.
I will dwell on some economic theory on how excess supply by producers, and excess demand by consumers -- you and me and our families and friends -- adjust with each other, even with zero government intervention.
Some people say "Economics is common sense" and "Economics is the study how to ruin the economy." The first quote is more frequent and the quick answer is "Common sense is not too common." The second quote is more satirical and my quick answer is "the State and most politicians ruin the economy."
I say that "common sense is not too common" because what most people would consider as "common sense" is actually using coercion or more government intervention. The price of gasoline rises, so government should regulate oil prices or nationalize all foreign oil companies in the country. The price of medicines are expensive, so impose drug price control or put up a government pharmaceutical company. The price of tilapia, bangus and galunggong are rising, so government should conduct daily checks and impose price control in public markets. In short, when the problem is supply gap (demand is larger than supply), the solution is politics, not economics.
Economics has a short and direct definition: It is the study of proper allocation of scarce resources (money, time, cars, land, cellphones, etc.) given unlimited wants by people. 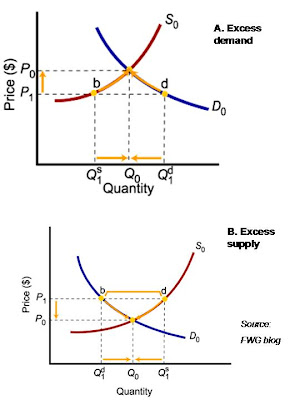 Here are two graphs that one would normally encounter when taking basic economics course. The "universal" supply-demand analysis. Above graph shows supply gap, or excess demand. Many people want the price of tilapia medium size at only P1 (say PhP70 per kilo). The demand is at Q1 (say, 1 million kilos) but at that price, the supply is only at Q2 (say only 0.4 million kilos). So you have a supply gap of 0.6 million kilos as tilapia farmers and sellers will not sell at only PhP70 per kilo because they will lose money.
To solve the problem, allow the price -- do NOT impose price control -- to rise to Po (say PhP85 per kilo) and that's where supply meets demand at Qo (say at 0.8 million kilos). Those who are willing to pay the price will get the tilapia. Those who are not willing to pay the price, they will find other food to buy, like more vegetables, or tilapia small size, and so on.
The second graph is the opposite: there is supply glut or excess supply. The weather suddenly just turns too good for tilapia farming, the price of tilapia feeds just fell, the weeds and other natural food for tilapia in the pond just mushroomed. Result is huge supply of tilapia, and they are of the medium to large or extra-large sizes, no small sizes. But consumer demand for tilapia remains the same. Tilapia farmers and sellers will be forced to sell at a lower price -- no need for government to subsidize the tilapia farmers. What used to be P100 per kilo for large size and P85 per kilo for medium size, will have to be sold at P85 and P70 per kilo, respectively. Then more people will buy the tilapia, they will buy less bangus or chicken or pork. 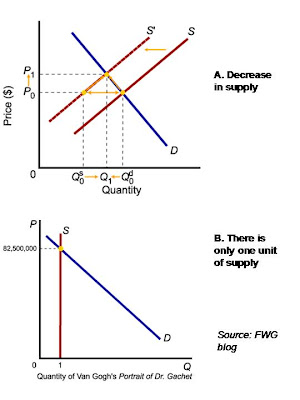 Above graph is when supply declines, say there was a super-typhoon which damaged many agricultural crops. The supply curve of sitao (stringbeans) shifts from S to S', say from 200,000 kilos to only 150,000 kilos. If consumer demand will remain the same, then the price will go up from Po to P1 (say from P20 to P25 per kilo). If government will impose a sitao price control, then there will be a supply gap of (Qo - Q1), say 20,000 kilos. So many people will be looking for sitao at only P20 per kilo but are not available in the public market as the earlier buyers have already snapped all the remaining sitao.
Graph below shows when supply is only one unit. Say a painting by a very famous painter who has died a long time ago. The owner of the painting can choose any price along the demand curve by many people who have different appreciation of the work and have different budget. The owner will naturally sell to whoever can give the highest price. There is no need for government to intervene and force the owner to sell at a capped, lower price so that some not-so-rich buyers can also afford to join the price bidding.
In most if not all instances, government intervention in price-setting (control high price, or subsidize to cause lower price) is totally unnecessary. Price control will discourage existing and future producers and sellers of the product or service that is being price-controlled. Price subsidy will encourage more producers and sellers until taxpayers will revolt at the unnecessary transfer of money from their pockets to the pockets of government cronies.
Extending towards international trade, government intervention in making imported goods expensive via import tax and related charges is not good. It only protects local producers and cronies and raise more money for the bureaucracy but disadvantages the consumers, you and me and our families and friends. The same way, making exported goods cheaper to consumers abroad via export subsidies and other forms of domestic support to exporting companies (done by some developed countries in Europe, North America and Asia) is not good. It is disadvantageous to the taxpayers of those countries, while it may be advantageous to the consumers abroad, like us in the developing world. Such "advantage" of course is temporary as it distorts the production and marketing costs of foreign and local producers, distorts the spending behavior of taxpayers and consumers.
So back to square one: government intervention in price setting, whether domestic or foreign trade, is wrong. Government should not do it, and the public should oppose any government move towards that direction.
----------