* This is my article last Friday in the online magazine,
http://www.thelobbyist.biz/perspectives/less-gorvernment/1324-qbuy-localq-and-the-folly-of-protectionism
-------- 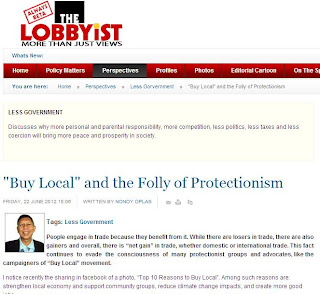 People engage in trade because they benefit from it. While there are losers in trade, there are also gainers and overall, there is “net gain” in trade, whether domestic or international trade. This fact continues to evade the consciousness of many protectionist groups and advocates, like the campaigners of “Buy Local” movement.

I notice recently the sharing in facebook of a photo, “Top 10 Reasons to Buy Local”. Among such reasons are: strengthen local economy and support community groups, reduce climate change impacts, and create more good jobs.

I also have some reasons for free trade and why protectionism is wrong.

1. Filipino producers and exporters of pineapples, bananas, mangos, other fruits will be unhappy if their current buyers abroad would reduce if not stop buying from them as those consumers embrace "buy local" in their countries.

3. “Buy local” creates more local jobs, fine. But when people buy cheaper imported rice and other agricultural products, people realize some savings, they use those savings to buy other goods and services that they may not be inclined to buy if they did not make savings elsewhere,

5. “Buy local” is loving/supporting our own. Yes, we need to support our own, our own lives, our personal interest as consumers. Producer 1 (a Filipino) sells some nice running shirts for P500. Producer 2 (a Thai or Vietnamese) sells a similar running shirt with similar quality for P300 only. Producer 3 (another foreign supplier/exporter) sells similar shirt for P275. Since people love their own selves, then they would know from whom to buy..

Trumpeting "buy local" is not protectionism per se, not yet, but a prelude to it. How would one convince other people and policy makers to impose (or retain existing) tariff and non-tariff restrictions to imported goods if not trumpeting "buy local" as a clear alternative.

A poor household whether in rural or urban areas, benefit from rice free trade. What used to be P40 per kilo rice can be sold for, say, P30 per kilo. That household realizes a “consumer surplus” (the difference between what a consumer is willing to pay vs. what he actually paid) of P10 per kilo. If they consume 2 kilos per day, they realize a P20 per day savings or P140 per week. This household will not throw away that P140 per week consumer surplus. They will use it to buy an extra kilo of chicken, or extra 1.5 kilo of tilapia, or extra 2 kilos of vegetable X, and so on.

So the “buy local” campaign peddles the pernicious and false argument that patronizing imported goods is bad for the economy. In reality, whatever can help the various economic actors to become more efficient producers, ie, producing the same or more output for less input, is good for the economy and the local citizens. If importing better quality tractors compared to locally-manufactured ones will improve the per hectare harvest of certain crops, then the “buy foreign” has contributed to higher economic output, higher income of local farmers.

Trade protectionism, economic nationalism, even cultural purism, do not contribute, or contribute very little, to economic growth and world peace. Free exports and free imports of various goods and services expand people’s horizon and network to other culture and economic system abroad. This contributes to greater understanding of other people in other countries with their specific cultural belief and practices.

A “buy local” campaign may look innocent and harmless because there is no government coercion involved. Not yet. What the campaign is doing is mainly to precondition the belief of other people that “buy foreign” is not good and hence, must be slapped with various restrictions by the government. Or existing restrictions like tariff and non-tariff barriers (health and sanitation reasons, climate adaptation and “save the planet” reasons, etc.) to imported goods should be retained for many more years and decades to come.