Rule of Law 14: Appointing the New CJ of the Supreme Court

One irony of the supposed independence of the Judiciary from the Executive branch in the Philippine government, is that the Chief Justice (CJ) and all other Justices of the Supreme Court, are appointed by the President of the country. Although there is a Judicial and Bar Council (JBC) that shortlists and narrows down the list of nominees for the posts, say from 20+ nominees to only three, the final judgment of who should comprise the highest court of the land still rests in the hands of the President.

It is a legal and technical limitation indeed. But if not the President, who will appoint them, the non-elected members of the JBC? Should Justices of the SC run for elections, say among lawyers, and winners will become Justices of the SC, and they will elect among themselves who will be the CJ? All these are not plausible either. So we have to live with the current set up. Not a perfect one but is working nonetheless.

There are more than 20 nominees now, all of whom have accepted their nomination and many of them are "outsiders", meaning currently not Justices, for the new CJ of the SC. They include a number of officials in the current administration, academics, corporate practitioners.

I am posting two good ideas from two good lawyer-friends. One from current UP Law Dean Marvic Leonen, and one from former UP Law Professor, former DOE Secretary, Raphael "Popo" Lotilla. Marvic and I belonged to the same undergrad organization in UPSE, the UP Economics Towards Consciousness (ETC) although he's one year senior than me. Popo was a former dormmate from Narra Residence Hall in UP. 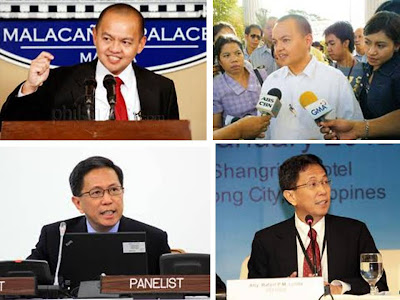 I like Marvic's questions, they are direct to the point. And I like Popo's arguments why he declined his nomination to the post. I believe that all "outsiders" among the current nominees should back out, and consider being nominated as one of the Justices to fill up the vacancy of someone who will be appointed as the new CJ.  Photos, Marvic on the top, Popo below.

Here are the two papers.

10 Questions for Applicants to the position of Chief Justice, Supreme Court of the Republic of the Philippines

Questions to test their command of the law:

(1) What do you think are the various credible ways to "read" the constitution? What is your preferred interpretative modality?

(2) Do you think that the Court improperly flip flopped in the PAL Labor Case? in the League of Cities Case? Would you think that this would impact on final and executory cases pending in lower courts or cited as precedents in the future? What measures, if any, would you seek to introduce to prevent these incidents to happen again?

(4) Do you agree with the current state of jurisprudence relating to media and the courtroom? Why or why not?

(5) Do you believe that constitutional rights to privacy are unduly infringed if foreign currency deposits of public officials are made public? Why or why not?

(6) What is your position on affirmative action and minority rights?

Questions to test the managerial knowledge of the candidate.

(7) What interventions, if any, would you introduce to speed up the delivery of justice in all our courts? Why do you think these interventions have not been introduced or completed in the past?

(8) Recent studies in law and economics point to the importance of administrative fees both to filter cases and to enable the litigants to internalize the costs of litigation. Do you agree in changing the basis of docket fees so that it becomes a percentage of the networth of all the plaintiffs rather than on the nature of the litigation? Why or why not?

(9) Do you agree with the proposition that it would be better if the President named his choice for a judicial position and this be vetted by the Commission on Appointments rather than by the Judicial and Bar Council? Why or why not?

(10) Can you give us a briefing of the various reforms put into place by various Chief Justices in the past to increase access to justice? What additional interventions, if any, would you introduce?
--------

I have considered thoroughly the nomination that you have submitted to the Judicial and Bar Council, and I can only express to you my sincere thanks, but regretfully have to decline.

In the past, I took the position that in a highly politicized context as in the Philippines, appointment to the office of the Chief Justice based on seniority is a tradition that minimizes the jockeying for appointment from within and outside of the Court. I still have to be convinced of the wisdom of departing from that view.

Without any legal compulsion behind it, this tradition was, in instances few and far between, set aside. But, time and again, its restoration has been welcomed with relief, like a lost valued symbol of character regained anew. Today, we have an opportunity to restore the tradition—or completely to overturn it. It reminds me of a story told, apocryphal perhaps, that the much venerated Justice Jose B.L. Reyes—who was older in age but less senior in tenure in the Court than the respected Roberto Concepcion—was considered for appointment as CJ to allow him to occupy the Court’s highest position. J.B.L., it is said, would have none of it.

The tradition of seniority has a way of muting political ambitions and insulates to some degree the office of Chief Justice from the patronato system. Over the long term, particularly under future presidencies whose virtues we are unable to anticipate at this point, adherence to the principle of seniority may still be our best option. Restoration of the tradition, which is entirely of Philippine innovation, would then shift the national focus to the quality of every future appointment to the Court, and away from the position solely of the Chief Justice. Would not this be in better keeping with the collegial character of the Republic’s Supreme Court?

I suggest that only for overwhelming reasons, such as the inability of the incumbent members of the Court to redeem themselves and the institution, should we consider appointing from outside of the Court. Whether these weighty considerations exist, the appointing power can be a better judge from the unobstructed view of the leader’s lair. But my own individual assessment is colored with undisguised optimism: that the members of the Court, individually and as a collective, have distilled from recent experience lessons of primordial import for rebuilding and strengthening national institutions including the Court itself.

Wishing you all the best with a reiteration of my profound thanks,