There is a section in RA 9502 or the Cheaper Medicines Law (2008) that allows for the creation of the DOH Advisory Council for Price Regulation. I have written about the Council and the discussions there about the imposition of drug price control (or regulation) since June 2009, see Health Choices and Responsibilities, pages 2-13, then pages 63-76, of the book.

Some photos of the Council meeting sometime in 2009, below. 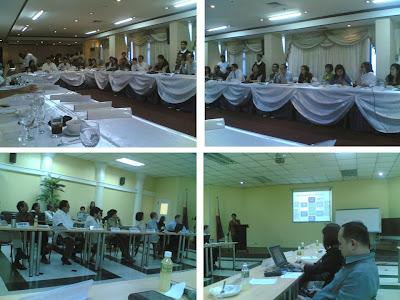 After about a year, then presiding officer of the Council, former DOH UnderSecretary Alex Padilla, now PhilHealth CEO or COO, moved that the Council be transformed from Price Regulation into "Advisory Council for Healthcare". There was consensus among members of the Council -- representatives from different industry associations (local and multinational pharma, drugstores, hospitals), professional associations (medical, pharmacists, other government agencies, and NGOs -- to support it.  That is because there was general consensus among the members that price control and regulation only distorted an already downward trend in medicine prices due to more competition among more players with more products introduced into the market. And price control did not really achieve its goal of making some essential medicines be more affordable to the poor, for some really poor people, they want the price to be zero, not just 50 percent cheaper of its original price. But the policy was carried out due to politics leading to the May 2010 Presidential elections.

The first three were active in the deliberations and enactment of RA 9502 while MGT is invited despite its being an "outlier" to help provide wider and broader range of perspectives in many public health discourses. For instance, MGT is perhaps the only NGO and think tank in the Council that explicitly argues for "less government" in Philippine society. MeTA Philippines leadership is also invited from time to time to the Council.

Below, upper photos, another Advisory Council meeting, chaired by former DOH USec Alex Padilla and DTI Assistant Sec. Baua, and one of those slides presented during the meetings. Lower photos, during the public hearing of the Congressional Oversight Committee on RA 9502 at the Senate, May 10, 2012. USec Padilla and ASec Baua were among those who spoke there. 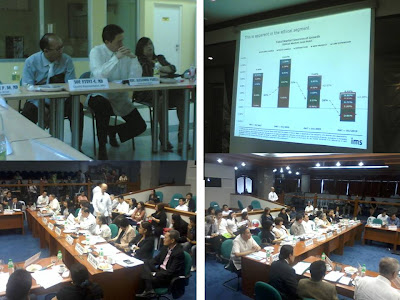 During the Congressional Oversight Committee meeting last month, chaired by Sen. Manny Villar and co-chaired by Cong. Albert Garcia, Cong. Ferjenel Biron looked down on the role of the Advisory Council. Compare the nature of the Council vs. Cong. Biron's perspective.

The Council meets only on occasions where in the judgment of the DOH, there are important health matters to discuss that requires broad discussion and information from multi-sectoral participants. Hence, the Council has  no regular meeting, is not a permanent bureaucracy with its own set of regular bureaucrats. I think all members of the Council are comfortable with it.

Cong. Biron on the other hand wants a more permanent bureaucracy, the Drug Price Regulation Board (DPRB) with its own set of permanent bureaucrats. Based on his actuations and hard-sell eagerness to push it, I think he positions himself to to head that bureaucracy someday should it become a law.
--------

In my discussions with some health NGO leaders, like those belonging to the Coalition for Health Advocacy and Transparency (CHAT), the civil society partner of the Medicines Transparency Alliance (MeTA) Philippines, I always emphasize the importance of coupling right and responsibilities. Former DOH Secretary Alran Bengzon also emphasized this when he gave a talk several months ago, sponsored by AGAP. Rights and responsibilities are twins in the healthcare (or any other social/public policy) issue/s.

Consider this. Even if government will provide free medicines, free hospitalization, free diagnostic tests, free physician consultations ("health is a right" kasi) but if people do not take care of their body and that of their households, do not observe even very basic sanitation, health outcome will remain poor. We do not need the DOH or WHO or PhilHealth or the provincial/city hospitals, to tell people that over-drinking, over-smoking, over-eating, over-sitting, living in dirty places, etc. is bad to one's health. Healthy lifestyle, or preventive healthcare, is a lot more cost efficient, more useful, in attaining good health outcome for the population. 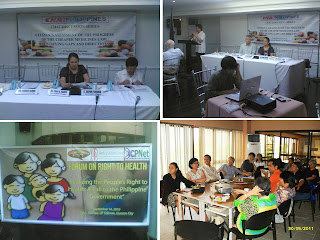 Below, upper photos, the Pharmaceutical and Healthcare Association of the Philippines (PHAP), in partnership with CHAT, also organized a social dialogue with civil society organizations (CSOs) on universal health care (UHC). Lower photos, with Dr. Krisana Kraisintu, an NGO leader in Thailand who was among the recipients of the Ramon Magsaysay Award in 2009. 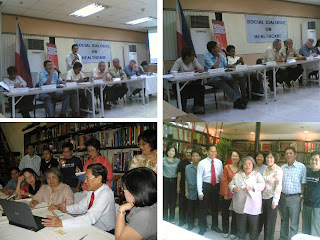 Rights without responsibilities will result in laziness and irresponsibility among the people. I have noticed that  the bulk of public health debates in the past until now, have been focused on curative healthcare -- people are sick, they need cheap medicines, subsidized or free medicines, free hospitalization, etc. -- very seldom on preventive healthcare.

Sometimes CSO leaders appear like politicians. They promise their supporters of this and that social "rights" from the government, and seldom or never tell them they have responsibilities to each right.

There is obligation to each entitlement. If we remove obligations, then we might be building a society of  welfare-dependents and rent-seekers.

I am happy to note that many fellow NGO leaders, at least within CHAT, implictly agree with my above thesis. Why did I say this, well at least they did not debate my above points :-)

In my next paper on "Health Transparency", I want to write about the role of MeTA Philippines. Generally they are doing a good job in making medicines pricing, access and availability, become more transparent. Although I think public awareness of the body and its activities remain low.
-------