* This is my article yesterday in TV5's news portal,
http://www.interaksyon.com/article/33570/fat-free-economics-private-sector-not-government-responsible-for-surprise-growth
--------- 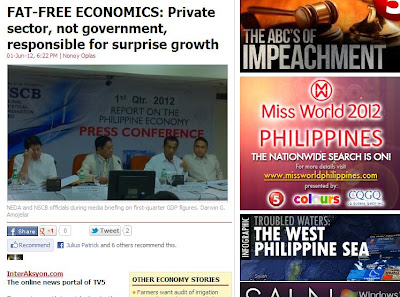 Economic growth is mainly due to the efforts and hard work of the people in the private sector, people who enter in voluntary exchange and trade, and not by endless regulation and subsidies by the government.

This is proven once again by the first quarter 2012 gross domestic product data released by the National Statistical Coordination Board. The Philippines registered a 6.4 percent GDP growth, considered as “second fastest growth in Asia” this year, next to China. Here is the latest data for Asia.

The National Economic and Development Authority in its official statement said thus:


Growth for the quarter was supported by accelerated government spending (including for infrastructure and CCT spending), low prices which supported household consumption…Construction (3.6%) surged due to the upbeat performance of public construction (62.2%), which offset the contraction in private construction (-9.9%)…. Robust government consumption (24.0%) was driven by the strong momentum in spending for maintenance and other operating expenditures (MOOE) of the government… The government’s effort at fleshing out lump sum funds and the advanced procurement activities of government agencies facilitated the hefty year-on-year growth for public construction (62.2%).

This self-congratulatory statement by the government through NEDA is understandable since they are the ones that report out these data.

PCE constitutes 70 percent of GDP. At such a high level, even if government consumption, capital formation or investments, and net exports will slow, if PCE grows fast, GDP can grow fast.

Over the past four years, PCE has pulled up the overall GDP growth, except in 2010, an election year. That year, 1Q growth was pulled up by government consumption which grew by an astonishing 21.4 percent, resulting in GDP growth of 8.4 percent.

If PCE is the main driver of GDP growth, what drives high PCE? The most obvious candidate is from OFW remittances. Last year, more than $20 billion came in via official channels as monitored by the Bangko Sentral ng Pilipinas. The actual amount should be larger as people bring in cash and checks when they come home, or their friends and officemates from abroad come home. For January-March 2012, some $4.84 billion were already remitted, higher than January-March 2011 level of $4.59 billion. It is safe to project some $21.5 to $22 billion in remittances this year based on past trends.

The other main sources of high foreign exchange inflows into the country that translate into more PCE,are tourism - both foreigners and returning Filipinos - and the fast-growing sectors like business process outsourcing.

There are several points and lessons to note before the public will be hoodwinked into believing government’s self-congratulatory pronouncements on economic growth.

One, hard work and efforts by the people in the private sector both here and abroad (the OFWs), and not more regulation, subsidies and taxation by the government – local and national - bring economic growth, despite trying times regionally and globally.

Two, continued economic uncertainties in Europe and North America because of their huge public debt burden as a result of decades-long fiscal irresponsibility and over-spending, presents a good opportunity for the Philippines. Invite those entrepreneurs, investors and professionals looking for other places to invest, to come to the Philippines via less bureaucracy and less taxes.

Three, as an offshoot of the removal from office of the heavily tainted former Chief Justice of the Supreme Court, government should focus its energy and resources more on transparency and accountability, to enforce the rule of law, protect and enforce private contracts and private property rights.

Giving jobs to the unemployed and underemployed, lifting the poor from poverty, can be done by the private sector and the poor if they help themselves. Giving endless perks to a thick layer of the bureaucracy, giving endless subsidies to people including those who hardly help themselves, is not a good way to give justice to the people who prop up 70 percent of the economy and are endlessly taxed for so doing.
-------