This is my article today in TV5's news portal,
http://www.interaksyon.com/article/35395/fat-free-economics-traffic-car-pooling-and-ltfrb
--------- 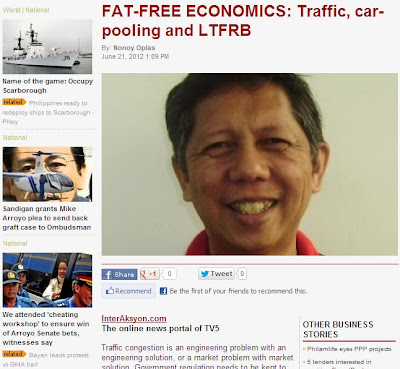 One major cause of traffic congestion is the big volume of private vehicles on the roads. And one major reason why people drive their cars in going to work or bringing their kids to school, is because the public transport system is inefficient in many places. If one will take three to four rides from house to office, and take the same number of transfers going back home, many people who have cars would rather drive their vehicles than endure such inconvenience and high fare costs.

One transport innovation that was invented in many private elementary and high schools is car-pooling via school bus or vans. These well-marked vans, accredited by the government and the private schools, would pick up young students from their house to their school and back. It frees the parents and guardians of precious time, fuel and car maintenance in driving the kids to school and back. The kids are also able to socialize with each other inside the vans.

This system can apply to university students and working people. House-to-house pick up of passengers and bring them to a few drop-off points near their universities or offices.

Presently, the government, through the Land Transportation Franchising and Regulatory Board does not recognize or approve this scheme The closest scheme that they allow is the garage-to-terminal or terminal-to-terminal system. This means that people who live in gated villages or in faraway subdivisions, still need to be brought to the buses’ or vans’ terminal by car, tricycle or jeepney.

If the school bus type of car-pooling will be applied, many university students and working people will not be driving their cars or motorcycles everyday. If car-pooling is made more convenient, then many people will gladly leave their cars at home and just sleep or do something else while inside the vans. And road congestion, parking congestion, will be significantly reduced. They can use their cars on weekends or in evening activities.

This new scheme will require new changes on the public transportation system. One, transport branding (bus or van line A, B, C, etc.) will be encouraged and these companies will become more transparent and more accountable to their passengers and clients, as well as to government law enforcement agencies.

Two, route monopoly and oligopoly – by tricycles, trisikad/kuliglig, jeepneys and buses – as assigned by the LTFRB - and the municipal/city government in the case of tricycles – will be disbanded.

Three, fare regulation will be abolished too. Competing brands or bus/van lines will offer good quality units at reasonable fares in order to attract more clients. There will be no need for the government to mandate certain fares as the passengers themselves will decide which bus/van line will offer them the cheapest or more reasonable fares based on certain quality of services (new vans, wider seats and legroom, etc.).

Four, the procedures, taxes and fees to get a bus/van line franchise should be kept to the minimum. Offering a service to the public like car-pooling is not a criminal activity and hence, should not be penalized with circuitous processes, multiple taxes and fees, and bureaucratic red tape.

It is the LTFRB that will most likely offer the stiff opposition because their regulatory powers to (a) give franchise to individual jeepneys and vans, (b) set route monopoly or oligopoly, and (c) set fares will be diluted if not abolished.

Fare setting should be depoliticized and debureaucratized. Companies that offer better services like more modern and more comfortable vehicles, more courteous drivers and fare collectors, drivers who obey traffic rules and have minimal to zero involvement in major accidents, can charge higher fares. Those who have older and less comfortable vehicles can charge lower fares.

The commuting public, support groups like NGOs, media and local politicians, can convince the LTFRB and LGU bureaucracies, to drop their opposition. The scheme is working well for private school car-pooling, it can work in car-pooling for working people and university students.

This does not mean zero role for the government transportation agencies like the LTFRB and DOTC. If public transportation providers violate their contracts with their passengers – say hiring reckless drivers or not maintaining their vehicles in good condition, resulting in some major accidents causing injuries if not death to passengers – government comes in to enforce contracts, to promulgate the rule of law.

Less government intervention and monopolization, and more economic freedom, more competition among private enterprises, is the best way to lessen traffic and pollution.
--------