This is my article today in TV5's news portal,
http://www.interaksyon.com/article/34803/fat-free-economics-p2-trillion-of-taxes-new-debts 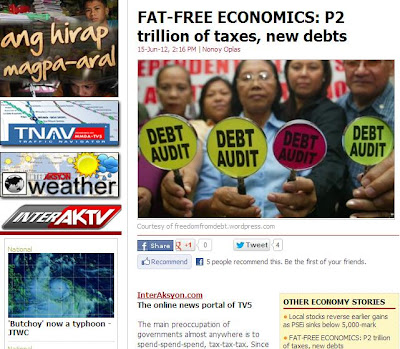 The main preoccupation of governments almost anywhere is to spend-spend-spend, tax-tax-tax. Since tax revenues are often not enough, they resort to borrow-borrow-borrow. And a vicious cycle of over-spending and over-borrowing, of fiscal and governmental irresponsibility, is set into motion, acquiring its own life, sustained year after year, administration after administration.

This is seen in many countries in Europe, North and South America, and Asia, including the Philippines. Our government’s gross debt stands at 40 percent of GDP. While this looks bad, there is good news to it somehow, because it used to be 60 percent of GDP about a decade ago.

The PNoy administration has hinted that its proposed budget next year will reach P2 trillion, up from this year’s P1.82 trillion. This means the government will need nearly P2 trillion of taxes and fees from us, the difference to be sourced from new borrowings, what else.

Our problem is that next year is another election year. Politicians in power, from national to local, would spend and spend just to buy and bribe votes, and worry about the spike in debts and possible tax hikes later. Such is the tragedy of governments and democracy.

Below is the over-spending record of the national government over the past 11 years. Budget deficit means expenditures are larger than revenues, a typical attitude of living beyond one’s means and charging the difference to new borrowings.

The main culprit for such overspending and the need for new borrowing, is government debt itself. Interest payment constitutes 20 percent of the annual budget. Here is a quick view of the biggest departments and expenditure items this year and the past two years. 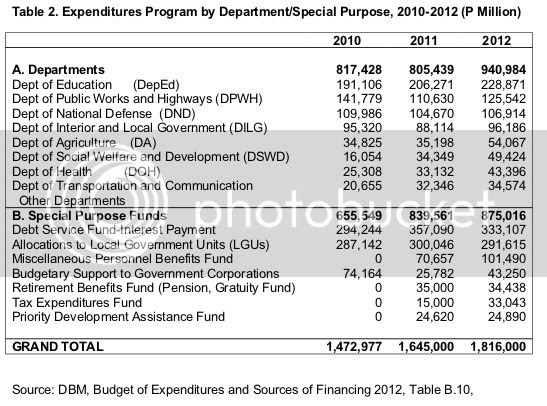 DepEd, DPWH, DND and DILG, interest payments, internal revenue allocation of LGUs and various benefits to the million-plus national government personnel - they are the largest expenditure items this year.

The bulk of new spending in 2013 would include expanding the conditional cash transfer (CCT) program of the DSWD, from P34 billion this year to roughly P45 billion next year. The DSWD budget is projected to rise from P49 billion this year to P67 billion next year. Since the CCT is mainly a dole out program with some “conditionalities,” it is clearly a big tool for electioneering and legal vote-buying next year. The administration will of course object to the term “legal vote buying” but that’s what it really is.

Perhaps a big question to ask is, Is there room to retain, if not shrink, government spending in the next few years?

Many advocates of more and bigger government say that the Philippine government’s spending is actually “small” compared to many countries around the world, like its neighbors in Asia. See the numbers below. 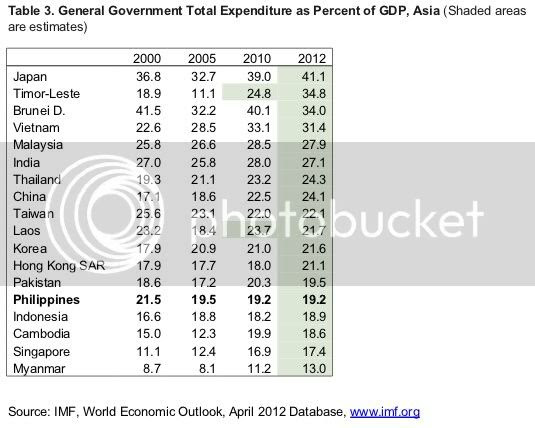 What is wrong with the above numbers for the Philippines and other governments?

If these expenditures are included, it is safe to estimate that overall and consolidated Philippine government spending would reach about 24 percent of GDP. That is not “small.” It comprises nearly one fourth of the total production of goods and services in the economy.

Reducing the fat in government spending and fiscal irresponsibility is a tough job to do and campaign for ordinary mortals (a.k.a. average taxpayers in the private sector). But we have to start somewhere. We need to help educate the public that more and bigger government spending, regulations, restrictions and taxation, are not good, are not productive. They siphon resources from private pockets and savings to politicians and bureaucrats’ spending whims.

Many social and economic services are better served and met by assigning more personal and parental responsibility to the people, not more government responsibility. The latter is a convenient excuse to justify endless government waste and greed. We have to learn to say “no” to such wasteful government advances and coercion somehow, somewhere.
--------