Disputes and misunderstanding are common among people. That is because people are different from each other, in personal, cultural, religious, economic and political belief. The more people in a community, in a country, in the planet, the more diverse personalities there are, and the wider the range of diversity among people.
It is important that people should learn to respect and tolerate such diversity in whatever views. Resorting to violence like killing and murdering those one does not agree with, is a primitive way of settling disputes. Unfortunately, such crimes are still committed very often these days.
Below are photos of accused individuals for crimes of murder to massacre. They are no ordinary criminals though, they were high level local government officials and a legislator. 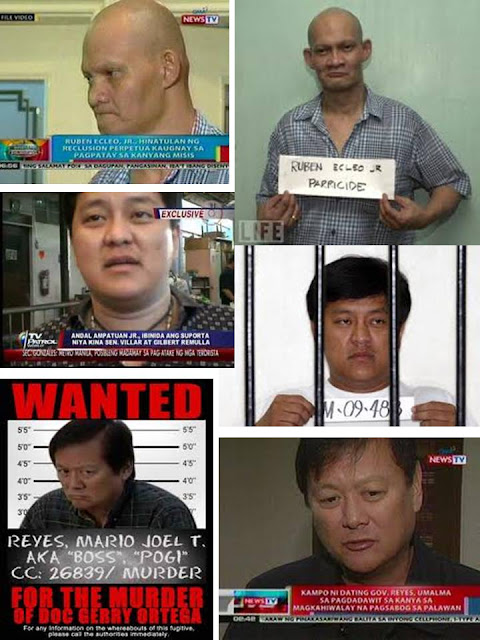 Mr. Ecleo has been convicted of parricide, he killed his wife, Alona Bacolod-Ecleo. He has been hiding for many months now. Last week, House Speaker Feliciano Belmonte said that his name has been dropped from the roll of members of the House of Representatives. Here is the recent report about him.


MANILA, Philippines - Dinagat Island's Ruben Ecleo Jr, who has been convicted of parricide, is no longer a member of Congress.
His name was dropped from the roll of members of the House of Representatives, Speaker Feliciano Belmonte Jr. informed reporters on Friday through a text message....
Judge Soliver Peras of the Cebu City Regional Trial Court  Branch 10 found Ecleo guilty of killing his wife Alona Bacolod-Ecleo, a third-year medical student.
Ecleo, the supreme master of the Philippine Benevolent Missionaries Association, was sentenced the penalty of reclusion perpetua or imprisonment of 20 years and one day to 40 years. He was also ordered by the court to award over P25 million in damages to Bacolod's family.

Mr. Ampatuan is the prime suspect of the "Maguindanao massacre" where 58 people were killed in broad daylight on November 23, 2009, municipality of Ampatuan, Maguindanao. The victims were the family members of his potential political rival for Governor of the province in the 2010 elections, plus members of media, and some ordinary citizens whose vehicles accidentally followed the vehicles of the victims. The other suspects of the heinous crime were his father, then Governor of Maguindanao at that time, Andal Ampatuan Sr., and other siblings. Below is among the most recent stories about the case.

A man who testified in court on the Philippines' worst political massacre was found dead "probably chain-sawed to pieces" in a killing meant to silence other witnesses, an official said Friday.

Esmail Amil Enog went missing in March after he spoke in court last year about the alleged role of a powerful political clan in the November 2009 murders of 57 people, prosecutor Nena Santos told AFP.
"The body was put in a sack and it had been chopped up, probably chain-sawed to pieces," Santos said, declining to give further details about when and where the body was found as it might endanger lives.
"If we mention someone he might also end up dead."...

Mr. Reyes is accused of the murder of environmentalist-broadcaster Gerry Ortega in January 2011. He has been hiding for several months now and has been declared a "fugitive" by the police and DILG Secretary Robredo. Here is one report about this case.

"He is a fugitive now... I have already organized a team to track him down," Interior Secretary Jesse Robredo told GMA News Online.

Reyes should come out and surrender because hiding would not resolve the murder case against him, the Interior secretary said. Robredo issued the appeal once again to Reyes on Friday...
Reyes, his brother Marjo Reyes who is the mayor of Coron town in northern Palawan, and two others are wanted for the Jan. 24, 2011 killing of Ortega in Puerto Princesa City....
Rule of men, not rule of law.  This is what these accused or convicted criminals and their supporters/followers want. By running away from their case (Mr. Ecleo and Mr. Reyes) instead of facing their accusers in court, they make a mockery of the justice system in  the country. And the Philippine government, through the Philippine National Police (PNP) and other local government officials, is showing its inefficiency in promulgating the rule of law, the longer that these and other accused criminals are not arrested.
--------