Many politicians and legislators want to impose various mandatory price discounts by private manufacturers and sellers to certain sectors, mandatory benefits by employers to their employees. The politicians get the political credit, at no cost to them. Such is the case for drug price control, senior citizens' discount, persons with disabilities discount. And now, a proposal to make the paid maternity leave raise from two to four months. See this news below. 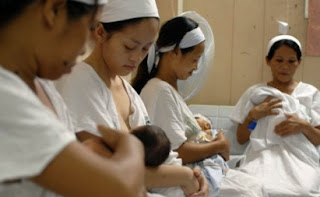 House Bill 6128 seeks to give mothers more time to breastfeed their children. The United Nations Children's Fund (UNICEF) and World Health Organization (WHO) say it would be ideal if mothers could breastfeed their babies for at least six months after birth.

"This will give mother and child quality time for bonding while at the same time ensuring the child's proper growth and development," the Arroyos said....

This is another idiotic bill by the mother-son tandem in Congress. If this becomes a law, many companies will adjust, like paying women lower pay in anticipation of prolonged paid leaves, or they will hesitate hiring plenty of women. And the women themselves, the supposed beneficiary of this measure, will be disadvantaged. It is not legislators Gloria and Dato Arroyo who will pay for the extra 2 months of paid maternity leave, companies will.

Government should step out of making these mandatory benefits. Allow them to give benefit packages based on their income and profitability. Struggling companies should not be arm-twisted by the government to give certain packages that can drive these firms to lay off workers, if not move towards bankruptcy.

A company hiring people and giving them stable jobs is a benefit to workers already. Companies are also scared of losing their hard-working personnel, so they offer various benefits other than those mandated by various labor laws, to keep these hard working and efficient staff. Now if workers and employees are not happy with their current employers, then they can consider getting out and become self-employed with some micro- or small-scale entrepreneurship. When their enterprise has improved, they can start hiring other people and give their workers certain benefits that they can afford.

When the employers or employees violate the stipulated contract between them, that is where government via DOLE can come in, to enforce contracts, to promulgate the rule of law.

A lady living in Vancouver, Canada, also replied to this news report saying that in Canada, maternity leave is one year and they get full benefits. That they pay high taxes but they can see where the money goes, that they have free medical care, roads are well maintained, school system is not bad.

Cool. Things are nice and well in Canada, it should be attracting hundreds of thousands, if not millions, of migrants each year, and its natural population growth is also high and not suffering from greying population, there is baby boom as mothers can easily produce more offspring with lots of subsidies and support from the government.

But I think this is not happening. While the government gives lots of welfare and subsidies, the government also takes a lot from the people, which makes life somehow hard for them.

Many governments in the developed world also make it difficult and costly for couples and households to get a nanny for their kids with oodles of regulations and restrictions. This is what my German friend told me. He can afford to pay the minimum wage for a nanny, even higher. But then he also has to pay extra -- unemployment and social security insurance, health insurance, pension contribution, etc., so that it becomes very expensive to hire a nanny.

The lady from Canada said that while the CIC imposes various requirements to protect the rights of the nannies, it is the Philippine government through the POEA that makes it almost impossible -- via red tape and certain bureaucracies --  for a nanny to be able to work in  Canada.

I think she is right here. The POEA can be one hell of an intrusive bureaucracy that imposes various restrictions and regulations for prospective employers as if its bureaucrats are the ones to be hired abroad.

On another note, former party-list Congressman, socialist labor leader, a friend in facebook, Rene Magtubo, posted in his facebook wall,

I replied,  Get out being an employee. Be self employed. The carinderia owners, tricycle operator-drivers, palengke vendors, they have no employers but themselves.

While it is easy to blame and attack the capitalists and the entrepreneurs, it is hard to become one. To be an entrepreneur, one has to deal with (a) suppliers of raw materials/intermediate goods, (b) consumers and clients, (c) creditors or banks, (d) office/shop rental, electricity, water, (e) employees, (f) competitors, current and future, (g) national government bureaucracies, (h) local government bureaucracies. Each year, sometimes each month or each day.
To be an employee, one has to comply only with the demands or requirements of your employer or boss and that's it, get the salary  and other benefits mandated by various labor laws.
That is why to be an entrepreneur is not for everyone. And corporate expansion, or corporate bankruptcy, is a reality for all. There is only one institution that does not go bankrupt -- government. Administrations and political parties can lose or decline, but government and its various bureaucracies can never go bankrupt. And that is how populist politicians in government thrive, like the Arroyo mother-son tandem proposing idiotic bills.
--------

These mother and child tandem is really doing something to gain the favor of the people. I must say that what they're proposing is really good.

I cannot disagree more... For someone who has a kid, you do seem oblivious to the plight of pregnant women and women who has just given birth. I bet your wife had to drag herself back to work too. Any sane mom would rather spend their time with their months-old baby rather than toiling away at work if they can afford too. That's why government should make longer maternity leave's mandatory coz there's no way it's going to benefit companies. You are looking only at the company's welfare, rather than the parents and the baby. Four month's maternity leave should be a right, not a privilege.