* This is my article yesterday in the online magazine TL. The photos at the bottom are not part of the original article.
--------- 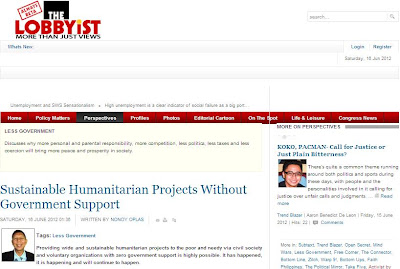 Providing wide and sustainable humanitarian projects to the poor and needy via civil society and voluntary organizations with zero government support is highly possible. It has happened, it is happening and will continue to happen.

I will give examples from Rotary because there are really huge projects going on there. I am referring to the new initiative of the Rotary International (RI), the Global Grants (GG). This is a new initiative, taking lessons from thousands of humanitarian projects in the past from many rotary clubs from many countries.

GGs’ general characteristics are. One, they are meant to finance sustainable projects for the needy people, meaning after the term of the Club President who initiated the project has ended, the project is still there and is able to generate certain funds for its continuation year after year.

Two, minimum project cost is US$30,000, no more projects worth $5,000 or $20,000. A club in a poor country finds a partner club/s in a rich country, their respective RI Districts pouring additional funding, and a worthwhile project involving public health, water and sanitation, education and literacy, economic livelihood, peace and conflict resolution, will get at least $30,000 of funding that are quickly paid so long as all the requirements are complied with.

Project components: (a) Maternal and child health, (b) disease prevention and treatment, (c) basic education and literacy. A club to club partnership between RCs Cavite and Louisiana, USA. The local club gave only $100, the minimum club counterpart, the respective districts where the two clubs belonged gave their respective DDF, plus donations from other Rotarians. Status: Paid and closed.

Project components: (a) basic education and literacy, (b) water and sanitation, (c) disease prevention and treatment. The local club, RC Cavite Ecozone gave only $100, but its partner RC abroad, plus the DDF of both districts gave a lot. Status: Paid and closed.

The project is mainly for disease prevention and treatment in poor communities, hence mobile machines and clinic. The main recipients are the Philippine General Hospital (PGH) and the Baguio General Hospital (BGH).

The project addresses (a) disease prevention and treatment, (b) maternal and child health, among others. It is a multi-year, on-going project.

There are many other success stories of wonderful projects funded by GGs in each district (there are 500+ RI Districts worldwide). I only mentioned a few above. The impact on the poor, the less or un-educated, the sick, the old, etc., is huge. Project implementation is direct people to people, no government bureaucracies in the middle (barangay to municipal/city to province/congressional politicians and bureaurats) that can hijack such projects towards their personal political interests. There are also no additional taxes, mandatory fees and contribution from the citizens, rich or poor, to be coercively collected as all funding come from voluntary donations and various fund raising activities.

GG funds, $30,000 to $143,000 or more, are quickly released if all the requirements are complied with. Project and fund management is made more transparent, all transactions and proof are paperless and visible on the web, an external auditor aside from internal monitoring will be needed. Any irregularities can easily be checked due to both internal and external controls.

How about those found mishandling or stealing the money? Will they go to prison? Possibly yes, if criminal charges will be filed against them. But normally, just exposing the names, faces and club affiliation of those people is enough punishment. Rotary is a voluntary organization of relatively successful professionals and businessmen. No one put a gun on members’ heads to join it, pay annual dues, attend regular meetings and spend extra for the meals, attend club projects and district activities. Members came and joined on their own, voluntarily. So it is a highly collegial, peer system of camaraderie. If one will commit fraudulent acts on money that are voluntarily donated, the idea of losing one’s face, of losing professional and business integrity and network in such a big and international organization, is a severe form of punishment.

And this is one beauty of voluntary, civil society organizations. The traditional schemes of reward and punishment under the government system of coercion and politics, like sending people to jails if they are not politically connected, or getting scot free if they have wide political connections even if they are outright thieves, does not strictly apply.

The state of civil society, being largely a voluntary action and organization of mature and responsible citizens, is the path that we should take, not the state of more government coercion and politics.

First speaker who spoke about the Global Grants was D3810 Immediate Past District Governor (IPDG) Tranquil S. Salvador III, a young and articulate leader. He was given a plaque of appreciation by PDG Guiller Tumangan and DGE Sue Sta. Maria. PDG Guiller was also the second speaker, he briefly spoke about The Rotary Foundation (TRF) policies and programs, and preparing for Matching Grant (MG) application. The third speaker was D3810 PDG Josefina Ang, red dress at lower right photo below. 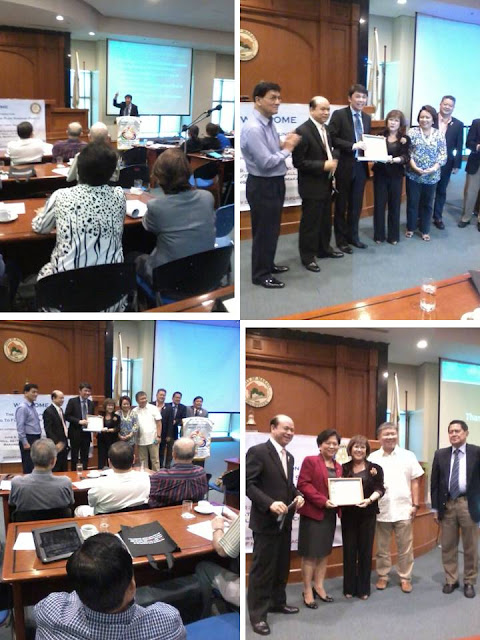 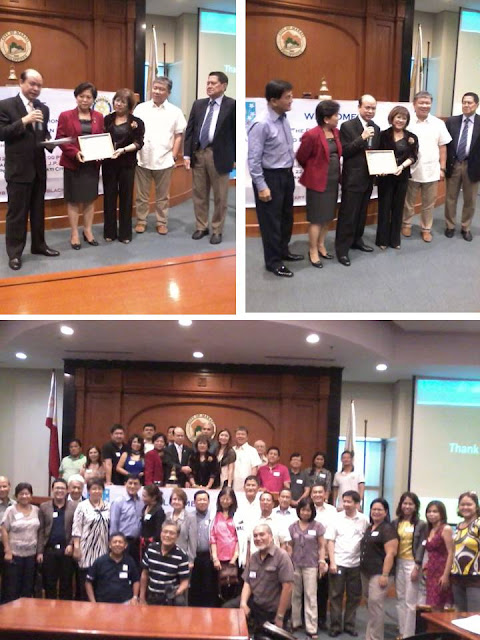