A good article today in BusinessWorld by Reiner Gloor of PHAP, about several hundred new medicines being developed, many of which are still in the laboratories and undergoing various clinical trials, against various types of cancer.

Good healthcare is mainly about having healthy lifestyle, avoiding high intake of risky substances like tobacco and alcohol products, high fat/high calorie food and drinks, early detection of diseases for early and less costly treatment, and new, more powerful medicines against diseases once the latter have developed inside our body.  The production and sale of generic drugs once the patent on innovator drugs have expired, is also an important part of good healthcare.

I also included his paper last year also from BWorld, about the discovery of Insulin. Below, photos of various cancer cells, from top left, clockwise: (a) breast cancer, (b) brain cancer, (c) prostate cancer, (d) a cancer cell being attacked by the immune system, (e) lung tumor, (f) brain cancer. 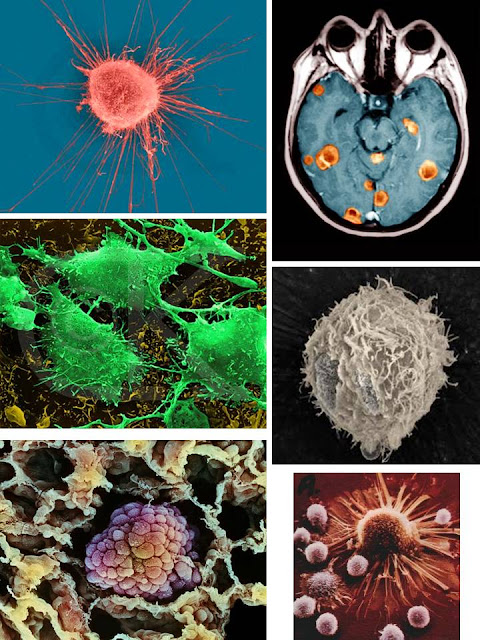 
(1) Medicines in development for cancer

Some do not want to talk about it while others call it the Big C. Experts refer to it as an emerging epidemic as well as a leading threat to global health and development. Whatever it may be called, cancer is no matter to be taken lightly.
Around the world, fathers, mothers, sons, daughters, and friends have lost loved ones to cancer. Men and women, adult and children, and rich and poor alike, are all vulnerable to the disease that has developed into one of the world’s biggest killers.

Cancer, along with cardiovascular diseases, diabetes, and chronic respiratory diseases altogether prematurely claimed the lives of 38 million people in 2008, affecting the developing world and lower-income populations hardest. In fact, about 70% of cancer deaths occurred in these countries where health systems are characterized by high out-of-pocket spending.

In the same year, the World Health Organization (WHO) said that 7.6 million died of cancer, representing around 13% of deaths worldwide. In the Philippines, the GLOBOCAN Project reported that there had been more than 51,000 cancer deaths in the country in 2010.

The GLOBOCAN Project, a WHO initiative provides global incidence of mortality and prevalence from major types of cancer, reported that leading cancer deaths among Filipinos in 2010 include those involving the lung, liver, breast, colon/rectum, leukemia, stomach, cervix, uteri, brain, prostate and pharynx.

There are valid and serious reasons why people fear cancer. For one, there are more than 100 types of cancer that could affect just any part of the body. And, as mentioned, it defies gender, age and socio-economic class. If not detected early on, worldwide statistics would attest to its irreversible consequences. The WHO disclosed that deaths from cancer worldwide are projected to continue rising, with an estimated 13.1 million deaths in 2030.

The regulatory agency assigns the "fast track" status after determination that the drug will have "an impact on the survival, day-to-day functioning, or the likelihood that the disease, if left untreated, will progress from a less severe condition to a more serious one."

Indeed, several milestones have been achieved in the research and discovery of medicines that will cripple the disease. However, the fact remains that cancer will continue to be a public health concern. The commitment to find innovative ways of preventing, managing, or even curing cancer will provide a ray of hope for patients and their families. After all, the search is far from over.


(2)  The discovery of insulin

In 1896, Alfred Nobel caught the attention of the world when he left most of his wealth for the establishment of a prize fund that would recognize men and women whose works would have conferred the greatest benefit on mankind.

For more than 100 years, what is now known as the Nobel Prize has become one of the world’s most prestigious awards for contributions made in the fields of physics, chemistry, physiology or medicine, literature and peace.

Among the awardees in the Nobel Prize in Medicine category were Dr. Frederick Banting and Professor John Macleod whose discovery of insulin came as one of the major breakthroughs in medicine. Prior to the discovery of insulin, people with diabetes survive for few years after following harsh diets bordering on starvation where sugar intake was strictly monitored.

A 14-year-old boy named Leonard Thompson was also key in the discovery of insulin for use in diabetic patients. This Canadian boy was chosen as the first diabetic patient to receive the insulin shots in 1922. He was near death but following the insulin shots, he regained his strength. This led to the expansion of clinical testing to other volunteer patients in Canada who similarly showed positive response to the insulin.

However, diabetes is a disease that affects people around the world, thus large-scale production of insulin is needed. Just a year after Thompson received his first shot, research-based pharmaceutical company Eli Lilly produced enough insulin to supply the entire North American continent.

Pharmaceutical manufacturing is a complex and expensive process that requires technologies, scientific expertise and government regulatory approvals among many others to ensure the safety and quality of medicines and pharmaceutical products. For more information on insulin discovery, visit nobelprize.org.

As discussed in previous columns, most of the food we eat is converted into glucose or sugar that we in turn use for energy. Insulin is an important hormone produced by our pancreas that helps get glucose into the cells of our bodies.

Diabetes happens when there is deficiency in the production of insulin or when the body cannot effectively use the insulin it produces. In the absence of enough insulin, glucose is merely accumulated in the blood.

Diabetes is one the world’s biggest killer diseases along with cardiovascular diseases, cancer and chronic respiratory diseases. It is also the eighth leading cause of death in the Philippines.

As mentioned in the previous column, Type 1 diabetes requires administration of insulin. Insulin may also be given to a patient with Type 2 diabetes depending on his progress and when deemed necessary by the doctor.

Since the discovery of insulin, several pharmaceutical innovations have been introduced to meet the varying needs of people with diabetes. The types of insulin now available work at different rates and periods of time. The doctor will prescribe a specific type of insulin depending on the patient’s response to insulin, lifestyle, food intake, age and weight, and personal preferences concerning sugar control.

The first type of insulin is called basal insulins which keeps blood sugar stable between meals and overnight. It includes intermediate-acting, which could last for half a day or overnight and longer-acting insulins which covers insulin requirements for the whole day.

Meanwhile, mixture insulins contain both basal and mealtime insulins in one solution. They provide blood sugar control at meals, between meals and even at night, depending on the patient’s treatment plan, according to a research-based pharmaceutical Web site.

"Site rotation" or using different parts of the body for each insulin injection is also important. Depending on how quickly or slowly a patient needs the insulin dictates which part of the body he would use as injection site. Insulin enters the blood fastest from the abdomen, a little slower from the arms, more slowly from the legs and most slowly from the buttocks.

Recent pharmaceutical innovations have also paved the way for easier ways to administer the insulin shots. Insulin injections could be through syringes, insulin pens and external insulin pumps.

Remember that insulin comes in only following your consultation with your doctor who will assess your condition. Insulin is not a panacea to diabetes. A healthy diet, exercise, positive outlook, support of family, medicines and when needed, insulin will all play crucial role in determining a patient’s success in controlling blood sugar.

For more information, consult your doctor or you may log on to www.phap.org.ph or www.phapcares.org.ph. Join us on www.facebook.com/people/Pharma-Phap/. E-mail the author at reiner.gloor@gmail.com.
--------


I am really happy to hear this good fact and hope from an experienced who certified company And your comment really gave me hope and courges to do all my best in my study.
Thanks you