* This is my article yesterday in the online magazine TL. The two charts are not part of the original article, I just added them here.
http://www.thelobbyist.biz/perspectives/less-gorvernment/1317-unemployment-and-sws-sensationalism
----------- 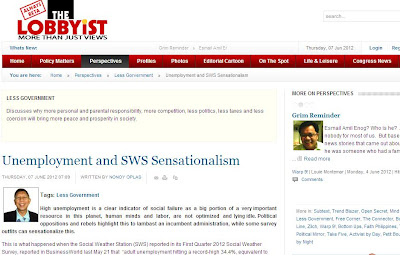 High un-employment is a clear indicator of social failure as a big portion of a very important resource in this planet, human minds and labor, are not optimized and lying idle. Political oppositions and rebels highlight this to lambast an incumbent administration, while some survey outfits can sensationalize this.

This is what happened when the Social Weather Station (SWS) reported in its First Quarter 2012 Social Weather Survey, reported in BusinessWorld last May 21 that “adult unemployment hitting a record-high 34.4%, equivalent to about 13.8 million individuals.”

This was reposted in interaksyon that day, echoing that “Over 13 million Filipinos were reported jobless as adult unemployment hit a fresh record-high in the first quarter of 2012,”

This is sensationalism by the SWS. Just imagine, more than one-third, 34.4 percent, of Filipinos above 18 years old are unemployed, have no jobs, “not working and looking for work.” Can one believe that? Even the three European economies with heavy debt problems and have the worst unemployment situations, Portugal, Greece and Spain, have unemployment rates of only 15 to 24 percent. And the Philippines has 34.4 percent even though we are far out from such debt and financial turmoil as currently experienced by these countries. 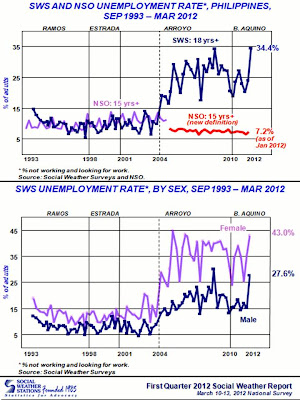 A profile of the SWS unemployed is even more alarming for some sectors.

The figures cited by the SWS and were echoed by the local media is theoretically improbable on two grounds.

One, if so many people have no jobs, many of them and their family will go hungry if not starving already, so they will take even the low-paying jobs, and that will quickly reduce the unemployment rate. Graphically, the labor supply curve will move to the right and it will result in declining average wage rate.

Two, if average wage rates have declined as more workers have become desperate and snap even low-paying jobs, more entrepreneurs will hire more people as the cost of labor is declining, especially for the labor-intensive sectors, and unemployment rate will decline. Graphically, the labor demand curve will also shift to the right,

Empirically, these things did not happen. Local wages are not falling, they are in fact rising, both at the micro and firm levels, and at macro or national levels with the recent rise in wages as approved by the regional productivity boards.

The SWS though also issued a pacifying statement, "if the official definition is applied, then the unemployment rate is 26.1percent." This official definition as adopted by the National Statistics Office (NSO) in its quarterly Labor Force Survey (LFS) means that a person is (a) not working, (b) looking for work, and (c) available for work. By adding the third factor, SWS unemployment rate declines from 34.4 to 26.1 percent. Still, this is a very high figure, even worse than the worst in Europe and the rest of the industrialized world, Spain’s unemployment rate of nearly 25 percent.

How did the SWS exaggerate the unemployment rate in this country? Simple, by removing the distinction between the unemployed and the underemployed among those who have work.

Official NSO data, as of January 2012 LFS showed that (a) unemployment rate is 7.2 percent, and (b) underemployment rate is 18.8 percent. The underemployed are those people who have jobs already, full time or part time employed, but are still looking for additional work, mainly to augment their income.

From the SWS media release posted in their website, they did not introduce the term “underemployment” or the “underemployed.” There are only employed and unemployed people. Their definition of employed are those who are currently working (“may trabaho sa kasalukuyan”).

In many surveys, there is a tendency among respondents to exaggerate their bad plight while understating their positive condition, perhaps hoping that the government will give out more dole outs that may benefit them later. This is similar to people reporting less or no income, hoping that government will not go after them via personal income tax.

So someone who is working five to ten hours a week on average, say a tricycle driver who only brings a few students to and from the school five days a week, would chose to be considered as unemployed rather than employed. Or a person who is taking care of his/her younger siblings at home, a case of “unpaid family worker” would consider him/herself as jobless if asked to answer only whether unemployed or employed.

Since there is this tendency among survey respondents, it would be wise to keep the distinction between the unemployed and underemployed. But the SWS opted not to make such delineation. The result of its very high unemployment rate figure naturally put the SWS on major headlines once more. Similar to Bayan Muna and other sensationalist groups begging for more media mileage, to issue the most scary, the most far out scenarios, which many media outlets tend to buy more.

That 34.4 percent or 26.1 percent unemployment rate by the SWS is simply theoretically and empirically not possible. Because of this, the SWS has unintentionally contributed to economic miseducation of many Filipinos.
----------