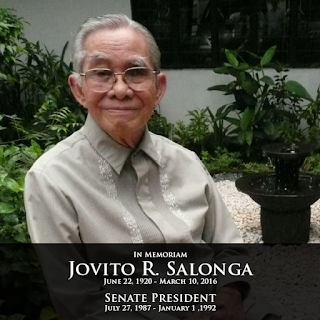 Yesterday, a great statesman, former Senator Jovito Salonga died. I am reposting two comments from two friends, Ted Te, Supreme Court Spokesman, and Adora Navarro, an economist. Posting with their permission. The third paper is a portion the late Senator's lecture in UP some 52 years ago. He spoke like those classical  liberal thinkers several centuries ago, consistent with his being a Liberal Party leader. His focus was on having rule of law in the country, not welfarism, unlike current breed of politicians and legislators.


Salonga: The last of the greats enters immortality
by Ted Te, Thursday, March 10, 2016

…. Bar topnotcher in 1944 (95.3%, tied with his friend and ally Jose W. Diokno) with a law degree from the University of the Philippines, a Masters in Law from Harvard Law School, and a Doctorate in Law from Yale University with a Doctor of Laws Honoris Causa from the U.P. Topnotcher in three senate races, pre-Martial law (1965), post-Plaza Miranda (1971) and post-EDSA (1987). First PCGG Chair. Former Senate President. Principal author of the Code of Conduct and Ethical Standards for Government Workers, the law definining coup d’etat as a felony, and the law defining plunder as a crime, and many others. One of the magnificent 12 who voted to kick out the U.S. bases in 1991 (unforgettable image: Ka Jovy intoning “The treaty is defeated.”)

I am privileged to have met and worked with Jovito R. Salonga in my lifetime…. He wanted to meet to discuss his latest brainchild, Bantay Katarungan, a judiciary watchdog that would screen nominations for the judiciary; this was the concrete expression of his belief that judiciary aspirants must be a cut above the rest in terms of competence, professionalism and integrity, especially on integrity. I and the Robin-to-his-Batman Emil Capulong would meet for many hours discussing his thoughts on how to realize this dream. Much later, this dream would be realized; I would join him for some training sessions involving law students who would serve as monitors. He would later make me an offer to work full-time for Bantay but because I was then neck deep in my advocacy against the death penalty and was handling so many death penalty appeals, I had to decline the offer. I gave him some names and he did consider them, inviting some of them to work for Bantay in the days and years to come….

His human body, ravaged by injuries from the Plaza Miranda bombing and later by illness, kept him from participating for many years in public life; for practically a generation, his name drew no recall. But for those of us fortunate enough to have witnessed this giant among us, his name would always summon memories of a time when a life was a light and that light shone brightly. His passing diminishes us all.  He was the last of the greats. Today, he enters immortality.
Paalam, Ka Jovy. Mabuhay ka!

RIP, ex-Senate president Jovito Salonga. A man of courage and integrity, my idol. Born of poor parents, he worked his way to get the best education possible given his circumstances, was imprisoned and tortured by the Japanese during World War II for helping his compatriots, exposed Marcos' abuses and the start of cronyism in the late 1960s, survived the Plaza Miranda bombing in 1971, survived Martial Law, ran after Marcos' ill-gotten wealth as first head of the PCGG, steered the first post-EDSA Senate through several coup attempts, and publicly opposed Cory Aquino on the US military bases issue. I remember how we rallyists danced in the rain after his last vote locked in the decision to kick out the US military bases in 1991. 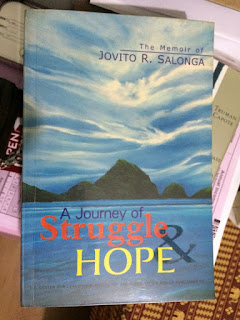 For the younger generation, if you want to know more about him and his contributions to nation-building, I suggest you read his memoir "A Journey of Struggle and Hope." Pay close attention to Chapter VIII-The Start of the Marcos Era, Chapter IX-Militarization and the Amassing of Hidden Wealth, and the tragic Chapter XI-The Plaza Miranda Bombing.

I join a grateful nation in celebrating your life, sir. May we and the succeeding generations of Filipinos always remember your words: "Independence, like freedom, is never granted; it is always asserted and affirmed. Its defense is an everyday endeavor--sometimes in the field of battle, oftentimes in the contest of conflicting wills and ideas. It is a daily struggle that may never end--for as long as we live."

What is a good government? Is it necessarily a government where the mass of public servants are honest and efficient? To my mind, this is not enough for in Italy and Germany during the war years, the great many were honest and efficient. In fact, during the tragic days of Mussolini, the trains in Italy ran on time as never before. The Nazi concentration camp system in Germany was a model of hideous efficiency, It may well be that in Soviet Russia today, the bulk of public servants are honest, dedicated and efficient— even more so than in many places in the free world.

And so, when we talk about Good Government, we should be careful when we discuss it in the context of a free society of free men. In such a society, the law is more than just a set of rules and decrees; it is a system of ordered liberty.

Now, that would involve us, it would seem, in some kind of internal contradiction. Order and liberty are concepts that are apparently inconsistent, when vou have nothing but order, you have the makings of a garrison state and may eventually achieve what has been correctly phrased as "the unanimity of the graveyard.” When you have nothing but liberty, so that everyone is free to do what he pleases, you have no more and no less than anarchy and chaos. The eventual result is the rule of the strong over the weak— which means loss of liberty itself. One is just as bad as the other....
------------