Sensational libertarians and solar power in the Visayas

“Solar power is wrecking the electrical grid in the Philippines, and the blackouts are only going to get worse, according to reports by power grid operators published Monday.

Data from the National Grid Corporation of the Philippines (NGCP) showed that solar power has caused ‘stress’ on the power grid, leading to brownouts and blackouts. The data show that solar power is frying the grid by producing either too much, or too little electricity, triggering failures and blackouts in the Visayas island group of the Philippines.”

wrecking the electrical grid in the Philippines, and the blackouts are only going to get worse", wrong on two counts.

1. Only the Visayas grid, not the entire country.
2. Actual blackouts due to solar power in Negros I think has not happened yet. It may trigger but not caused yet. 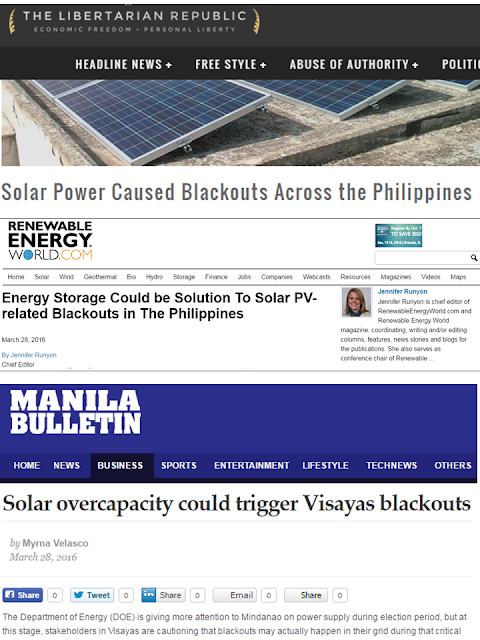 "In Visayas,... too much solar on the grid may lead to blackouts during the election period, which begins today, March 28, and lasts until May 7."

1. It's not the whole Visayas and its 3 regions, but only in Negros island, where there are lots of solar farms.

2. Campaign period, not election period. The former is 90 days for national candidates, 45 days for local candidates. Election is only 1 day, not 90 or 45 days.

3. Official campaign period for locals started March 25, not 28. But the candidates did not go full blast on the 25th as it fell on a Holy Week and did not want to be accused of being epal.

Another source of that lousy article from The Libertarian is the Manila Bulletin, but the MB news item was careful and precise in the title "could trigger blackouts" and not "caused blackouts." http://www.mb.com.ph/solar-overcapacity-could-trigger-visayas-blackouts/

Irresponsible, alarmist articles from libertarian camp is one way to lose credibility. I told some Filipino libertarian friends not to be gullible and irresponsible as the people and groups that we criticize.

The RE law (RA 9513) was enacted in 2008, Gloria Arroyo's time. The feed in tariff (FIT) was granted only in mid-2012, and was finally implemented in 2015. There is not a single administration to blame as ALL admins -- before, during and after the current Aquino admin -- will be singing halleluiah to "more expensive and unstable electricity via renewables please."
-----------------