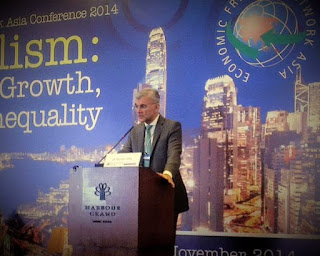 • As liberals, we always face this rather fundamental issue of why at all should we bother to address the issue of income inequality.

• Such inequality has two facets: inequality of outcomes (a “collectivist approach” of typical socialists, communists, or do-gooders) and the inequality of procedures/treatment (eg. rule of law, equality, etc.). We need to clearly distinguish between the two.

• There is also a need to go back to the basics (abstract approach) of Schumpeterian capitalism:

* Capitalism is always dynamic. Schumpeter said that ‘capitalism is a perennial gale of creative destruction’. Enormous progress takes place due to this creative destruction. This is not just an economic cycle but the story of our civilization itself.
* At the heart of this powerful engine of capitalism is the entrepreneur, who is not necessarily a rational, objective person. Several impulses and incentives guide him. This engine thrives on inequality.

* Originally, economic freedom and capitalism was primarily a European idea. Subsequently, it became an Atlantic idea. Later, Asia too has witnessed greater economic freedom and increase in prosperity.
* However, after the GFC, we saw assaults on economic freedoms and increase in restrictions. Capitalism is currently under assault and therefore pessimism is back. GFC saw a shift in policies and approaches: now there is much greater state intervention in both macroeconomic policy (debt, interest rates, deficits, etc.) and microeconomic policies (in the form of governments intervening in the smaller
details of markets like car standards, energy, pollution, etc).
* Note: we need to understand the contrasting takes of Schumpeter and Keynes on capitalism.
* More importantly, what unites such macroeconomic and microeconomic anti-capitalist intervention is the ‘social engineering’ mindset among a small group of high-minded, smart people who think that they can intervene in the micro- and macro-economic and the institutions.
* But such interventions are inevitably counterproductive and harmful because the assumption that these individuals are fully knowledgeable is incorrect because 100% of information is never at their fingertips (much of the real information is tacit and non-formal).
* Rarely are the individuals themselves disinterested in the outcomes. Such interventions (even if beneficial) are deeply offensive to the very concept of freedoms and individuals.

• Given the above, the classical liberal take on inequality runs somewhat like this:

• However, we need to look at the issue of inequality from a different perspective:

* Usually, when we talk about inequality, we usually talk about income inequality within a country and not between countries. While economic liberalization has increased inequality within a country (E.g.: China, city states like HK, Singapore, etc.) it has actually reduced global income inequality (see Surjit Bhalla’s article saying that global inequality is at its lowest since 1850) i.e. between countries.
* Increase in consumption, arising from greater liberalization of economies, has depressed incomes in some areas/countries but has greatly reduced overall inequality both within a country and between countries.
* Education (see S. Bhalla’s article/ppt) actually is a great improver of averages.
* However, a major challenge is the lack of big innovation. Yes, innovation is taking place at a big level but in narrow sectors and benefitting a narrower group of people. The IT sector serves as a good example where companies are getting easy money from globalized markets, and are getting great profits, and therefore are not seeing incentives to invest in innovation in other sectors. For instance,
Apple spends more on lawyers than on innovation of new products. At the same time, even though some people say that innovation results in job destruction, in the long run, innovation actually creates new and better jobs.

• In summary, the current state of affairs, post GFC is as follows:

* at a macroeconomic policy level:
Greater state intervention
Redistributive approach (taxes)
Debt/deficit financing with the threat of inflation always hanging over the head
Central banks interfering in fiscal policies
* Similar state of affairs at a micro-economic policy level also.
* But, such interventionist approach is wrong on a more fundamental, constitutional basis and is based on several false assumptions, etc.

• Therefore, the unfinished business and important pending items to be done to liberalize product and factor markets: Making systems inclusive. (See reformulation by Daren Acemoglu and team on inclusive vs. exclusive systems.) In exclusive systems, esp. in Asian countries, the political and economic freedoms are closely intertwined. One cannot happen without other. Even the city states of HK and Singapore are lacking in innovations. This is because their systems are still bureaucrat-dominated.

• Finally, there is good news and bad news:

* Compared to the past century (1914 to 2014), we have a more prosperous world: we are enjoying greater incomes, better health and better lifestyle overall. While today’s interest groups are still a problem they certainly are not as big a problem as interventionists of World War I.
* But in the short run, post GFC, the pendulum has swung in the wrong direction i.e. towards greater state intervention. However, we should have greater liberalism and lesser state interventions in both micro and macroeconomic policies. 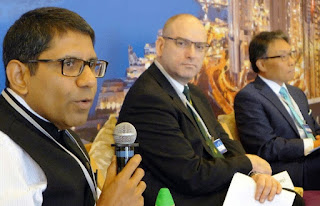 Five points on the Keynote Address:

• While we do understand the importance of education and healthcare in promoting economic growth, we should not make them out as predetermining factors to economic growth. What really matters is economic freedom.

• For example, the 1991-2001 period in India: the actual governmental spending on education came down (due to the economic reforms; till 1997 – after 1997 it again increased afterwards) but the literacy levels improved by 13% (largest ever increase in literacy; in 1991 it was 50%) – despite reduction in state sponsored education spending.

• We need to understand the differences between the ‘old rich’ vs. ‘new rich’. The old rich were focused on lifestyle, etc. But new rich is a different class of people.

• I agree with most of the points made in the Keynote Address. In particular, I liked the big picture. But, I disagree with Razeen’s point that innovation by companies is not taking place and that companies prefer to sit on hordes of cash. We have to understand the factors that influence such decisions by companies.

• In 1997, the East Asian financial crises witnessed the US and OECD countries advising countries like
Korea, Malaysia and Taiwan to reduce the public debt, ‘slim down’, not bail out failed companies, etc. But when it came to the GFC in 2008, they themselves are doing exactly the same! An illustrative example is the bank bailouts. This is nothing but protectionism in another way. So there understandably a great hostility to western advice, western advances and western companies in Asian economies.

• Newer innovations either are not creating new jobs or are actively destroying existing jobs (drones vs. personal courier delivery; drivers vs. Google driverless cars to take same extreme example). Hence, there is greater hostility among the public to such innovations.

• (following Moderator’s question/intervention related to the role of education): Koreans are taught that their country has nothing but human capital. Therefore, it is not surprising that Korea has the highest percentage of college graduates among population – 70%. But, Korea has more cram based education.

• But, there is evidence to indicate that income mobility is decreasing i.e. opportunities are decreasing. Eg. USA is now less income mobile than even Europe.

• The state interventionist approach is distorting this further by gaming the system; the central banks’ interventions and monetary policies are helping rich corporations at the expense of genuine entrepreneurs and smaller scale capitalists.

• The issue of elites and nepotism and favouritism becomes even more relevant in this context. Maybe it is time to examine even radical approaches to ensure real competence and ability is given the opportunity for growth/mobility even within corporations... it is interesting to note that the institution of celibacy in the Catholic Church started not for religious purposes but to explicitly prevent nepotism and favouritism.
------------