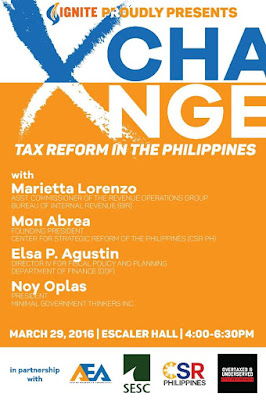 29 March, I will be one of four speakers in this event jointly sponsored by the Ateneo de Manila IgnITE Movement, in partnership with four other groups: Ateneo Economics Association, UP School of Economics Student Council (UP SESC), Center for Strategic Reform of the Philippines (CSRP), and Tax Reform Philippines.
It is also supported by the Tax Management Association of the Philippines (TMAP) and the OGP Fiscal Reform Coalition.

Briefly, my concept of "tax reforms" are in favor of taxpayers and not of the state or government. So minimum or zero income tax as much as possible and government can levy various consumption-based taxes (VAT, GST, excise tax, travel tax, amusement tax, property tax, vehicle registration tax,...) plus various regulatory fees.

I will discuss my two papers published in BusinessWorld, (1) A simple model of raising tax revenues if rates are cut, and (2) PH splitting into many new island-nations. 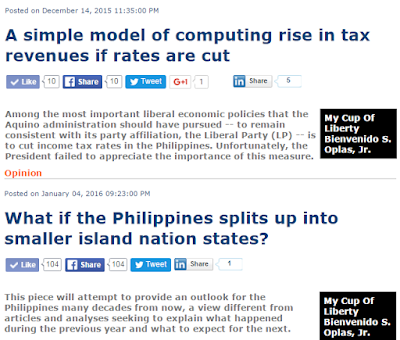 The latter is to encourage tax competition, governance competition, national stupidity reduction, among many new island-nations. This will spare the rest of the PH of plunderers and mass murderers like the Marcoses, Binays, Duterte as their "national leaders."

A "national stupidity reduction" is simply reducing the geographical area that megalomaniacs, notorious central planners and dictatorship-prone politicians -- and their consultants and supporters -- can rule. This way, their chance of ruling the entire PH is significantly reduced because some if not many of them can be defeated in other (new) island-nations. My friend Bernard Ong called this process as “geofencing of nuts”. :-)
-----------