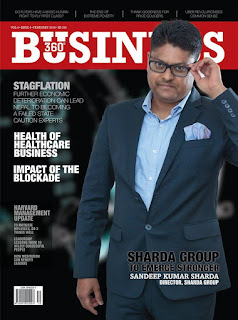 
Asia being mostly tropical, the potentials of hydro power is big, in mainland Asia in general, and in mountainous countries in particular. Dams of hydro power plants not only serve as storage for electricity production, they also impound huge amount of flash flood that can inundate low-lying areas of a country near the rivers.

The biggest producers of hydro power in Asia in terms of high percentage of hydro dependence are Nepal, Bhutan, Myanmar and Vietnam. 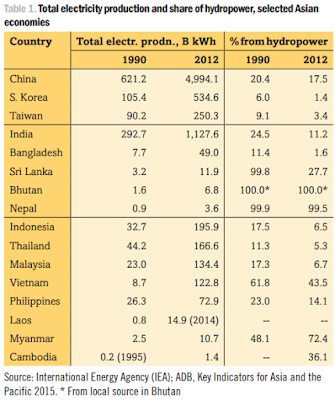 I was lucky to visit Nepal and Bhutan in winter months of 2015.  January in Nepal and November in Bhutan. Electricity supply in both countries are very different. While parts of Kathmandu can experience 14 hours or more of black outs or power outages daily in January, the situation is very different in Bhutan as they do not experience black outs during winter.

One reason why this is so is that  Bhutan has only 0.7 million people while Nepal has nearly 28 million people and hence, demand for  electricity is much larger in Nepal than  in Bhutan.

In terms of actual hydro power production, the biggest producers are China, India, and S. Korea. Bhutan and Nepal are not included in this list below. 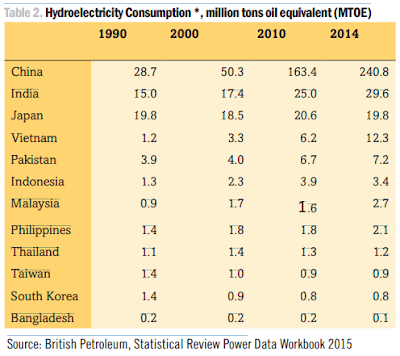 To help address the severe lack of electricity in Nepal during the winter season  and hence,  reduce the need for generator sets, other factors, the following are suggested.

One, expand the capacities of existing hydro power plants by dredging heavily-silted dams, by improving and  modernizing the turbines.

Two, allow private players to build dams and produce hydro electricity. Government resources will always be insufficient to build such huge structures, but government can facilitate the acquisition of right of  way (ROW) like houses and other  structures that stand on the roads or water reservoir. These must be relocated elsewhere. 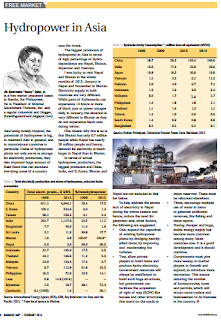 Three, encourage multiple use of water in  dams to generate additional revenues. Like fishing and water sports.

Having cheaper and huge, stable energy supply has become more common among many Asian countries now. It is a good development and it should continue.

Governments must give more leeway to market players to flourish and expand, to introduce more innovation. This means reducing the number of bureaucracies, taxes  and  permits. Which will attract more traders and businessmen to do business in the country.