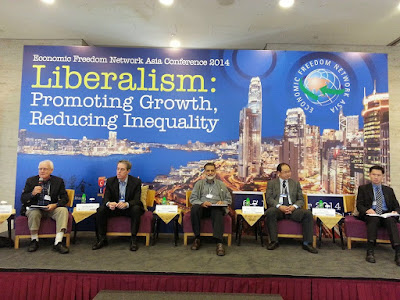 • Hong Kong enjoys a special status and unique advantages. HK has legacy property rights regime rooted in the British colonial system and adds to it the economic dynamism from the Chinese.

• HK was a member of the British Commonwealth till 1997 and many HK laws are rooted in British laws. HK copyright law is one of the first in the world. After becoming the SAR under China, HK has a new IPR regime.

• HK is also a signatory to various (international?) regimes/understandings. A comparison of HK with other countries in the IPRI rankings (and its individual subcomponents’ ranking) shows that HK is favourably ranked against several other countries like Singapore.

• One of the few countries HK is not exporting IP to is mainland China. This is because of the unfavourable IPR regime. Current developments related to new laws, etc. to PR laws – “secondary creations” issue? Issue of property rights protection versus right to freedom of speech. If done well, these IPR regime reforms can help bring in more foreign investments into HK, in the field of intellectual property.

• We also have to take note of the current developments, the “Occupy HK” Movement. This is taking place in the backdrop of certain inherent advantages and opportunities in HK. There are also definite and large threats and risks for HK – if China is not happy with the HK Movement’s demands they might deny easy access to Chinese markets.

* There are certain misconceptions about the ‘Chinese Miracle’ especially that it is based on no human rights or poor human rights (for workers/labourers). But this is simply not true: the Chinese growth story includes in itself a major improvement in working conditions for the workers/labourers themselves.
* At the same time we have to take note of the other side of this story. For instance, the former World Bank Vice-President who happens to be from China had said that there is no need for property rights in China. The justification being that ownership is separate from management and good or successful companies now have different owners and managers. But this is a false argument as it does not realize that even in the example given (i.e. about well-run successful companies), the ownership is completely clear and well defined. Hence the benefits to owners too are well defined.

• The current Prime Minister Le Keqiang is an economist and has taken a six-fronted approach to economics:
* No stimulus (later modified to micro stimulus)
* No bail out, Structural reforms
* Opening up, Development economics
* (…sixth approach??)

• But, there are several challenges and dark clouds on the horizon/in the Chinese sky. The biggest being corruption which is at massive levels, blatant and especially at the top levels. The reason being that the Chinese economy is heavily state-regulated, with scope for huge rent-seeking by bureaucrats.

• On a different note: to get a better picture of the role of government in the market, we should look not only at the govt. income as a fraction of GDP (i.e. tax/GDP ratio) but the govt. spending to the GDP. Typically, the tax –GDP ratio would be much smaller than the spending-GDP ratio (because the latter would include the social-security, etc.).

• Given the background and experience of this audience, there is not much to talk about the need for property rights. The real issue is how to achieve them. It is less about ideas and ideals and more about implementation.

• Example/Case Study from India: in relation to the forest property rights issue the ‘Right to Forest Produce’ legislation was passed in 2006, the state authorities did not have the resources or the incentives to make this paper right into a reality. Hence there was poor implementation. Liberty Institute intervened at the field level and leveraged technology available (esp. GPS), with the land data being collected by the citizens themselves.

• Liberty Institute trained the citizens to use the hand-held GPS instruments and mark the property boundaries subject to a no-objection from their property neighbours. Then they made a formal application with the governmental authorities for recognition of this property right. Then LI issues a letter to the land authority as to why the application shall be accepted or not rejected. Usually the state authorities accept such applications resulting in land titles.

• Freedom has different dimensions and aspects.

• Thailand is relatively a freer economy than many comparable countries, but after the latest military coup, its political freedoms have faced curbs. The Thai economic growth & its democracy had increased incomes for large sections of its society. This caused the growth of the middle class, which in turn, has catalyzed greater demand for political freedoms. However after the latest coup, regression is seen in these freedoms.

• The real solution to protect and promote freedoms is therefore to have sound institutions. In such an institutional framework, the rules and regulations, agencies and bureaucracies should function not to serve special/narrow interest groups but the universal principles of freedom and liberty.

• Politics usually is the fountainhead of every other freedom; everything else follows politics, governments and governance. Economic freedoms follow political freedoms. Most of the demands and movements are less about narrow economic rights and more about broader political rights and freedoms.

• Some key challenges in the area of property rights are:

* Civil Forfeiture in the USA (& Canada?)- law enforcement agencies could directly seize private property and use it directly (e.g. guns seized by police at a home could be used or sold by the police. There is no need to charge the owner with a crime. So, even without filing a charge sheet, property could be seized and confiscated by the authorities and used while the affected owner has to fight it out in courts for several years. Barun interjected with the comment that this seems to be even worse than eminent domain concept in British common law countries.

* Law enforcement authorities can charge not only people but also ‘things’ or ‘objects’ with offences. (presumably used/to be used : “People vs. 5200 dollars” case)

• Razeen Sally: on HK’s land market & the land cartel problem.
Mr. Work answered: the state owns all the land in HK just as in China (except a small parcel of land owned by the Anglican Church). Therefore, you cannot buy a property but only lease the land (typically, for 99 years as in most contracts). Occasionally, the government auctions land (for lease?) but we don’t see lots of potential buyers coming from across the world because of the post-sale transaction regulatory requirements (resulting in attendant costs; eg: post purchase development fees, mandatory greening regulations, etc.) are often tortuous, opaque and therefore their costs are not fully and accurately known to the buyer at the time of purchase. Hence the final cost would become severely inflated due to these costs.

• HK downtown demonstrations are closely related to the above issue also: HK is currently governed by a mini-Constitution (‘basic law’) negotiated by the Chinese and British governments at the time of transfer from the latter to the former. This is valid for a period of 50 years i.e. from July 2, 1997 to July 1, 2047; what happens after that is unclear: would HK be fully absorbed into the Chinese system? Meaning would Chinese concept of eminent domain and state dominance come into HK? Would all the land leases evaporate or be preserved after this date also? Or would China itself become more democratic and liberal by then? The mini-Constitution/Basic Law essentially preserves the status quo of private property ownership for the present. But nobody knows what would happen when this situation ends. Hence the fear of HK people and property owners about their property rights.

• [General discussion of Mr. Work with Karthik following the session: It seems that we could view the HK protests as having mobilized diverse sections of the HK society who are driven by multiple, group-centric but overlapping concerns:

Property owners/elites Concerns: the uncertainty/confusion over the property rights following expiry of mini-Constitution on July 2, 2047. They understand that unless they get the next system locked in right now (at least before the next elections to the Chief Executive due in 2017), they cannot be guaranteed anything.

Specific professional groups also are supporting these protests: Lawyers (who got upset over the ‘White Paper’ from mainland China that issued a directive to HK judges to support the state rather than the law) and the Media/Journalists who are upset over the reduced political freedoms, etc.

Barun Mitra: Property rights (esp. physical property rights) are at the root of other forms of rights. The Gini Coefficient to measure economic inequality, even though started by liberals and with a good intent, is doing a disservice because it focuses on economic outcomes and not economic opportunities.

Dr. Feng: supported Barun’s points and emphasized Hayek’s book (The Road to Serfdom) which says that economic freedom and rights are at the basis of every other civil rights and freedoms.

Dr. Thitinan Pongsudhirak: The concept of property rights transcends national boundaries; it is not regional or national.
-----------