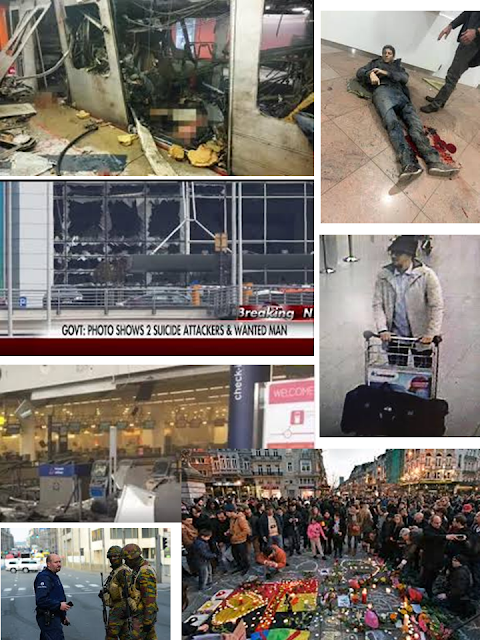 One problem I think is that nations, rich and poor, are still focused on those large-scale, country to country wars so they accumulate have huge tanks, jet fighters, warships, submarines, etc. New wars and terrorism are micro, house to house or buildings to buildings. Better weapons to secure are micro too -- CCTVs, drones, cyber intelligence, spies.

Flashpoints like the South China Sea or West Philippine Sea, Israel-Palestine conflict, are nice for selling huge, multi-billion dollars armaments and battleships, jet fighters. But those flash points don't kill people like you and me. It's terrorist attacks, them who blow up buses and cars, coffee shops and airports, that can kill you and me. And the criminals will do it not a decade or two from now, but within months or few years, depending on the "causes" of those terrorists.

Some good points made by a friend, Jemy Gatdula in his article in BWorld, War is what we make of it, March 04, 2016,

"At this stage of our country’s development we can’t fight a war hoping to beat the other country. This includes not making our defense strategy hinge on the assistance of allies. We shouldn’t waste spending and the developing of our plans on such thinking.

What we can do is build our national defense strategy around the idea of attrition and guerilla warfare: to make going to war against the Philippines an island per island matter, complicated, never-ending, so costly in terms of human and material resources that it would practically outweigh any benefit -- that any country would have to think twice if it’s worth attacking us at all."

Our Philippine National Police (PNP) cannot and do not catch too many thieves who can victimize us, our family members and friends, our office staff, our car or house, etc. Internal crimes and internal terrorism are much more dangerous, more fatal, than those "national wars" on territories. Paris and Brussels bombings are clear proof of that.

Terrorists have one clear goal: terrorize the people, both locals and foreigners, and inspire other militants. Tourists and investors should avoid Paris and Brussels, other big cities, hope for econ. slowdown as punishment for their governments for some "wrongdoing" somewhere.

That is why internal security should be efficient. Government failure here means govt failure in many other functions. In the Philippines, peace and order has been largely privatized a long time ago. Private security guards secure schools and universities, buildings and condos, shops and malls, airports and seaports, clinics and hospitals. The police are often busy catching motorcycle drivers with no helmets, motorists who make left turns or U-turns in non-U turn corners, or giving road assistance to VIPs, public and private.

Soon, Belgium, France, other European countries will be peppered with lots of private security guards as the govt cannot secure internal security, too busy with welfarism and buying heavy armaments for "national wars".

Meanwhile, am waiting for this headline somewhere, "Climate change causes more suicide bombings like those in Brussels", heh heh.
Posted by Bienvenido Oplas Jr at 2:29 PM