There are many solar companies in the Philippines now. Pasting some of these as reported in interaksyon.com, reports from late 2014 to early 2016 only. Many of these companies were set up or started serious solar construction only when the handsome feed in tariff (FIT) rates were announced by the DOE. 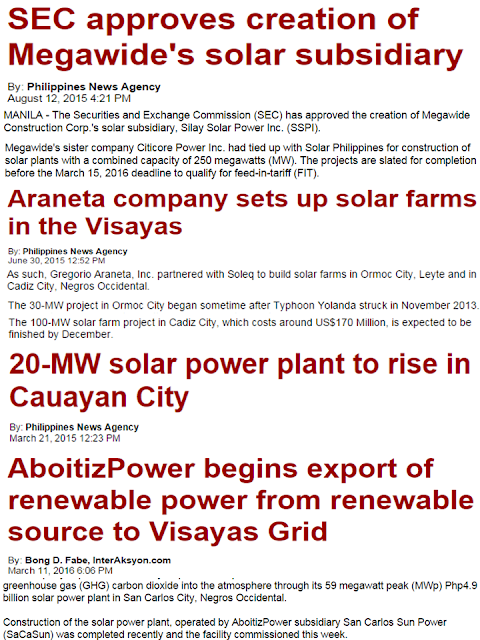 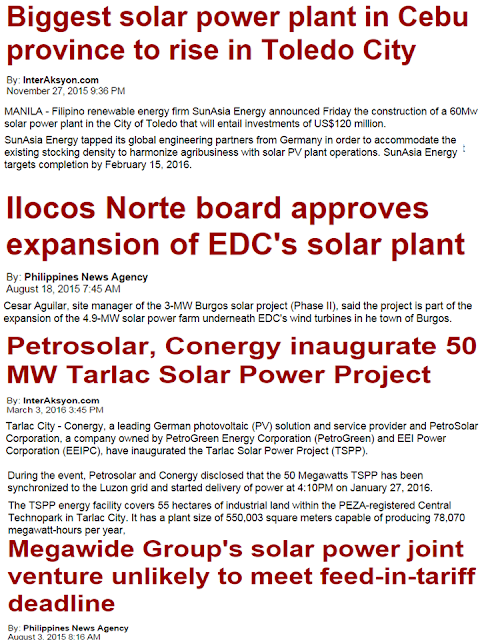 AC Energy continues to expand its renewable energy portfolio. It recently entered into a partnership agreement with Bronzeoak Clean Energy Inc. for the development, construction and operation of a P1.3-billion solar power farm in Bais City, Negros Oriental with a capacity of approximately 18 megawatts in the first phase, and targeted completion in March 2016. The second phase involves the expansion to 50 megawatts.

First Gen, Ayalas, Aboitiz, other big energy firms, you are big and rich companies or conglomerates already, you may wish to beg off from collecting your FIT rates entitlement and payment someday, sooner than the 20 years FIT entitlement.

A clear chart from The Economist, October 12, 2013 report, How to lose half a trillion euros. 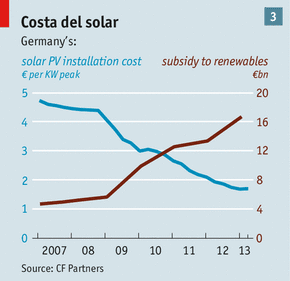 The installation cost keeps going down but actual cost of subsidies, to be paid  by all energy consumers, the public keeps going up. How come? Because of  FIT and related subsidies. And this means rising electricity bills for households.

Meanwhile, there was a news report in 2014 which resurfaced in facebook a few days ago. PagIBIG says "borrow more  (housing, start up business, and now solar) from us. 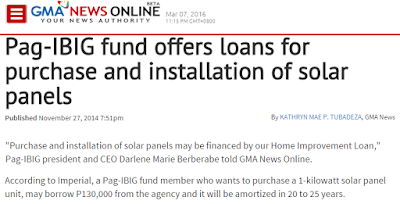 Loan up to P130,000 per 1kW power? Wow. Include the interest payment and the cost further goes up while the efficiency declines through time.

Then a news about the DBP loan for net metering. The government corporations are joining the  "save the  planet" movement via more expensive electricity.

A friend commented that despite the expensive set up  of retail  solar, "more than anything else, this is more about dealing with a power monopoly by giving us a real alternative power that allows us to unplug off the grid and create our own electricity. that's power to the people!"

The retail competition and open access (RCOA) provision of EPIRA is breaking the monopolies by Meralco and about 120 other distribution utilities (DUs) and electric cooperatives (ECs). If you have a 1,000 kW or 1 MW mini hydro power plant, say in Montalban, you can supply direct to one small subdivision, or a small mall. You break out of the DUs and ECs' monopoly, also the NGCP's transmission monopoly. You just have to pay a wheeling charge for the use of the DU's electrical network down to household level.

RCOA will soon move lower to 0.75 MW. Can you believe that, if you have a 750 kW biomass plant, or carpark solar, or perhaps 2 wind turbines, etc., you can do commercial sale of electricity, small scale of course. But the bottomline is that you are contributing to de-monopolization of the power generation sector. It's called the "contestable market", those that can join the RCOA. The ordinary houses, offices or buildings that are not linked to the RCOA system are called "captive market" by the DUs.


Demonopolization of the power sector is already in the law as early as 2001, but implementation was delayed.

Meanwhile, I saw this today from Solar PH's website.

Posted by Bienvenido Oplas Jr at 12:32 AM

Sir, I think you failed to notice cdrking.com and its division solarquestph.com. IMO, they are the ones who really introduced “retail solar power” and made solar power a consumer item in the Philippines. If were not for the availability of solar products in their provincial branches, the price of even a small solar setup will not be affordable. Now, you can easily DIY a small off-grid setup or buy a "plug and play" solar generator for as low as Php 3,000.00. For this, I personally thank cdr king for providing me the tools and materials that enable me to DIY my own electricity at an affordable cost.

Hi, thanks for the comment. So it is only P3,000 now. Another reader commented to my article 2 weeks ago about "Sen. Loren Legarda and renewables", more than 2 years ago it was P4,900. Copy-pasting the comment:

Anonymous said...
"My first experience with "retail" solar power was after typhoon Yolanda in the form of a portable solar power kit bought from Cdr King to provide us with light during the very dark nights. The power kit is "plug and play" consisting of two 3 watts LED 12V DC bulbs and a USB terminal that could charge a cellphone. The 12AH built-in battery is being charged during day time by a 20 watts solar panel. That was more than two years ago and now and the said solar power kit (now with a new battery) is still providing us with light during brownouts. The cost of the said power kit is less than Php 4,900.00 and yes, it is made in China!

The two 3 watts LED bulbs was used for 10 hours every night, so 6 watts x 10 hrs = 60 watt-hour / 1000 = 0.06 kilowatt-hr x 10pesos = 0.60 centavos. Therefore, our local electric company was losing sixty centavos every night because am not using their electricity (or they have no electricity).

What is my point? The solar power kit is just providing me with sixty centavos worth of electricity every night but I prepaid Php 4,900.00 for it. Imagine if 1 million persons bought it. That would be 4.9 billion pesos business, just for a portable solar power kit. I think, "retail" solar power business is a new business opportunity that China and Leandro Legarda Leviste sees first. Therefore, like you, the good senator is not interested in winning the debate; because she has other business interests to think about."

It feels silly to commercialise something that's supposed to be a sustainable solution. People should be encouraged to use methods like these instead of fuel the finances of conglomerate businesses.