BWorld 47, Renewable energy and the illusion of merit order effect

When government intervenes in the pricing of a particular product or service supposedly to protect the consumers from “unwarranted” price hikes, or to pursue some social or environmental goals, the action tends to create more problems than what it intends to solve.

Take the case of government price control of electricity via (a) fixed and guaranteed pricing through feed in tariff (FIT) for solar, wind, biomass, and run of river (ROR) hydro for 20 years, (b) priority or mandatory dispatch of renewables even if cheaper energy is available, and (c) price caps at the Wholesale Electricity Spot Market (WESM).

These three forms of price control are wrong on the following grounds.

1. Technologies on anything keep evolving and changing for the better, and prices of each product model go down through time. So why guarantee and fix the price of solar, wind, biomass, ROR hydro for the next 20 years? Their respective technologies should be capable of bringing down the cost and attain “grid parity” with the conventional sources, as the proponents and developers of new renewables often argue. 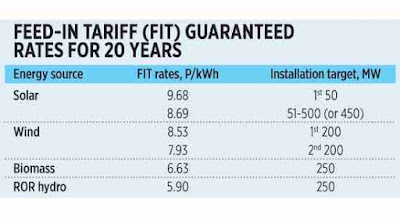 2. People want cheap electricity, so when cheap and stable energy sources are available from conventional sources, they should be allowed to come in. But under the “priority dispatch” and “must dispatch” policy under the RE law, the national grid, the distribution utilities, and the electricity consumers are forced to buy the more expensive renewables whenever these are available. In this case, the consumers’ chance to have cheaper electricity is beaten by the political need to subsidize the renewables, for 20 years.

3. People want stable electricity, one that runs 24/7 and not fluctuating per hour or per minute. To make this happen, there should be 100% redundancy in the grid. Suppose that there is a province with daily need of 150 MW on average. RE developers come in and put up a 250 to 300 MW combined power from solar and wind. There should be at least 200 MW of coal or natural gas or big hydro or geothermal power plant nearby, to provide electricity at night and the wind does not blow because the 250-300 MW from solar-wind can become zero, nada.

Power redundancy means expensive electricity -- such as those generated by wind and solar -- are forcibly fed into the grid when they are available. Otherwise, the conventionals come in but they must price their output higher to compensate for hours that they were not running. The higher price on those hours that they run will allow them to stay in business. If not, they will go out of business and close shop, and the people will suffer massive brownouts for many hours, daily.

Here is the average capacity factor or the percentage actually running and producing electricity of wind, solar and biomass, six months of 2015.

In May and June, very low output of only 1% was reported for biomass and 6.5% for wind. Biomass peaks in August and September while wind is inconsistent in monthly output, giving 20% when the wind blows strong. Solar has an average capacity factor of 19%. Zero output for 11-12 hours at night, then average of 40% at day time. 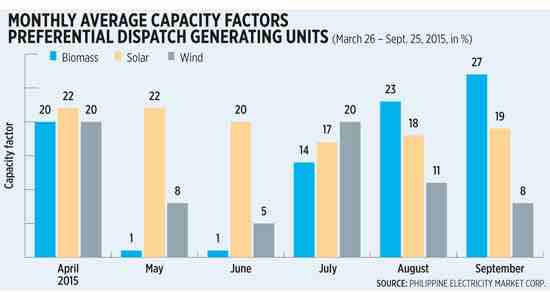 4. The “merit order effect” (MEO) of renewables at WESM is a bloated interpretation of its supposed downward effect on spot electricity pricing. Merit order is the ordering of power sources into the grid from lowest to highest offer price at WESM. Thus, the cheaper base load plants with extra power will come in first (big hydro, geothermal, coal, natural gas) then the peaking plants that run on diesel. Peaking plants are meant to run on peak hours of electricity demand only, say 2-4 hours a day.

The supposed MEO is the result when must-dispatch renewables are inserted into the merit order, then they marginalize and displace the more expensive diesel plants priced at P8/kWh or more. This changes the market clearing price (MCP) from P8/kWh or more to the spot price of baseload plants like natural gas, say at P4-P5/kWh. As a result, customers enjoy savings as reflected in the lower WESM price in their monthly bills.

Based on computations and estimates of the Philippine Electricity Market Corporation (PEMC), while the FIT incurs an additional cost of P4.2B to customers, the MEO results in savings of P8.3 billion. The net effect is P4.1B savings to customers, that translates into P0.0567 (or 5.67 centavos) per kWh per customer.

However, there are oversights in the computation’s assumptions. Consider the following:

c. There will NOT be an MEO if there is sufficient supply of power from cheaper energy sources, both in long-term bilateral and short-term spot price contracts.

FIT is collected nationwide including customers in Mindanao that are not even connected to the Visayas and Luzon grid. The purported savings from MEO are supposed to benefit Meralco customers but people in Mindanao, tens of millions of them, are not Meralco customers and yet they contribute to paying expensive electricity via FIT payment.

The PEMC, which operates WESM, made the study that justifies the role of renewables, which, in turn, is the priority of the DoE, the agency that heads and controls PEMC. And that makes the PEMC study self-serving.

The National Renewable Energy Board (NREB), the multi-stakeholder advisory body seems to be playing along with PEMC in justifying expensive electricity from mandatory renewables.

Now here come the big questions that I myself do not know the exact answers.

1. If Mindanao customers were spared of paying FIT as they are not connected to the Visayas and Luzon grids yet, what could have been the FIT rate since 2015? Definitely higher than the P0.0406/kWh collected.

2. With more FIT-eligible renewables fed into the grid since last year, the cost of FIT allowance will rise this year, by how much? I heard low estimates of P0.10/kWh to medium figures of P0.17, up to P0.25/kWh.

Since there will be a elections this coming May, then there will be no FIT hike, DoE will control it. And the next administration will also postpone the FIT hike as it does not want to be known as having imposed an instant and immediate electricity price hike upon its assumption in power. Postponement of FIT collection to a later date means the FIT rates will have to be higher than if it was collected last January or February 2016. Woe unto the developers of FIT-dependent renewables. The delayed payment they experienced in 2015 will worsen this year.

3. With prolonged postponement of FIT hike implementation, say by August or September 2016, what would be that FIT rate then?

Bienvenido S. Oplas, Jr. is the head of Minimal Government Thinkers and a Fellow of the Stratbase-Albert del Rosario Institute (ADRi), and the South East Asia Network for Development (SEANET). minimalgovernment@gmail.com
-------------