Another Earth Hour drama the other day. The WWF guys, their buddies, should do it nightly, 365 nights a year, and several hours a night if possible. Better yet, they should have an office in North Korea where EH is a nightly reality for many of its neighbors.

A good satellite photo of Europe and Africa, same time zones. Darkness is cool? Am laughing. 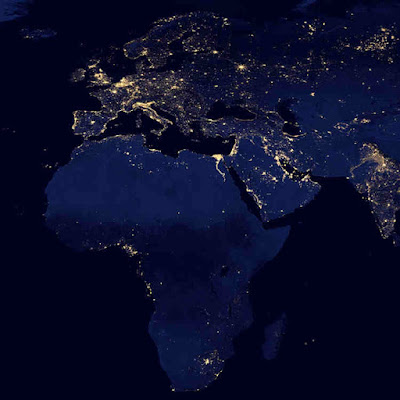 I am reposting a nice intro to basic electrical  engineering, from my engineer-economist friend, Cynthia Hernandez. Cynthia gave me permission to repost this. Thanks Cynths.
-----------


Scene in the house last night:
Mother: (looks at clock) Naku! 8:30 na! We have to turn off the lights for Earth Hour.
Me: (launches into my Earth Hour rant*)
End result: Lights and aircon stay ON! Woohoo!

*Earth Hour rant (slightly) condensed: Electricity is not just the Demand side. You turn off the lights, your meter runs slightly less, and you think, "Hurrah, I saved ×× kWh less, yey me, I'm such an Earth Warrior!" Then you pat yourself on the back and not think about the environment for the rest of the year.

However, on the Supply side, the huge generators that have to run to feed the Nation's addiction to OTWOL (or whatever is the current obsession. I don't watch TV so maybe that gives me environmentalist points?) don't stop spinning. Why? If you're running your car at 100 kph, you don't brake to 0 kph in 1 second, right? And these generators are engines that are a million times larger and more complex.

So, when everybody turns off their lights, generators don't spontaneously use less fossil fuel. They are not designed like that. Especially if demand is expected to pick up again after an hour. Most likely scenario is that they are still running in reserve mode and burning fossil fuels as they do so.

If you really want to make an impact, don't use electricity for an ENTIRE DAY. That means not subjecting the electric grid to the stress of an hourlong demand drop. The system operators, that have to take extraordinary measures so that your appliances don't get fried by a massive voltage surge, will thank you. That is, if you can stand to be without electricity in this heat. Good luck with that.

Meanwhile, this quote is from Bjorn Lomborg, he tweeted it. Cool. 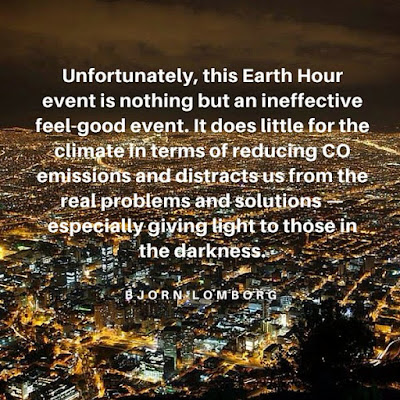 Global ecological socialism -- the main goal of climate alarmism and the "man-made" or anthropogenic warming/climate change -- is deceptive and lousy, they wish to see more, bigger governments. The WWF, Greenpeace, the United Nations, other big international campaigners are simply saying, "save the planet... (send more money to us)."
------------