Forbes released the world's top billionaires, and 11 of them are Filipinos. Reported in BusinessWorld yesterday:

1. Henry Sy -- the lone Filipino to crash Forbes’ top 100 richest -- placed 71st in the global rankings, up from 73rd last year, but his net worth dropped to $12.9 billion from $14.2 billion. His SM group owns SM Prime Holdings, Inc., BDO Unibank, Inc. and SM Retail, Inc., all dominant players in their respective industries.

3. Lucio C. Tan of LT Group, Inc. slipped to 380th from 369th, but he surpassed two others who placed ahead of him last year. His net worth declined to $4 billion from $4.4 billion. He has interests in PMFTC, Inc.; Asia Brewery, Inc.; Tanduay Distillers, Inc.; Philippine National Bank, Eton Properties Philippines, Inc. And PAL.

4. George S.K. Ty of GT Capital Holdings, Inc. slid to 421st from 369th, as his net worth fell to $3.7 billion from $4.4 billion. His businesses span the power, banking, property and automotive sectors.

Mr. Consunji saw has family’s net worth drop to $3 billion this year from $4.1 billion in 2015. DMCI has interests in power generation, mining, water distribution and real estate.

Mr. Tan Caktiong was the only Filipino billionaire who saw an increase in fortune to $3 billion from $2.7 billion in 2015. Dubbed by Forbes as the “fastest-growing Asian restaurant chain in the world,” Jollibee Foods forayed into the mainstream burger market with the purchase of a 40% stake in American food chain Smashburger in October last year. 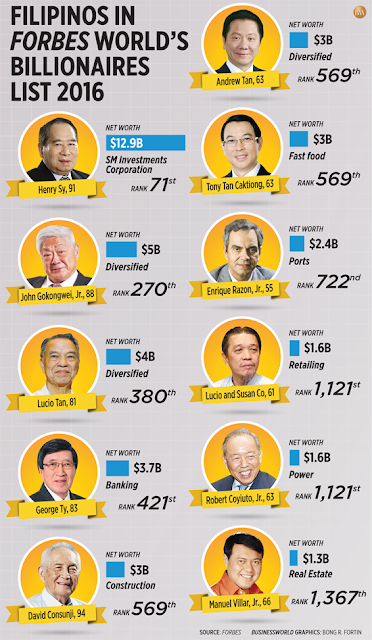 Other Filipinos in the world’s billionaires circle were:

Also, 27-year-old Filipino-American Bobby Murphy, co-founder of photo and video messaging app Snapchat, was the sixth youngest billionaire with a $1.8-billion net worth.
-----------

I anticipate the complaints and  whining of the left-leaning groups and individuals, that Mr. Sy and family can accumulate almost $13 billion which is 5% of GDP, from one family alone. Of course, the result is bad because their math is bad. Mr. Sy and family accumulated  that amount after 30 or 40+ years of hard work, savings, investments and re-investments, while the denominator, GDP, is the figure for only one year.

Not that I'm a fan of any or all of these 11 super-rich people and families in the Philippines, but I think this country will be worse off if any or all of them did not exist and did not invest big time in the PH. What makes an economy become dynamic and prosper is through the effort and risk-taking by the private entrepreneurs, not government over-taxation and business bureaucratism. Now if government will shift its attention by over-regulating and over-bureaucratizing the real criminals in the country -- those thieves, carnappers, land grabbers, murderers, rapists, plunderers, etc. -- it will significantly make the small and medium entrepreneurs move forward fast.

Posted by Bienvenido Oplas Jr at 11:05 AM

On the other hand, Mr. Sy has accumulated much of his wealth due to the Philippines shutting out foreign competition. You have no WalMarts, like China. You have no Costcos or Ikeas, like Taiwan. And you have no access to business' like Amazon, due to your poor postal system.

At least Jollibee thrives in the midst of competition. Competition from the best of what the world has to offer. Too bad my local Smashburger still isn't offering the fried chicken/sweet spaghetti combo. :-)

Right Todd. The same can be said of the telecom, we have no AT&T, Orange, Deutch telekom, etc., only Smart and Globe local duopoly. And for different professions, no US or UK or Canadian law offices or engineering offices, only Filipinos. Nonetheless, the PH would be in a worse off situation if there was no Henry Sy with a different foresight since the 70s or earlier. He put up an SM mall in Binondo when almost everyone was investing in tiangge-tiangge there.