The following are minutes and proceedings during the Economic Freedom Network (EFN) Asia Conference 2014, Hong Kong, on the theme, “Liberalism: Promoting Growth, Reducing Inequality”, November 2014. Major sponsors were the Friedrich Naumann Foundation for Freedom (FNF), a liberal political foundation based in Germany, and the Lion Rock Institute (LRI), a free market think tank in Hong  Kong. 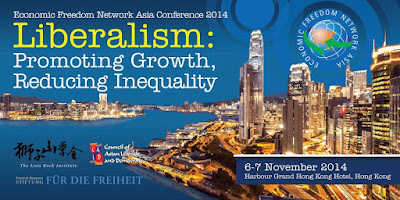 These notes were made by Karthik Chandra of the Foundation for Democratic Reforms, INDIA. The 25-pages notes are posted in
http://efnasia.org/wp-content/uploads/2015/10/EFN-Asia-2014-Conference-Report.pdf

I am reposting them by major segments and  installments, plus my brief personal notes on each segment. Here’s the 1st installment.
-----------

• Welcome to Hong Kong! Given the recent developments (citizens’ demands and mobilization) in Hong Kong (HK) serving as the backdrop, this certainly is a good and clearly an interesting time for all the participants to assemble in Hong Kong, especially to discuss about inequality, liberty and freedom.

• There is an image of HK in some quarters of the media that capitalism here is of the crony variety and that there is no true economic freedom or liberty for its citizens. But the reality is that for a city of 7 million population, there is a lot of economic freedom and enterprise.

• At the heart of the current political developments seems to be a vigorous debate about two freedoms – economic and political. But, there is no conflict between the two. Those institutions that ensure economic freedoms in the form of greater equality, growth, prosperity and overall economic freedom also underpin the political freedoms. A few such institutions are free flow of information and rule of law.

• ‘Liberalism’ as understood in the traditional sense should not be viewed as an end in itself. There is a difference between treating people equally and keeping/ensuring that they remain equal.

• Welcome to Hong Kong EFN Conference. EFN Asia Conference has become a long established tradition, this event being the sixteenth one; this is my first one as a Regional Director. Thanks to the LRI and the Frasier Institute for being our partners. LRI is also celebrating its 10th anniversary; congratulations to them.

• Events such as the EFN 2014 greatly help institutionalize the ideas, research, debates and international experiences help them become a part of the political and academic discourse on economic freedoms.

• This event is being held in the background of the furious debate over political and economic freedoms of HK vis-a-vis China. HK has long served as the global leader of economic freedom. Now, the debate is about its political freedoms; about ensuring the rule of law and independence from political interference in HK.

• Currently, there is also a great debate on economic inequality. The idea of ‘economic equality’ retains a lot of appeal despite the fact that communism and socialism have repeatedly failed to ensure the same, based on our experiences in several countries.

• At the same time, this debate also touches upon the issue of social mobility and how crony capitalists and well-connected gamers have managed to subvert economic institutions and thereby gain undue benefits.

• This conference therefore is a valuable contribution towards helping settle the above debate because it provides a platform for sharing of knowledge and bringing new ideas into an area that has been traditionally dominated by left-leaning thinkers or misguided activists.
----------

Me: Right, the (classical) liberal definition of equality is equality before the law, equal  application of the law to unequal people, equality in access to opportunities with no exception or people giving exemptions. And inequality of outcome, of income and assets ownership, is the natural result because people have different attitudes in life.
-----------