ALF 7, Panel on TPP, RCEP and other RTAs

I am reposting this article from the EFN Asia website, written by a friend, Sethaput. One of those pro-free trade but anti-TPP papers.

As a free marketer like Sethaput, for me, the best action is unilateral, one-way trade liberalization. Just give the consumers and producers more choices, more options, more freedom where and whom to buy or sell. This is unpalatable to many sectors of course, similar to advocating significantly shrinking governments and foreign aid institutions, so its chance of being adopted is very small.

So the second-best solution is multilateral, worldwide liberalization. But this is not happening too, look what's happening at the WTO negotiations, 21 years after it was created in 1995. So the third-best solution is regional liberalization via regional trade agreements (RTAs) like the ASEAN FTA (AFTA), ASEAN Economic Community (AEC), Regional Comprehensive Economic Partnership (RCEP), and the Trans Pacific Partnership (TPP).

The no-no option or solution is protectionism, via high tariff or various non-tariff barriers (NTBs) and restrictions.

Photo below, during the panel discussion at the ALF, 19 February 2016.
From left: Julian Morris of Reason Foundation (US) as session chair/moderator, Sethaput (Thailand), Vivek Dehejia, IDFC Institute (India) and Razeen Sally, IDEAS Chair in Political Economy and Prof. at the National University of Singapore (he's Sri Lankan). 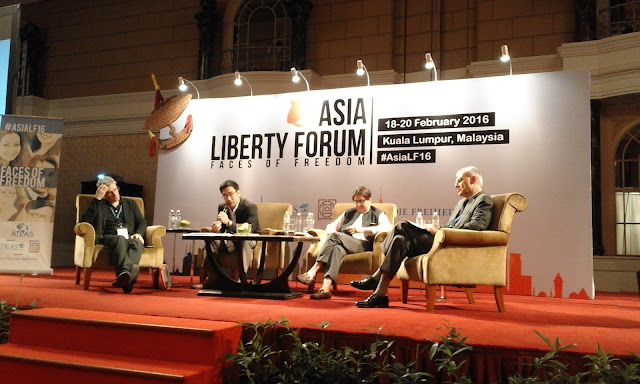 TPP, RCEP, FTAAP …ARE THEY REALLY GOOD FOR DEVELOPINGCOUNTRIES?

(Remarks delivered at Asia Liberty Forum (ALF), 18-20 February 2016, Kuala Lumpur. Remarks represent the views of the author and not necessarily those of the Foundation; sethaput@thailandff.org.)

Let me start with a few general observations on whether regional trading agreements (RTAs) are good for developing countries, before moving specifically to the Trans Pacific Partnership (TPP).

Second, recent RTAs like the Trans Pacific Partnership (TPP) are not just (or mainly) about trade, but about a whole lot of other things, many of which are not in the interests of developing countries.  As Jeff Sachs has noted, the TPP is really 4 deals in 1, encompassing a preferential trading agreement; regulatory standards for trade; labor and environmental standards; and regulations covering investor protection, intellectual property (including the expansion of copyright and patent coverage), and service sectors.  As such, the bulk of the 30 or so chapters of the TPP agreement are not really about trade.  With the TPP, we seem to have gone from trade agreements with some standards and other non-trade related baggage thrown in, to an agreement on standards and regulations with some trade thrown in.  As noted by many economists, much of this shift has probably been driven by US corporate interests: “The TPP and TTIP seem to be about corporate capture, not liberalism[1]” (Rodrik, 2015); “[TPP] is largely about Hollywood and pharma rather than conventional exporters[2]” (Krugman, 2015).

Third, by design, developing countries typically have much less bargaining power under RTAs than multilateral agreements.  The TPP is no exception.  As Jagdish Bhagwati has noted, the US managed to obtain better terms by sequentially bargaining with smaller countries first before essentially offering a “take it or leave it” deal with larger countries such as Japan.  The asymmetry in bargaining power is reflected in the very language of the agreements.  In the side agreement on labor standards between the US and Malaysia under the TPP, for example, the words “Malaysia shall” appeared 34 times while the words the “US shall” appeared zero times.  Perhaps in the spirit of partnership, the words “Malaysia and the US shall” did manage to appear together once, in the context of securing funding for some technical assistance.

More worrisome, the lack of bargaining power extends to dispute settlement.  Under the multilateral system, developing countries have recourse to the WTO dispute settlement mechanism.  By contrast, under the TPP, the Investor-State Dispute Settlement System (ISDS) provides international arbitration to “ensure that Americans doing business abroad receive the same kind of protections…that are available to companies and investors doing business in the US under US law.”  The US Trade Representative (USTR) helpfully goes on to note on its website that “the US has never lost an ISDS case.  We have had only 13 cases brought to conclusion against us and the US has prevailed in every case.”  Not surprisingly, the lack of favorable outcomes has deterred others, with only one new case brought against the US in the last five years.

Fourth, nevertheless, individual developing countries can and do gain from RTAs.  Estimates by both the World Bank and the Institute of International Economics (IIE) using computable general equilibrium (CGE) trade models of the net benefits to Vietnam and Malaysia from joining the TPP are on the order of around 8+% of GDP cumulatively through 2030, though these estimates are likely to be on the high side for reasons discussed further below.  At the same time, other countries in the region, notably Korea and Thailand, lose out from not being in the TPP.

Let me now turn to the next part of my remarks and try to answer the following question:  In light of the above observations, what position should an old-fashioned, liberal economist from a developing country in Asia take in good conscience towards the TPP?

This is not such an easy call.  Do we tap into our collective or national conscience?  The TPP undermines the multilateral approach and thereby yields an inferior collective outcome for developing countries.  But despite very uneven bargaining power, it can generate benefits for the individual developing countries who decide to join the club.  Do we give greater weight to politics or principles?  Trade agreements have an unfortunate tendency to bring out a wide variety of NGOs and special interest groups in protest, for protectionist or other reasons.  Bedfellows matter.  If we take a position against the TPP, do we want to be seen to be allied with such protectionist interests?  Alternatively, do we want to be seen supporting a RTA like the TPP which has such illiberal parentage and baggage?  The TPP extends copyright and intellectual property (IP) protection far beyond the WTO TRIPS guidelines.  The TPP also seeks to impose higher environmental and labor standards on trading partners in an attempt to promote what it sees as “fair trade.”  But what does it really mean for trade to be “fair”?  The USTR provides some insight into its thinking on this question on its website: “When the rules are fair, Americans can out-compete anyone in the world.”  A corollary must be that if Americans can’t compete, then trade by definition isn’t fair!

On balance, this old-fashioned liberal economist from Asia would tend to say “no” to the TPP, for reasons of both principle and pragmatism.  Why?

First, principles and precedents matter.  We should not abandon the principle that RTAs should be first and foremost about trade and establish a precedent whereby RTAs are commonly and excessively loaded with all manner of other non-trade related baggage.  As Jagdish Bhagwati has written in the context of India and the TPP:

“We are open to trade liberalisation in PTAs but we will not sign on to all the non-trade features built by US lobbies into the TPP under the pretence that these are the marks of a ‘modern’ trade agreement.  Thus, if we want to join a golf club, we must know how to play golf; but we cannot be expected to go to Church and sing madrigals with the other members! – Jagdish Bhagwati[3]

The TPP risks undermining other principles as well.  In a “governance-challenged” region such as Asia, probably the single most important principle to uphold is the rule of law.  However, the TPP provides a means for US corporations and investors to circumvent the rule of law by resorting to arbitration under the ISDS mechanism.  What kind of signal does this send regarding equal treatment under the law?  Excessive corporate recourse to arbitration has already started to raise such concerns even in domestic court cases in the US.  Think of how easy it would be to fan the flames of protectionism here in Asia by claiming that these trade agreements provide one law for locals but another for foreigners.

Second, from a purely pragmatic standpoint, the economic gains and losses from TPP for individual countries are not all that large and are probably less than commonly supposed.  Let’s start with the losses.  Thailand has the unfortunate distinction of being the country that is usually estimated to lose out the most from TPP, but even here the losses are not huge: only around 0.9% of GDP cumulatively through 2030, or a CAGR of less than 6 basis points.  If I were to compromise my liberal economic principles, I would want to do it for more than just 6 basis points.  What about the gains?  The devil is in the details as each country’s circumstances are different, but chances are that the gains to a Thailand or Indonesia would be less than those to Malaysia and Vietnam just because new entrants to the TPP would have to negotiate with all the other signatories.

Of course, for many signatories, geopolitical and other non-economic considerations are likely to be an equally important part of the TPP calculus.  But there are several reasons for believing that the estimated gains to signatories might be less than commonly supposed.  First, not surprisingly, the estimated gains focus solely on the stuff that can be quantified, basically trade and investment flows.  The models and estimates pretty much ignore the much more difficult to quantify effects of the TPP such as the higher labor and environmental standards, much tighter IP protection, and ISDS.  But just because these effects are difficult to quantify doesn’t mean that they have zero cost to developing countries.  Second, the models rely on historical time series data for their calibration, data which may not reflect future prospects.  The World Bank model, for example, relies on data up to 2011.  But trade growth prior to 2011 was much higher than it is today or it is likely to be going forward for some time.  Less trade means less gains from trade which probably means less benefits from TPP.[4]

This brings me to my last point.  Mega-RTAs like TPP, TTIP or RCEP undermine the multilateral trading system.  A dangerous, self-fulfilling dynamic is created.  We decide to participate in RTAs because we can’t conclude Doha and we can’t conclude Doha because we decide to participate in RTAs.  Big trade deals get a large amount of policy and public attention and eat up a lot of political capital.  Do we really want to use what scarce political capital we have for an illiberal trade deal like the TPP?  Even if we were to believe that the multilateral route is dead and that RTAs are the only game in town, we should make sure that we choose the best game for us.  Why not try instead to work on RCEP to make it the best of all possible RTAs, one loaded with much less non-trade baggage and one which makes best use of the best principles and elements of the multilateral system?
----------

[3] Jagdish Bhagwati, “India should not toe the US line on the Trans-Pacific Partnership,” Hindustan Times, 28 Sep 2015

[4] A third and more subtle reason has to do with the specification of the baseline or counterfactual scenario.  As is typical, most of the modeling effort and attention is focused on analyzing the policy scenario at hand, i.e., TPP.  But the baseline is equally important in determining the size of the estimated gains since the gains are just calculated as the difference between the TPP and baseline scenarios.  But what if the right baseline scenario to use is a world where multilateral liberalization is more successful?  Or if RCEP is quickly implemented?  The corresponding gains from TPP would probably be reduced.
------------