BWorld 44, Why the Philippines should join the TPP

Free trade is good and beautiful and the best example of it at the micro level is the tiangge-tiangge or market-market that one finds in Divisoria, Baclaran, Quiapo, and other low- to mid-end commercial centers in the Philippines.

All consumers there search for a bargain, if they do not find it in seller A, they walk away and go to seller B, and seller C, until they find the right seller/s offering the right bargain, both in price and quality.

At the national level, even protectionist governments realize the value of free trade, they just cannot hasten the pace of liberalization because they have the vested interests to regulate endlessly and collect as much trade tax revenues as possible.

So one compromise is via bilateral and regional free trade agreements (FTAs) between and among countries. An example is the ASEAN Economic Community (AEC, 10 countries) that materialized since January this year.

Aside from AEC, there are bigger FTAs considered as “mega” trade deals. These include the Regional Comprehensive Economic Partnership (RCEP, ASEAN 10 + 6), Trans Pacific Partnership (TPP, 12 countries), and the Transatlantic Trade and Investment Partnership (TTIP, US + EU).

These mega trade deals will be tackled in one session of the forthcoming 4th Asia Liberty Forum that will be held at the Renaissance Hotel in Kuala Lumpur, Malaysia this coming Feb. 18-20, 2016, which I will be attending, thanks to the assistance of Economic Freedom Network Asia.

The session on “TPP, TTIP, RCEP, AEC & Other Trade Deals: Are they really good for developing countries?” will be on Day 2, to be chaired by Julian Morris, Vice-President of Reason Foundation, USA. The speakers will be (1) Dr. Razeen Sally, Institute for Democracy and Economic Affairs Chair in Political Economy and Prof. at the National University of Singapore, (2) Sethaput Suthiwart-Narueput, Thailand Future Foundation, and (3) Vivek Dehejia, IDFC Institute, India.

Now that the TPP Agreement (TPPA) has been signed by all the 12 member-countries, the next step is for a ratification by each country’s legislature or parliament so that the Agreement will be implemented.

Other Asian countries, three of them from the ASEAN, have expressed their desire to join the TPP in a next round of membership expansion. Here are some trade data about TPP current and aspiring members. 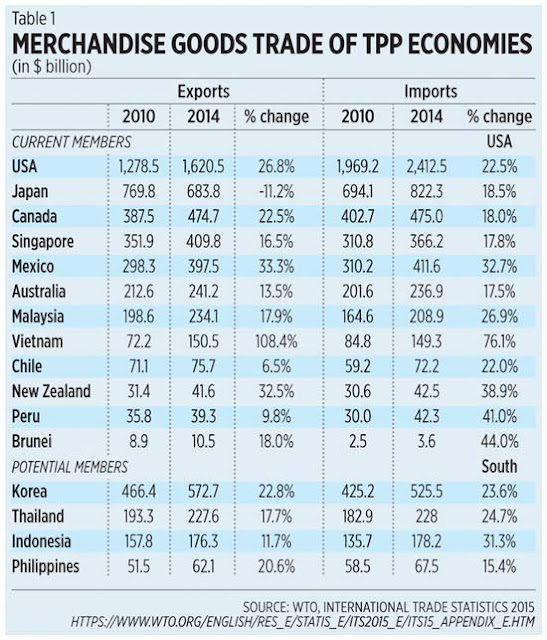 There are two major benefits of joining the TPPA. One, it will reduce the cost of foreign trade, exports and imports, as tariff on both sides are cut or abolished.

And there is one big disadvantage of being outside the TPP. A country will suffer some reduction in exports as TPP members will buy more from each other as they have zero or near-zero tariff for each other, while the old tariff and non-tariff barriers will remain for the non-TPP members.

This was computed by Caesar B. Cororaton and David Orden in a paper entitled “Potential Economic Effects on the Philippines of the Trans-Pacific Partnership (TPP)” (revised February 2015). No need for prolonged, costly and bureaucratic negotiations that takes years or decades.

Just open up the border to foreign goods and allow local consumers and producers lots of choices where and what to buy at low, tariff-free prices. Hong Kong, Singapore, Dubai, Chile, other countries have done this.

The second best policy should have been a multilateral, global trade liberalization, but this is not happening as shown in World Trade Organization (WTO) negotiations. So the real second best policy is via trade blocs like the TPP.

From local bus and taxi companies that import their vehicles, to farmers and fishermen who need more farm tractors and fishing boat engines, to students who want cheaper shoes and mobile phones, people benefit from more choices, lower prices under a free trade policy.

Bienvenido S. Oplas, Jr. is the President of Minimal Government Thinkers, a member of the Economic Freedom Network (EFN) Asia, and a Fellow of the South East Asia Network for Development (SEANET). minimalgovernment@gmail.com
--------------