"The curious task of economics is to demonstrate to men how little they really know about what they imagine they can design.” -- Friedrich Hayek.

One of the characteristics of centrally planned economies like China is that officials and planners centralize many resources, which creates centralized expectations from the people, and since planners’ egos cannot really plan and control all factors, this often results in centralized economic dislocation, disappointment, and anger.

Take the case of China’s debt.

Officially, China has a gross public debt/gross domestic product (GDP) ratio of only 41% in 2014, manageable and just slightly higher than the debt/GDP ratio of Taiwan and South Korea (38% and 36%, respectively). But China has more debt that what it will officially admit.

A report by McKinsey Global Institute (MGI) said that China total borrowings (individuals + companies + local and central governments + state enterprises) was 282% of GDP in 2014, higher than the debt ratio of the US, Germany, Canada, and other big economies. (See Graph 1) 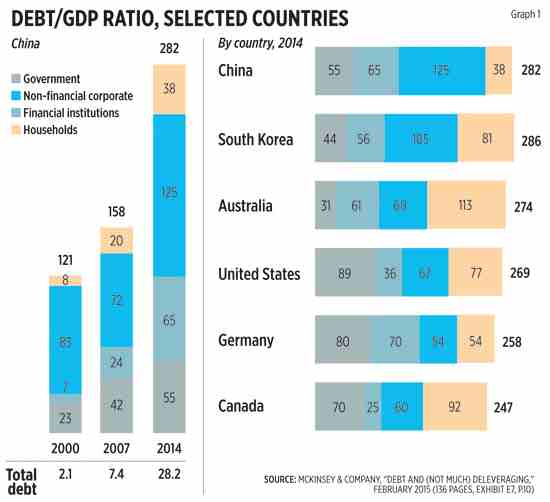 This was discussed in “The Chinese Financial Crises and their Impact on Asia,” one of the panel discussions during the recently-concluded “Asia Liberty Forum” in Kuala Lumpur, Malaysia from Feb. 18-20. The session was chaired by Prof. Christopher Lingle of the Universidad Francisco Marroquin in Guatemala. The speakers were Dr. Carmelo Ferlito, IDEAS Senior Fellow, Malaysia and Adjunct Faculty Member at INTI International College Subang, Malaysia, Andrew Shuen of Lion Rock Institute, Hong Kong, and Dr. Mao Shoulong, Renmin University, also of Unirule Institute, China. These three independent think tanks -- IDEAS, Lion Rock, and Unirule are all members of the Economic Freedom Network (EFN) Asia. (See Graph 2) 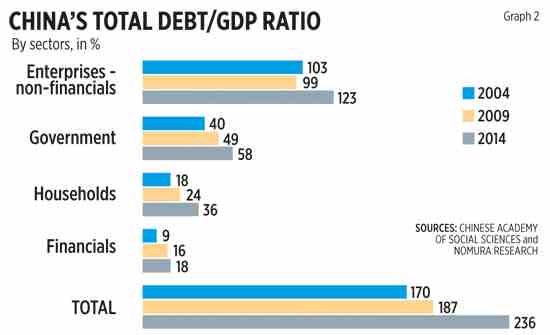 In his presentation, Carmelo Ferlito noted that from 2003-2008, China’s total debt was stable to declining at 170% of GDP, then by 2009, it exploded and kept rising. He further noted that “a lot of this debt is sitting in local governments or state-owned enterprises. There is assumption that government can let its “zombie” entities stumble on as debt-paying vehicles or maybe occasionally let a couple default without any systemic contagion.

But now the Chinese government again began buying stocks to prop up its plummeting stock market, that is unsustainable.”

With the continuing financial turmoil in China that started last year, there are lessons to be explored for emerging economies in the region like the Philippines.

1. Fiscal and household irresponsibility will snap. As public and private debts become bigger, economic uncertainty will also rise as those debts should be repaid. People will never know who can pay back and when, and who will default.

2. Moral hazards. A central planning government tends to attract less-studied behavior by the public. As a result, people with low financial literacy may be encouraged to gamble their savings at the stock market, thinking that the government will bail out anyway.

The great Nobel prize economist and political philosopher, Friedrich Hayek, has some words to say about central planners. It is important that economists and planners outside communist China should heed them.

“No man or group of men possesses the capacity to determine conclusively the potentialities of other human beings and that we should certainly never trust anyone invariably to exercise such a capacity.” -- The Constitution of Liberty (1960), Chapter 6, “Equality, Value and Merit.”

Bienvenido S. Oplas, Jr. is the President of Minimal Government Thinkers, a member of the Economic Freedom Network (EFN) Asia, and a fellow of South East Asia Network for Development (SEANET).  minimalgovernment@gmail.com
--------------