When the Electric Power Industry Reform Act of 2001 (EPIRA, RA 9136) was enacted, among the provisions is the creation of an independent market operator (IMO) to manage the Wholesale Electricity Spot Market (WESM).

EPIRA Section 30 says that “...Not later than one (1) year after the implementation of the wholesale electricity spot market, an independent entity shall be formed and the functions, assets and liabilities of the market operator shall be transferred to such entity with the joint endorsement of the Department of Energy (DoE) and the electric power industry participants.”

WESM was created in June 2006. This means that an IMO should have been in place by June 2007 or nearly nine years ago, but this did not happen. What happened instead was a temporary entity, the Philippine Electricity Market Corporation (PEMC), has become sort of a permanent entity with lots of implicit unwillingness to relinquish its position and privileges. And the DoE Secretary still holds the chairmanship and makes the final decision on many aspects of the body, including who should sit in the board and who cannot.

This insistence by the DoE for this continued non-independent set up in managing WESM has several complications.

One, DoE is overstretching its power to continue chairing an entity that is expressly and explicitly stated by the law to be “independent.”

Aside from DoE as overall regulator in the energy sector, there are other regulators and permits-seeking agencies: (a) Energy Regulatory Commission (ERC) for tariff rates, (b) SEC for corporate matters, (c) DENR for environmental permits, (d) BIR for national taxes and royalties, (e) LGUs for local taxes and permits, and so on.

Two, the ERC has the final say whether generator companies’ long-term pricing via bilateral contracts or spot-pricing via WESM, is “foul” or not. There is no or little need for the DoE to oversee the management of spot pricing.

Three, PEMC does not consider itself a government-owned and controlled corporation (GOCC), but the Governance Commission for GOCCs has identified PEMC as a GOCC. This quickly dispels the notion that PEMC is an independent entity, but rather a state-dependent entity mainly because it is headed by the DoE. Plus two other GOCCs are in the board, the Power Sector Assets and Liabilities Management and the National Power Corp.

Four, the Commission on Audit should now be the main auditor of PEMC, not private auditors like SGV.

The DoE and PEMC should take lessons from other Asia-Pacific countries which have their own electricity exchange markets and their governance structure. These are similar to their respective stock markets and all are independent of government. (See Table 1) 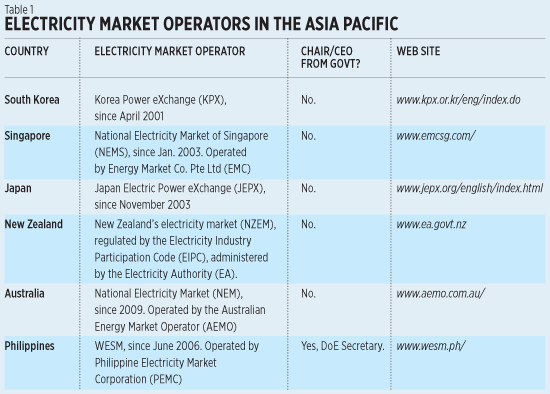 A good example of (a) independent of government and (b) independent of stakeholders and players is the EMC of Singapore. The Board is composed of seven prominent individuals, none of whom are from government nor it seems from any energy players (generation, transmission, distribution).

The main advantage here is that the Board can judge independently but the disadvantage is that they may need a long or steep learning curve and their judgment may be affected by such lack of experience.

One, when we talk of “independent” entity, the first thing that comes to mind is that the agency is functioning independent of the government, not of stakeholders.

For instance, the Philippine Stock Exchange is independent of government and the Board is composed of major players and stakeholders. But Mr. MacDonald and team defined it the other way, “independent” of stakeholders even if the government rules it. I raised this during the open forum.

Two, it may not help to mix up the ISO with IMO in making this kind of analysis.

In the Philippines, the ISO is the National Grid Corporation of the Philippines, it operates the transmission lines and assets owned by the government-owned National Transmission Corporation. The supposedly IMO is currently an Autonomous Group Market Operator represented by PEMC. The above table is composed of IMOs only, no ISOs.

The DoE has uploaded online last Jan. 29, 2016, an ADB-funded research entitled Subproject: Support for the Establishment of An Independent Market Operator, PHI, published in January 2012.

It was prepared by Alastair Macdonald, et al. I just realized that what he presented in December 2015 was almost exactly what they prepared for the ADB paper in January 2012.

While the DoE may be genuinely concerned in protecting the public from high electricity prices via spot pricing, they should also recognize that there are other factors that are bigger contributors to the unhealthy label of the Philippines as having the “second most expensive electricity in Asia next to Japan.”

The Philippines continues to experience “energy poverty” compared to many of its neighbors in the region.

Our per capita electricity consumption in 2013 for instance was larger only than in Cambodia and Myanmar. Total primary energy supply (TPES) is expressed in tons of oil equivalent (toe) per capita. High TPES means higher energy input for agriculture, industry, and services sectors of the economy. (See Table 2) 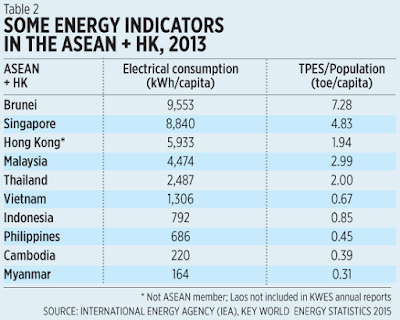 Continued dilly-dallying in implementing a real IMO in the Philippines should be among the contributors why there is low power capacity compared to many of our neighbors in the region. Moreover, it is additional proof that there is too much intervention by different government agencies in the energy sector; interventions that can discourage the entry of more players, or cut the output of current players because of uncertainties in several aspects of the electricity market.

Posted by Bienvenido Oplas Jr at 8:11 AM