Update on the ADB-DOE more electric tricycles, more public debt racket. Why is it a racket?
(1) 100,000 more tricycles, we need less tricycles, not more.
(2) Capex of $300 M loan, Filipino taxpayers will pay, not the ADB, DOE, DENR or LGU officials, nor the e-trike beneficiaries fully;
(3) Opex daily electricity charging, via municipal/city hall charging stations, ultimately the taxpayers.
(4) Political clientelism, cronyism and rent-seeking, we need less of it, not more.

If those e-trikes are really cute, really financially viable, why not leave it to the market and see if operators will take on that business even without taxpayers' subsidy? Chances are beneficiaries and recipients of those e-tricycles will never get that expensive investment. P250,000 per unit alone, the  cost of battery, getting a new one as such battery won't last long, not included yet. http://www.interaksyon.com/.../fat-free-economics-foreign...

Instead of adding 100,000 more tricycles, we should cull and remove 100,000 tricycles from the roads, encourage tricycle operators and drivers to drive instead even a 2nd-hand car or taxi. More e-trikes to "save the planet"? http://funwithgovernment.blogspot.com/.../foreign-aid-14...
n 2012, Greenpeace and FDC attacked this e-tricycle loan by the ADB, for a different reason. They did not want e-trike cronyism, they wanted solar power cronyism, http://www.gmanetwork.com/.../groups-protest-adb-funding...

In 2014, the estimated price of each e-trike is P250,000. Wow ADB, being the debt-pusher of this program, you really want more money from us taxpayers to pay for this expensive and lousy program ha?

And that P250k per tricycle does not include yet the daily cost of electricity charging. I doubt that the favored pol. supporters of LGUs who will receive these e-trikes will charge at home, no. They will charge at city/municipal hall. http://www.mb.com.ph/300-m-adb-loan-dims-on-higher-e.../ 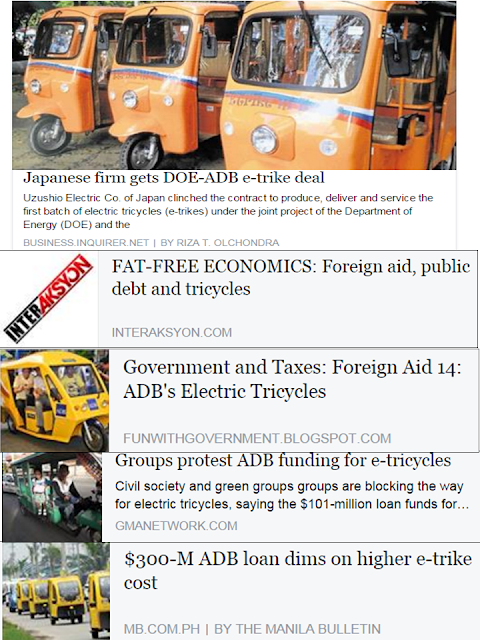 If ADB would lend $300 M say for double-decker buses, or the train-like bus rapid transit (BRT), or electric buses, it would have been more justified. But more tricycles? 100,000 new tricycles? P250k each? daily electricity charging at taxpayers account? ADB naman, panloloko na yan.

I hope that the next administration will cut and discontinue this lousy debt-pushing project by the ADB.
--------------