Both computations are using wrong mathematics. Why?

Simple, the numerator is cumulative wealth or wealth accumulated over a period of many years (earnings, savings, investments, reinvestments) while the denominator is GDP size for only one year, or estimated country wealth for only one year.

Oxfam has produced a sensational report published in January 2016, Wealth: Having It All and Wanting More.

It claims, among others, that:

If the data and math are correct, that is indeed a revolting statement. But Oxfam used faulty math in equation (b) to make that false statement. It used data from Forbes Billionaires for its numerator, and Credit Suisse’s (CS) Global Wealth Databook 2015 for the denominator.

Of the 48, only 17 have complete data, the other 31 countries cover only financial assets and debts. Then three countries have household survey data where wealth levels can be calculated. These 51 countries (48 + 3) cover 66% of the global population and 96% of total global wealth, estimated to be $263.24 trillion in 2014.

For the other 160 countries that lack direct data, CS used econometric techniques to generate estimates of the level of wealth. Thus, for many countries, the quality of wealth data is labeled by CS itself in Table 2.1 as either “poor” or “very poor.”

On the super-rich, let us take the case of the 5 richest person in the world from Forbes Billionaires report. (See table) 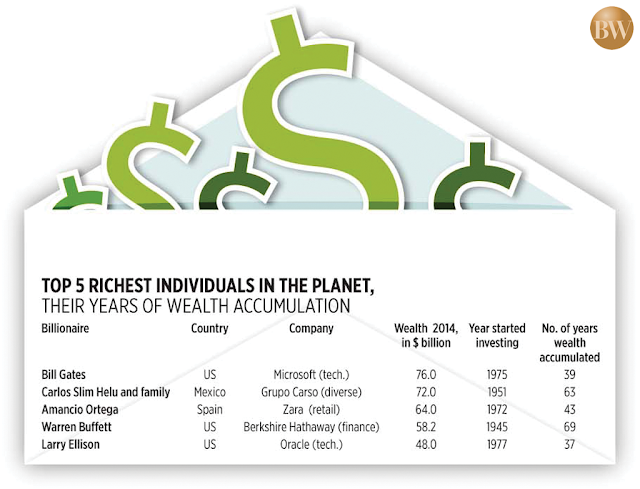 Notice that ALL five of them made their fortune on their own, did not inherit huge money from their parents. It is mainly a case of hard work, efficiency, and luck.

But Oxfam gave the impression that those wealth accumulated through four to seven decades of savings and reinvestments are comparable to national and global wealth flow in one year.

So because Oxfam made wrong math and wrong assumptions, it proposes wrong and questionable proposals to fight high inequality. Below are five of their nine proposals, my comments are indicated by:

Meaning the bulk of the fruits of efficiency, hard work and innovation should go to governments, the UN, other central planning agencies. Get more money from the super rich and distribute to the poor, with huge pay, allowances and perks to the central planners, policy makers, consultants and administrators of a massive global wealth redistribution.

2. Increase minimum wages towards living wages; and close the gap with skyrocketing executive, move towards a highest-to-median pay ratio of 20:1.

Meaning as entrepreneurs grapple with rising labor cost for the skilled workers, the unskilled will hardly be hired and unemployment will rise.

3. Share the tax burden fairly, shift taxation from labor and consumption towards wealth, capital and income from these assets.

Meaning there should be no more tax competition, only tax harmonization and uniformity; create a new global tax bureaucracy that will bully economies that charge very low taxes.

Governments should expand public spending including giving benefits to people who do not want to work, or are hired but frequently fired due to laziness and irresponsibility.

People should avoid that lousy computational approaches shown above.

To get a more realistic picture of inequality, they may use this approach,

Finally, Oxfam is silent on the more important function of government, that of enforcing the rule of law and protecting private property.

A poor person may have free education up to college for the kids, free health care and medicines, free or highly-subsidized housing, monthly cash transfer, and allowance from the state, and so on. Fine.

Of what use are these if the kids can be easily abducted and sexually abused if not murdered, if the small investments like a tricycle or farm animals or tractor can easily be stolen, if a small piece of land purchased can be easily land grabbed?

Protection of private property rights, protection of people’s right to life against bullies, rapists, and murderers, is a more important function of government, not having endless subsidies and welfarism funded by endless taxation, driven by the politics of envy.