Among the presentations  that I enjoyed during the EPDP  Conference  2016 last month  held at New World Hotel in Makati were the UPSE graduate student papers. There were 5 papers from 5 presenters, all good. In particular, I like this paper by Ms. Bajaro, reposting here.
-----------


The Cost-Effectiveness of the Energy Sources in the Philippines
By DONNA FAYE E. BAJARO

This proposal seeks to analyze the least cost-effective energy technologies in the Philippines. Specifically, this intends to know the following:

* Depletable resource like coal is relegated as dispatchable while renewable resources are classified as intermittent generating technologies. 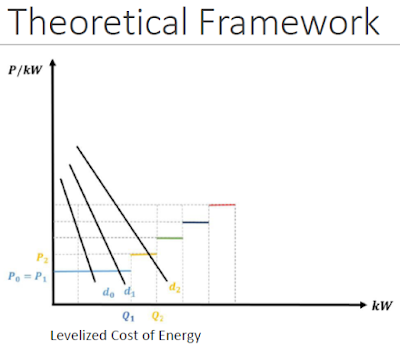 Levelized Cost of Energy (LCOE) – stream of equal payments normalized over the expected energy production that would allow the system operator to recover all costs, which reflects the capital and operating costs of deploying and running new utility-scale generation capacity of any given type, over a predetermined financial life. 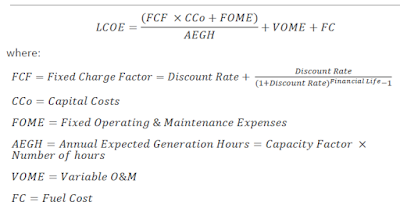 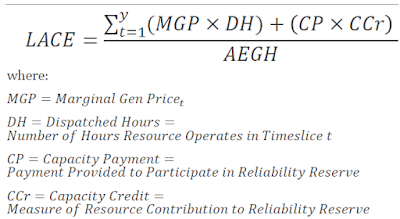 The net value is being used for the comparison of the cost-effectiveness of each energy source since it determines if the economic value exceeds the costs.

Notice that the energy produced by the intermittent technologies with zero fuel cost are the cheap ones. These are geothermal, wind, solar, and hydropower, respectively.

In 2012, the average spot price of electricity in the Philippines is PhP5.08 per kWh (Almendras, 2012) which could possibly increase by a factor of 10 within a day because electricity is costly to store (Borenstein, 2012). See Table 2

Geothermal and hydropower have higher LACE estimates than wind and solar.
Biomass has the least LACE value and is ten times lower than coal.
The increase in the variance of the energy supply, which is largely attributed to the intermittent technologies, contributes to the risk of system outage that consequently incurs large welfare losses. System outage happens when the supply could not meet its demand (Gowrisankaran, 2011).
Thus, dispatchable technologies like coal have the greatest advantage.

In this base case scenario, coal gives the highest positive net value, and biomass yields the only negative net value making it the least cost-effective. Take note that biomass is PhP2.81 per kWh lower than coal, that is 273% significantly lower.

Coal and biomass are still the most expensive energy sources while geothermal remains to be the cheapest. Moreover, coal, hydropower, and geothermal have the highest potential revenue. This means that the producers must invest more in these three. However, biomass has the potential loss of PhP1.57-1.79 per kWh.

Even if the cost of generation of coal is one of the highest, its avoided cost is still the lowest since it is dispatchable, i.e. it can be supplied at any amount regardless of the weather conditions. This gives the highest positive net value among the energy sources. This implies that the production of electricity using the coal technology is the most profitable, and therefore, cost-effective. 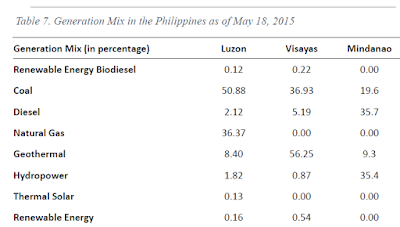 The country must continue the utilization of the (CHG), and more importantly, the exploration and development of coal and allocates the produced electricity to Visayas and Mindanao.
Consistent with the policy thrusts of the Philippine EnergyPlan2012-2030 (DOE,2012).

The assumptions are longer time horizons, and perfect substitutability of the depletable and the renewable resources.

There will come a time that the depletable resource will be fully exhausted, and at the switch or transition point, the use of renewable resource is on the onset. Therefore, the country must utilize the coal until it is completely exhausted and it is no longer cost-effective even if there are left coal reserves on the ground (Tietenbergand Lewis, 2011).
---------------