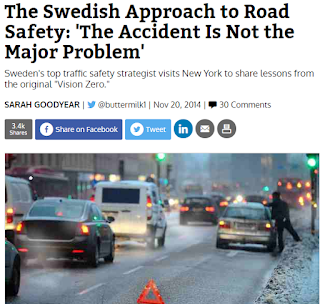 There was an article from Citylab 1 1/2 years ago shared by a friend, about road safety in Sweden. This part is particularly striking to me:

Very often, government is a way for double-cross and double highway robbery. It gets lots of taxes and fees from us, the money is largely used to hire more bureaucrats and officials whose main function is to create more restrictions and regulations that translate to more fines, penalties and extortion of the public. Government should not be called "public service" but plain "government regulators". It is the private sector that is really "public service". You need something, you pay for that service or product. You don't like anything, that person or business will go bankrupt. It is only through real public service that a private business can survive and expand.

When I was in Sweden in September-October 2003, I noticed those road safety regulations. Like all cars have their headlights on automatically when they turn on the engine, even at day time. This helps make all of them visible, especially during wintertime where the length of day is short, only a few hours then things become dark. The highways are also fenced so that wild animals like those huge elks, deer, do not wander accidentally in highways and cause accidents. Max speed is 100 kph even if one is driving a ferrari or benz.

Then when I went to Germany after my training seminar in Sweden, late October 2003, I noticed the big difference in road regulations. Many highways there have no speed limit, one can floor the accelerator to 200+ kph and don't get a ticket violation, except in some areas where max speed is controlled, like a big interchange or entry/exit to a big city.
Posted by Bienvenido Oplas Jr at 11:17 PM