Power generation in the Philippines generally kept up with its ASEAN neighbors in the 1980s up to the early 1990s. By 2000, power capacity in many of our neighbors have doubled or tripled while the Philippines’ has less than doubled. By 2010, Indonesia, Thailand, Malaysia, and Vietnam have kept doubling or tripling their power generation levels in just one decade while the Philippines’ has expanded by only 50%.
The figures for China and South Korea are similar, doubling or tripling power capacity every decade. It is not possible to sustain high economic growth without high and stable electricity supply for households and companies. 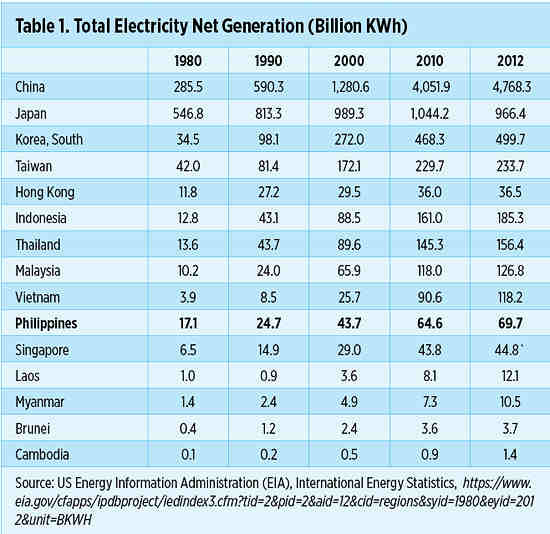 High power production means high or fast growth in power consumption per capita. Or the reverse, slow power capacity expansion means low consumption per capita, and this is what happened in the Philippines. Until 2000, our per capita consumption was higher than Indonesia and Vietnam, and only one-third that of Thailand. By 2010, things turned around: ours were lower than those in Indonesia and Vietnam and only one-fourth of Thailand. Cambodia is catching up with four times expansion of power capacity in just one decade from 2000 to 2010. 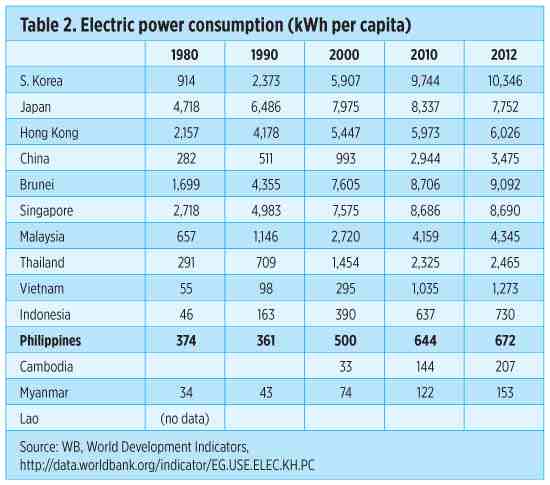 Note that the Electric Power Industry Reform Act (EPIRA) was enacted in 2001. The law has deregulated and demonopolized power generation where before, Napocor was the single power producer and owner of power transmission nationwide.

So has EPIRA restricted power generation or has the law saved the industry from atrophy? Based on previous columns on the energy sector, various government bureaucracies, local and national, are major contributors to a soured business climate in power generation. Securing nearly 200 different permits and signatures from different agencies over a period of 2-5 years before one can start real power plant construction is no joke.

Power generation companies (gencos) secure bilateral supply contracts with different distribution utilities (DUs) and electric cooperatives (ECs). DUs and ECs are considered as “utilities” and hence, are described as natural monopolies. Zero competition allowed, they just need to secure a Congressional franchise for 25 years, an arrangement that can be renewed.

Outside the contracted power, gencos have extra capacity to produce and sell. DUs too need extra capacity during peak hours on weekdays, or during the hot months of March to May, during fiesta season in many cities and municipalities, and so on.

For such uncontracted power, both gencos and DUs go to the Wholesale Electricity Spot Market (WESM) to buy and sell electricity. The lead time for spot pricing is not one week or one day but only few hours before electricity supply need to be expanded or curtailed.

WESM is governed and administered by the Philippine Electricity Market Corporation (PEMC). It is a weird body because EPIRA of 2001 says there should be an Independent Market Operator (IMO) that should administer WESM, but PEMC has become a bloated government bureaucracy pretending to be a private bureaucracy.

PEMC Board is a 16-man body chaired by the Department of energy (DoE) Secretary plus 15 Directors: 4 from gencos (2 from government, PSALM and NPC, and 2 private), 4 from DUs (2 from ECs and 2 non-ECs), 4 independent of the power industry, 1 from WESM customers including suppliers, 1 from the National Grid Corporation of the Philippines (NGCP) representing the system operator and Transco, and 1 from market operator represented by PEMC itself.

I was able to secure the transcript of three Committee hearings of the Senate Committee on Energy (October and December 2015, and January 2016) headed by Sen. Serge Osmeña, thanks to his staff Vina.

From those transcripts and related readings, I gather these eight questionable or weird things in the PEMC Board and WESM.

First, PEMC is supposed to be an IMO yet there are several government officials sitting on its Board, including the DoE Secretary and representatives from the Power Sector Assets and Liabilities Management Corporation (PSALM) and the National Power Corporation (NPC). The NGCP is a private corporation but it is representing a government corporation, Transco. Then there are advisers to the Board, two of whom are from government, a DoE Undersecretary and the National Electrification Administration (NEA).

Second, the actual power production of PSALM and NPC are small, almost negligible from the genco mix of Meralco for instance, yet they are almost permanent members of the Board.

Third, those 4 independent directors and the consumer representative (5 total) are all appointed by the DoE Secretary and hence, should be friendly to the government.

Fifth, all the income of PEMC and WESM is collected from the gencos, especially private gencos, and the private gencos have only two seats. No collection from DUs, from independent Directors, from consumers, from system operator and market operator. The ERC and DoE get a certain percentage from the total WESM revenues.

Seventh, being a GOCC pretending to be a private corporation, part of its collections or revenues are being used by the DoE and ERC for their respective regulatory and policy formulation functions. PEMC budget is also approved by the ERC, then PEMC should be audited by the Commission on Audit but currently, private auditing firms do the job.

And eighth, gencos pay for all the market fees at WESM and they are subject to price control via primary and secondary price caps. Their peaking plants need to charge higher on those few hours they run to compensate for many hours a day that they are not running and still make a profit, and pay more market fees yet they are restricted from doing this via price control.

So if you are a genco and you are subject to these kinds of policy distortions and bureaucratic interventions at WESM -- and paying for all of it -- that creates another layer of disincentive to do business.

And that will further put some brakes on an otherwise huge demand for fast and high generation capacity so we can catch up with our neighbors like Vietnam and Indonesia. In this age of ASEAN economic integration, energy-intensive sectors can put up their manufacturing companies in cheaper-energy countries like Indonesia, Vietnam, Cambodia, and Thailand, then export to the Philippines at zero tariff. Also, energy-intensive services like hotels (lights, aircon and elevators running 24/7) and tourism can expand faster in cheaper-energy countries than in expensive-energy countries like the Philippines.

We need less government interventions and distortions in the energy sector. It is among the important prerequisites for the Philippines to grow faster and create more jobs and businesses to the people.

Bienvenido S. Oplas, Jr. is the head of Minimal Government Thinkers, a Fellow of the South East Asia Network for Development (SEANET), and a member of the Economic Freedom Network (EFN) Asia. All three entities support the philosophy of classical liberalism in politics and economics.
minimalgovernment@gmail.com