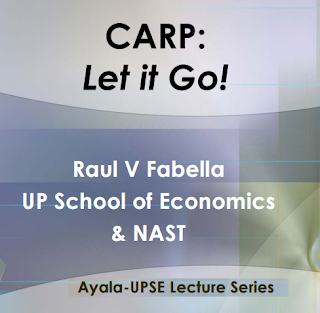 I am reposting portions of a presentation by Dr. Raul Fabella made at UPSE in May 2014. I agree with his arguments -- the endless, forever extended deadline of agrarian reform (AR) or forced land redistribution should end. It is now 44 years since the Marcos AR program in 1972, longer if AR programs in the 50s and 60s by previous administrations are counted.

Forever AR is a major source of uncertainty for agri business development and modernization. For instance, you buy and convert a 10 hectares low-productivity farmland, spend huge amount of time, years and money. When the land has become productive and you start earning big to get some returns for your investments and hard work, pay for some loans, the Department of Agrarian Reform (DAR) people can suddenly come in from nowhere to tell you that your land will be forcibly redistributed by the government to your workers. The government will pay of course, but at lower rates and valuation dictated by the state, not at prevailing market rates and prices.
--------------- 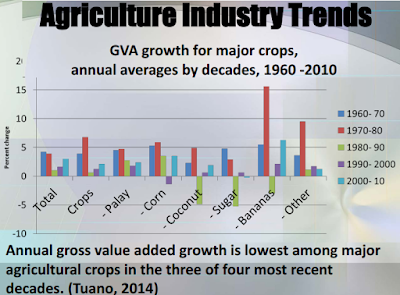 * By 2014, CARP shall have distributed 5.05 million hectares, leaving but 321 thousand hectares or an accomplishment rate of 99%.

* 2.6 million farmers shall have gained some form of ownership to an average 1.2 hectares, shall have acquired and distributed 16% of the total Philippine land area of 30 million hectares.

* Japan’s vaunted land reform distributed only 1.76 million hectares of its total 37 million or 4.7%.

• But when other factors are controlled for, neither being an ARB nor being an ARC member explains differences in income per capita.

• This implies that “land ownership via CARP” is an “inferior type ownership.”

• Our hypothesis: inferiority is associated with Section 27 and Section 6 (the land ownership ceiling of five hectares) of CARP.

• Being an ARB correlates negatively with access to formal credit even though land ownership correlates positively. This shows the property rights frailty of CARP.

“Twenty years later, the results of the Comprehensive Agrarian Reform Law (CARL) launched in 1988 were below expectations. Productivity growth in agriculture has been low by regional standards and poverty still plagues rural areas. Total agricultural factor productivity has grown only 0.13% per year during 1980-1998, compared to 0.87% per year in Thailand and 1.49% in Indonesia…”

• Unequal exchange: The productivity of land depends in its capacity to command financing. CARL effectively outlawed that capacity, making the land conveyed to the beneficiaries “effectively inferior” to that bought at market price from the landowner.

• Entrepreneurship Myth – give a tenant a piece of land and he/she morphs into an entrepreneur. Self-selection be damned.

• The market be damned! The state supplants the market as arbiter of efficient use of assets.

• Economic size: If the land (3 hectares) is not “economic size” for a crop and location, it is a high-default risk, loses the capacity to command credit and is worth less than as part of a larger credit-worthy parcel.

The beneficiary is short-changed and condemned to fail! Economically unviable property rights are not stable.

• Size Economies: if economic size farm for a crop in a vicinity is > 5 hectares, consolidation will go underground (up to 100% in some villages) where property rights are unstable.

(India’s land ceiling ranges from 4-21 hectares depending on state; Sri Lanka’s is 20 hectares; and Cuba’s is 67 hectares!)

• Comprehensiveness: Same rules for all crops, whereas successful, templates stopped at rice lands! The Marcos effect?

• When a state overreaches, the result is a state failure: actions by government makes market failures look like God’s gifts.

• The Philippines widely recognized as a weak state: does too many things badly; too many windows for waste and corruption; it should do fewer things well.

The 1662 Book of Prayer expresses best the relation between societal health and state overreach: