Free trade and voluntary exchange of goods and services by people across villages, cities, islands, countries and continents is the hallmark of modernization and improvement of human condition. Goods and services of certain quality and quantity that are not available locally are made available by liberalizing their entry from many parts of the world.

Protectionism and economic nationalism in various shades however, has limited the march of faster global economic integration. Thus, multilateral negotiations towards global free trade was invented via Uruguay round and its predecessors, and later via the World Trade Organization (WTO) since 1995.

This has proven to be a disappointment than a success in realizing global free trade as various types of non-tariff barriers (NTBs) were invented by many countries. So regional and bilateral free-trade agreements (FTAs) were invented to hasten the process.

So far, economies that have progressed and expanded faster than the average are those that embarked on unilateral trade liberalization. Yes, one-way liberalization without waiting for other countries and trade partners to liberalize and reduce tariff by the same amount. It may be a reduction from 20% to 10% or 4% in a span of few years, or down to zero.

There are many economies that embarked on unilateral liberalization, including the 10 ASEAN countries like the Philippines. The pace of tariff reduction in the past 2 decades were fast, much faster than tariff reduction in other regions of the world.

This paper will briefly review the experience of five economies: Hong Kong, Singapore, New Zealand, United Arab Emirates (UAE), and Chile. These countries have a small population of 7 million or less except Chile and UAE, thanks to expats and foreign workers that constitute about 85% of UAE current population (see Table 1). 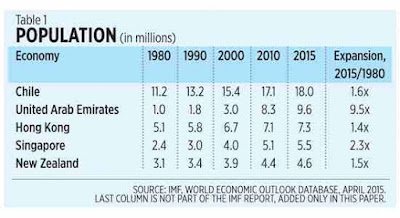 1. Hong Kong. A small free port economy which thrives on free trade -- no barriers on trade, no tariff on imports or exports of goods. Its early open door policy made it one of the world’s largest trading economies, an international financial and commercial center in the Asia-Pacific region, at a time when many countries and economies have turned nationalist, protectionist and even socialist, years after World War II.

Import and export licensing are kept to the minimum, imposed only when there is real need like obligations to trading partners, or meet public health, safety or internal security concerns.

Literally, HK imports in thousands of container ships, and exports in hundreds of millions of shopping bags. Free trade attracts lots of visitors from other countries who think certain goods are not available in their countries or available but at higher prices. Any “losses” in import tax revenues are more than compensated by local tax revenues when millions of visitors and investors come to Hong Kong to spend. Major winners are the airlines, hotels, restaurants, theme parks, malls and shops, other players in the hospitality and tourism industry.

2. Singapore. Created only in 1965 after separation from Malaysia, the people embarked on an open, free, competitive economy, opening up lots of opportunities for the entrepreneurs. With a few exceptions, tariff is zero. Total merchandise trade is almost four times of GDP, FDI inflows are big. Import restrictions, if any, are based mainly on environmental, health, and public security concerns. Rice is subject to import licensing to ensure food security and price stability. Otherwise, international trade is highly encouraged.

But while Singapore has unilateral liberalization in goods, it practices protectionism of its services sector. Thus, many countries have arranged for bilateral and regional FTAs with Singapore, focusing on services liberalization. These include mutual recognition of standards, enhanced investment protection disciplines, protection of intellectual property rights (IPR), and elimination of anti-competitive practices, establishment of a competition policy.

3. New Zealand. Being so geographically detached from the rest of the world because of its location -- it is closer to Antarctica than mainland China -- the country has no choice but to engage in stronger global trade to enable it to procure many things and services that are not available locally.

In its mid-80s liberalization, tariffs were removed (zero rate) in a wide range of goods without domestic competitors, while reduced in others. Overall tariff has decreased from 27% to 7% in 1997. Import licensing was also gradually removed and other forms of export assistance were also greatly reduced (Grafton et al., 1997).

An editorial from the NZ International Business Forum (NZIBF) about two years ago summarized it this way: “History of trade in New Zealand is that our quality of life plummets when we are shut off to the global market. We do not get rich by selling to ourselves.”

4. Chile. The economy before the military take over in 1973 was characterized by high and dispersed import tariffs, import prohibitions, quantitative restrictions, and distortionary multiple exchange rate system. The fall of democracy in the country ironically paved the way for economic reforms which liberalized the country. First was reduction and simplification of trade barriers with more than 60% of tariffs removed and import restrictions eliminated.

In 1985, liberalization continued with the uniform tariff decreased to 20% and further to 15%. Reforms continued despite transitioning back to democracy. An independent central bank was established and the uniform tariff was again reduced. Currently, the country is pursuing several trade agreements (Edwards & Lederman, 1998).

A WTO annual report 2009 described it well, “Chile’s trade and investment regime continues to be characterized by openness, transparency, and predictability... Since the last review in 2003... modernize customs and facilitate trade, maintained a single MFN [Most Favored Nation] tariff rate of 6% with a few exceptions, abolished some import taxes and export subsidies...”

5. United Arab Emirates. Founded only in 1971, its seven emirates include world-famous cities like Abu Dhabi and Dubai. It is the second largest economy in the Gulf after Saudi Arabia. Its free-trade zones allow (a) 100% foreign ownership of enterprises, (b) 100% repatriation of capital and profits, (c) zero import and export tax, (d) zero corporate tax for up to 50 years, and (e) zero personal income tax.

Generally, it is heaven for global businesses that locate there. This change in policy, the rapid liberalization in goods and services allowed or necessited the entry of millions of expats and foreign workers, which now comprise around 85% of UAE’s total population.

Here is one summary of the performance of the five economies that embraced unilateral trade liberalization (see Table 2). 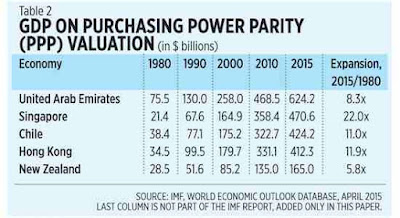 As a result of liberalization, these economies have expanded: 22 times for Singapore, eight to 12 times for UAE, Chile, and Hong Kong in just a span of 35 years. That is almost a miracle. New Zealand is a bit different because of its geography. Even if tariffs for all imports are zero, its distance from major economies in North America, Europe, and Japan necessarily makes shipment costs high. Which largely explains for its slower economic expansion.

The Philippines should pursue a policy of unilateral trade liberalization, in goods but more so in services and the practice of different profession. By opening up those professions to foreign competition, Filipino customers will have more choices, the Filipino professionals themselves will learn from their foreign allies and competitors, and the policy will earn benefits will that will open up opportunities for Filipino professionals to practice in more countries around the world.

Bienvenido S. Oplas, Jr. is the head of Minimal Government Thinkers, a Fellow of the South East Asia Network for Development (SEANET), and a member of the Economic Freedom Network (EFN) Asia. All the 3 entities advocate free trade. minimalgovernment@gmail.com
---------------