Our regional health group, the Emerging Markets Health Network, has produced a new paper, EMHN Briefing No. 1: Fake Medicines in Asia. Authored by Philip Stevens and Helmy Haja Mydin, the paper has argued that

Fake medicines - which are either criminally motivated or the result of lax manufacturing standards - are a worsening problem, particularly in Asia. In some of poorer parts of the continent, up to a quarter of medicines fail quality tests.

Evidence shows that cheap generic drugs are the most faked medicines in Asia, although there appears to be a particular problem with anti-malarial drugs in places such as Laos and Cambodia. China and India appear to be production hotspots.

Producers and purveyors of fake medicines are exploiting the increasing globalisation of the pharmaceutical supply chain, poorly defined and  enforced civil and criminal laws, and a lack of an international definition
of what legally constitutes a fake medicine. 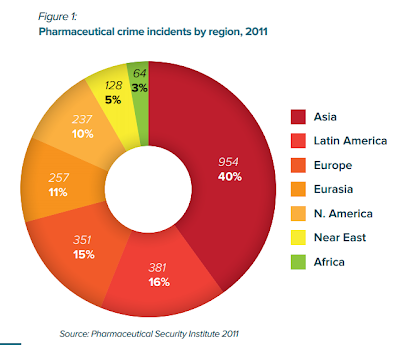 The presence of counterfeit or substandard drugs is a problem here in the Philippines. One time, an anesthesiologist friend told me, a patient was lying on the operating table, surgeons were about to slice his tummy, so the anesthesiologists come first before them. The injected substance is supposed to make the patient feel numb and sleep, within minutes. But after giving the necessary dosage, the patient was still awake and numbness was light. He would be shouting in pain if the surgery would proceed. They realized that they got a fake or substandard anesthesia from one local pharma company that was purchased by the hospital. Right there and then, they scrambled to get another anesthesia as the surgery must proceed that day, otherwise the patient's condition will deteriorate.

So the doctors wrote tot he FDA in a confidential letter to complain about the product of this local company, and the latter knew about their letter, they must have a "mole" inside the agency. This company threatened to sue the doctors for criticizing their company. I offered to write about the story but the physicians were hesitant to give me full details as it is still under FDA investigation.

The report did mention about the case of fake medicines in the Philippines. 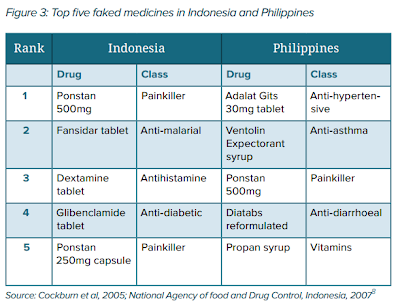 How to solve this increasing problem? The usual solution by many groups is... more legislation, more government. The authors, and I agree with them, caution against this move. They wrote,


In countries where the rule of law is weak, the creation of new regulatory layers and tougher criminal sanctions may be counterproductive, as new powers for regulators create opportunities for bribery and corruption.

To be effective, stiffer criminal penalties depend on an efficient and fair rule of law, something which does not exist in many Asian countries, particularly the poorer ones which have the greatest problem.

Stronger criminal penalties will likely drive activities further into the hands of organised criminal cells and will also likely result in further corruption, as the criminal cells seek to infiltrate law-enforcement agencies. The fake medicines trade is already showing worrying signs of mafiaisation, with organised crime groups such as Chinese triads and Mexican drug gangs all becoming implicated in the trade over the past decade.

More effective solutions must address its fundamental cause, which revolve around the inability of legitimate manufacturers to protect the integrity of their brands. Legal reforms can go some way towards addressing these problems, as can innovative uses of technology.


Protection of intellectual property rights (IPR) like patent and trademarks, enforcement of existing laws against such bad practices, or simply promulgate the rule of law, is the best thing that governments can do, not the creation of new and more regulations and laws.

Civil society groups concerned with or engaged in public health issues would better focus their energy more in battling this bigger problem of proliferating fake medicines, instead of circumventing or disrespecting IPR. As the report noted, the more faked medicines are the known branded generics more than the innovator drugs.

EMHN is a project of the Institute for Democracy and Economic Affairs (IDEAS) in Kuala Lumpur.
-------------