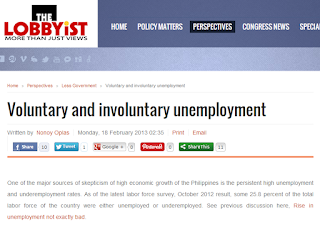 One of the major sources of skepticism of high economic growth of the Philippines is the persistent high unemployment and underemployment rates. As of the latest labor force survey, October 2012 result, some 25.8 percent of the total labor force of the country were either unemployed or underemployed. See previous discussion here, Rise in unemployment not exactly bad.

There are two main reasons why a person is unemployed. One is that he is rejected due to under-qualification or over-qualification (may demand higher pay later on), and two, he chose not to be hired at a particular job description and pay. The first is involuntary unemployment, outside the control of the job applicant while the latter can be considered as voluntary unemployment, within the control of the job applicant.

One news report, Lots of jobs for college grads, but do they want the work? cited, “more than 40 percent of the unemployed college graduates cited ‘no job opening in field of specialization, no interest in getting a job, starting pay is low, and no job opening within the vicinity of residence.’ as reasons for unemployment.”

This explains the “voluntary unemployment” phenomenon. There are jobs available for many college graduates but they chose not to take those jobs, at least temporarily, hoping that a job related to their course, or a higher paying job, or a job near their house or city, would be available soon.

Here are more numbers, notice the high incidence of unemployment among college graduates.


Most economic literatures analyzing the unemployment phenomenon focus on what the government should do to improve the employability of the population, the college graduates especially. Thus, the favorite policy interventions and proposals are higher spending in government education from elementary to tertiary. The K+12 education has recently been implemented. This is the mandatory kindergarten + 12 years in elementary and high school, or 13 years of schooling before a student can go to college.

There are several problems with this approach. One is that there is high focus of training students to become employees, to be “more employable” someday and less as entrepreneurs and job creators themselves.

Two, there is lack of trust in self-learning by students with the help of modern technology. Self-learning as augmentation to school education is a good training ground for self-employment and entrepreneurship someday. Instead, students are mandated to spend more years in the schools, in government elementary and secondary schools especially.

And three, there is high additional cost to parents as well as to public spending with the extension of mandatory elementary and secondary education to 12 years. As if there is no huge budget deficit every year and the public debt stock is not rising every year.

Both voluntary and involuntary unemployment among college undergrads and graduates would have been lower if these young people were trained for self-employment and entrepreneurship early on, and if government policies are more business friendly than they are now.

Another important policy that the government should undertake to improve domestic labor productivity and employability is to open up the economy more to foreign competition in trade and investments. In a PIDS discussion paper on Philippine Productivity Dynamics in April 2012, Dr. Gilberto Llanto wrote,

The key to reduce unemployment, both voluntary and involuntary, is more entrepreneurship, more business competition, freer markets in all factors of production – labor, capital, technology, land – and not more government debts and bureaucracies, more stifling taxes and fees.
-----------