The mining is perhaps the most regulated, most intervened, and most taxed sector by the government. Coming second would be the pharmaceutical sector, and perhaps the water and other utilities. One important indicator that there is heavy government regulation and taxation of a particular sector is the high presence of the informal or black market for such sector.

In the case of mining, the black market is the high presence of the  so-called "small mining" like in Mt. Diwalwal in Davao. In the pharma sector, it's the existence of so many unregistered "health products" like the "magic coffee" (or tea, juice, etc.) that can treat all types of cancer, TB, diabetes, and two dozens or more of other diseases, or even the fake and substandard medicines.

Last November 27, 2012, I attended the Philippine Economic Society (PES) 50th Annual Conference held at the PICC in Manila. In the afternoon session, I attended the panel on Mining Taxation. There were several speakers, like the IMF Philippines Country Director, one from the Asian Institute of Management (AIM), one from the DENR Mines and Geosciences Bureau (MGB), another one from UNDP I think, and the Chairman of the Chamber of Mines of the Philippines (CMP), Dr. Artemio Disini, also of the UP College of Engineering.

Of the various presentations, the most substantial for me was the paper by Dr. Disini. I got a copy of his powerpoint, posting here some of those slides. I will post the slides on mining taxation in another blog post as it seems to be the most controversial aspect that will require legislation.

From Dr. Disini's presentation, there is indeed huge investment, both actual and planned or potential, in the Philippine mining sector. See these two slides below. Please note again that these data were as of November 2012. There could be some slight changes in the data by now, am not sure. 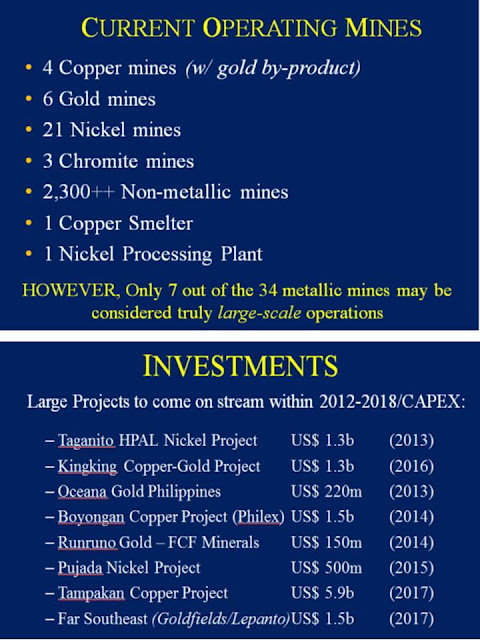 The biggest is the Tampakan project by Sagittarius Mines, Inc. (SMI). Almost $6 billion, wow. It's a weird case. The company has already started so many infrastructures when suddenly the provincial government of South Cotabato passed a resolution banning open pit mining, so the operation was halted. You pour huge amount of money and human resources and suddenly one branch of the government, the provincial government, says "Stop!" wow.

I read today that Finally, Tampakan mine environmental clearance okayed. But still the company cannot operate because the moratorium on mining is still in effect unless a new law on mining taxation and other matters is enacted.

Below is a good map of where the big copper and gold mining projects are located. In copper mining, only three companies are operational while seven are still waiting for the final go signal from the government. Companies in gold projects are "smaller" compared to copper projects. 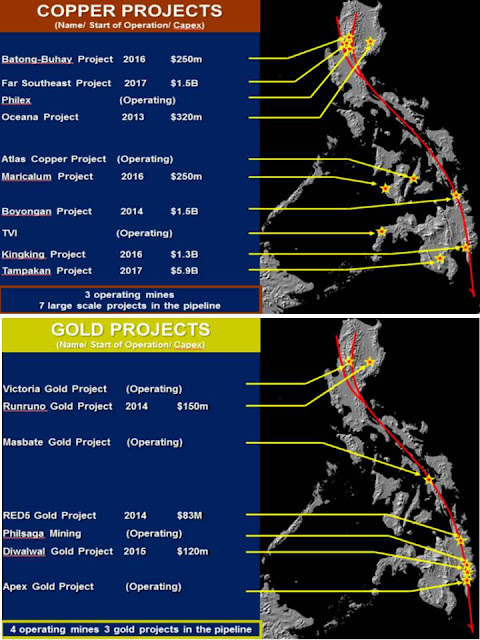 For nickel, the four companies still on the pipeline are pouring huge money, average of some $1 billion each. The projected exports revenues of those companies in the 3 metallic products would reach some $12.3 billion by 2018, that's a big amount indeed. But that is still a big IF because industry players, both existing and potential, cannot really predict what the legislators in the Senate and House of Representatives, as well as the Governors and Mayors in the provinces, will do with their existing and proposed investments.

The only saving grace of the Philippines perhaps is its geology. In the "Pacific Rim of Fire" where about 80 percent of all earthquakes and volcanic eruptions in the planet occur, those volcanic and other geological movements would turn ordinary rocks beneath the surface into something precious metallic rocks. 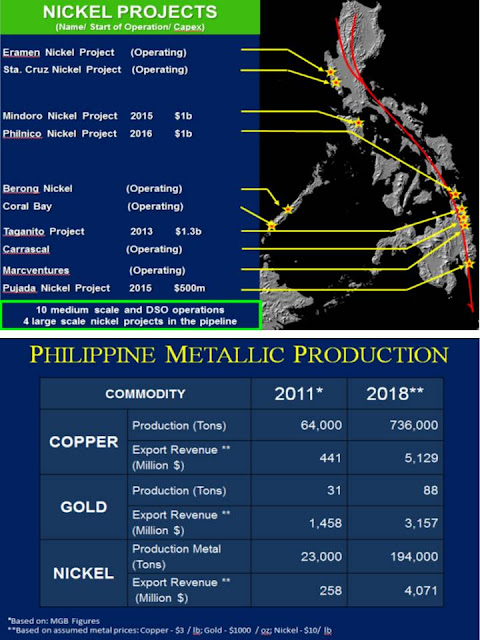 The table below summarizes the huge potential of the sector for the country's economy -- in investments, export revenues, taxes -- and the tens of thousands of jobs to be generated in the provinces. The government and the politicians should be jumping with joy with these rosy pictures of money and taxes that will come in the next few years. So why are things made more difficult for the sector, especially the formal, fully government-registered large mining companies? 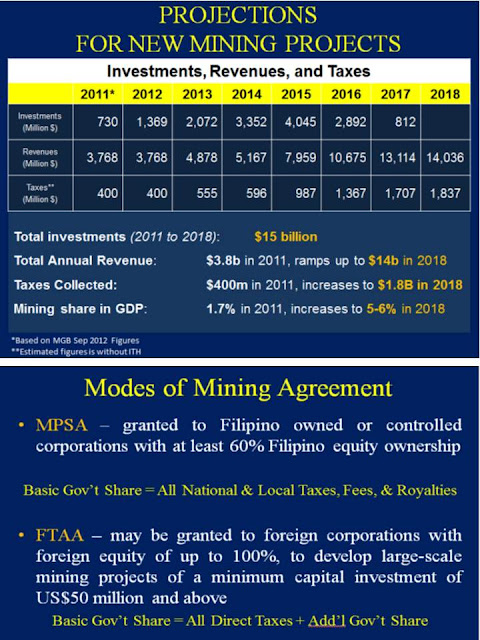 Mining is also the only sector where the companies are required, are coerced, to provide various social services (hospital, school buildings, open parks, etc.) to the community residents even if they are not employees of the companies. 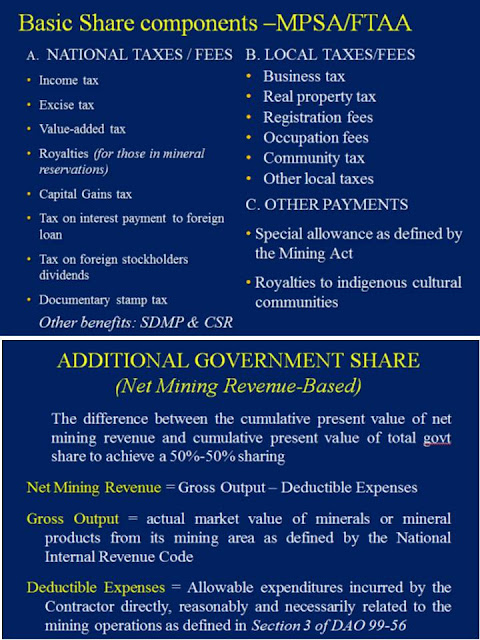 Can anyone beat that? Government taxes and taxes these companies so that government is supposed to  have more money to provide social and economic services to the people especially those in rural areas in the provinces. Then government forces these companies to provide various social and economic services including giving the rural folks lots of jobs, direct and indirect. So government now has oodles of money to spend on other projects, like more Congressional and LGUs pork barrel.

Large private investments vs. large government bureaucracies. The winner is not hard to see.

On another note, a friend and fellow UP School of Economics (UPSE) alumni, Dr. Armando "Mandy" Armas, is coming up with a new book, below. I am waiting for news from him when and where will be the book launching.


From Mandy's previous postings in our UPSE alumni yahoogroups, he wrote something negative about the sector. So I am eager to see and read his book.
-----------