The ongoing debt crisis, more specifically governments (not private) debt crisis of many rich countries around the world, especially Europe and the US, simply will not go away. Not in the short-term, and definitely not in the long-term. Here are some graphics I got from The Economist Daily Chart.

From November 18th 2011 issue, "Europe's Deepening Crisis". Here are two charts. Above, Europe's richest economies in terms of GDP per capita. Those with smaller populations tend to rank high (they have a smaller denominator). Lower chart is a depressing picture for some countries, unemployment rate as high as 23 percent in Spain, and 16 to 18 percent for Latvia and Greece. 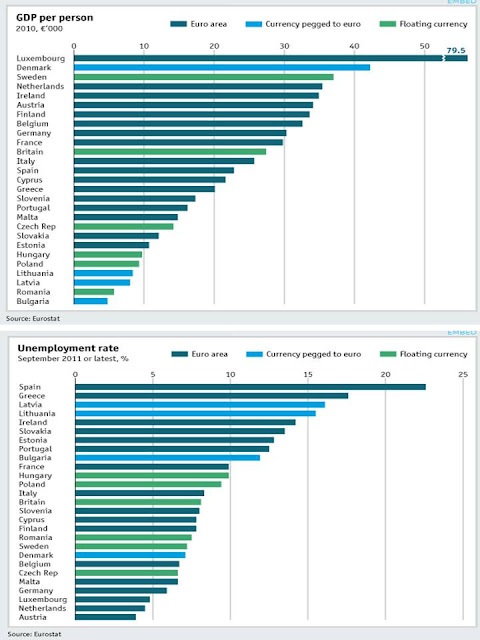 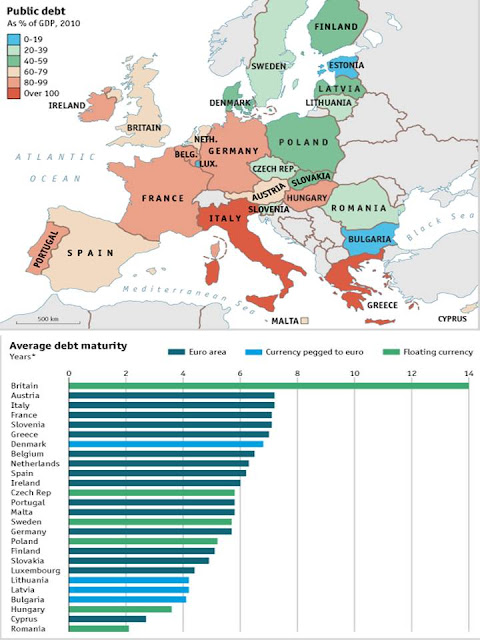 These charts are from Daily Charts, November 9th, 2011,  The maths behind the madness. It's an interactive chart, you pull the drop-down to see the country charts. For easier navigation, I compiled the screen shots of those countries and put them in one file, four countries in one rectangle.

Countries which have higher than EU average for gross government debt/GDP ratio here are Italy and Portugal. Spain, reeling also in fiscal crisis, has lower average ratio, but its problem is its very high unemployment rate -- fewer taxpayers and more welfare seekers. Switzerland definitely has a lower ratio than EU average. 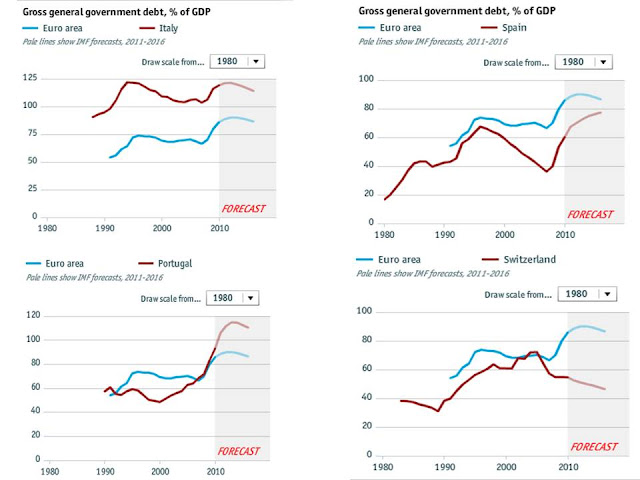 The US has recently surpassed the EU average. Japan, definitely, long before many European economies began reeling with heavy public indebtedness. The Japanese government though is heavily indebted to its citizens and corporations, so the bulk of government debt is denominated in Yen, not in $ or Euro or Pounds, etc.

In general, G7 world's industrial economies are heavily indebted -- led by Japan and the US. Whereas emerging economies like China, India, Brazil, Russia, Indonesia (also among the world's largest populations) have lower debt. 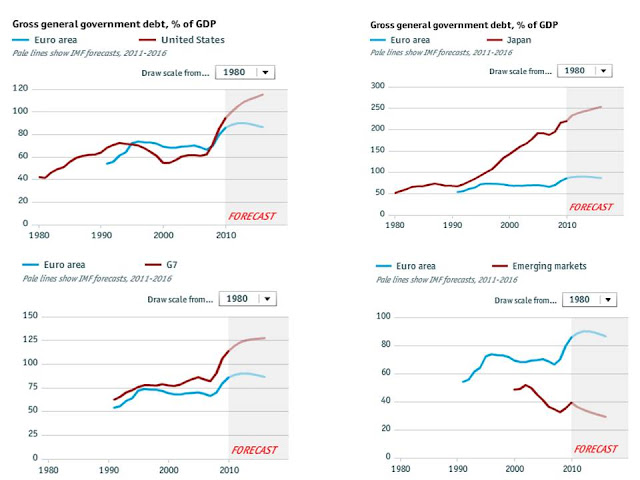 Living within one's means. This used to be a simple and common sensical concept. But because governments everywhere have been expanding to giant and monster bureaucracies, they have totally abandoned that concept. It has become "living and borrowing... endlessly".

It is true that government bail outs of some huge private corporations were partly responsible for the bloating of the public debt. And it speaks of business cronyism when governments become too big. But it is also private individuals and enterprises' savings that bail out governments -- through high and multiple taxes, lending to governments.

Governments and their millions of bureaucrats and politicians need to go back to that simple motto. "Live within your means", do not spend more than what you earn unless in cases of emergencies. Then work hard, be frugal, and let go, aka privatize, those assets that are non-essential in order to pay back those debts you incurred in times of emergency.
-----