Wonderful date today, 6 one's. Many groups and individuals marked this day for the launching of some of their big programs and projects.

Me, I will just attend the Philippine Economic Society (PES) annual meeting and conference, a whole day activity to be held at the Bangko Sentral ng Pilipinas (BSP). Will meet many friends there in the economics profession. I've been inactive of the PES lately. Well, I did not like the themes and topics of previous conferences before. This year, still another cheesy topic, but the good thing is that there are so many simultaneous panel discussions, something like 6 to 7 panels on-going at the same time, so I can just hop from one panel to another if one panel is boring. This is the main reason that attracted me to attend today's PES big event. 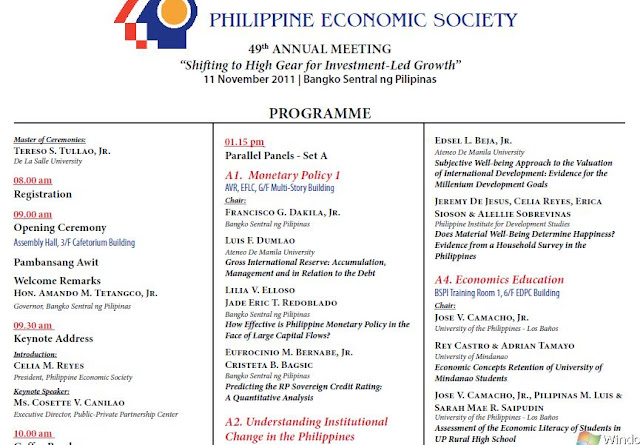 In the morning session, I plan to attend the discussion on "Understanding Institutional Change in the Philippines". I want to see if the speakers will mention topics like rule of law and property rights, two of the most important but often overlooked concepts in many economic and social literatures in the country. Or I can jump to the panel on International Trade.

In the afternoon, I plan to attend the panel on "Labor and Migration", or "Issues on Restraining Firm Market Power". Restrain market power? Why not restrain government power? There will also be cocktails after the conference, yeah, beer or wine, I prefer beer.

November 2011 is quite pivotal for some countries. The governments in Greece has sunk, Italy's is sinking, well at least for Berlusconi. Thailand is sinking too, literally for many of its provinces including a big portion of Bangkok. The floods are still rampaging, for weeks now. Some folks will definitely and idiotly argue that "warming causes cooling", yeah right.

State welfarism is very costly, many countries on both sides of the Atlantic are realizing it slowly. Paying someone for not working, or giving "free" healthcare for many if not all people, early retirement (like 50 years old in Greece?) and long pensions, are slam dunking their public finance with tons and tons of public debt. Public Debt/GDP ratio of 50 percent seems mild these days, as many countries are on the 60 to 100 percent or higher ratio already.

And talks of Israeli strike of Iran's nuke facilities has resurfaced. Here in the Philippines, talks of "all out war" against the communist CPP-NPA and the secessionist MILF rebels is also resurfacing, at least among a few sectors who want to end these 42 to 43 years old armed conflict. Me too, I'm tired of all these war, even if they are limited to far away municipalities and barrios. I don't want to see -- and finance through endless taxes and fees -- all those wars and bloated military bureaucracies for the next decades. It's an endless war it seems, benefitting both rebels and various bureaucracies and politicians in government.

Have to pack up now. Drive my wife to her office, then my daughter to her kinder school, then go to the PES conference. Long day but hopefully intellectually enriching one.
------

The PES conference was great, lots of good papers presented, big audience too, should be 200+ participants. I actually came late, past 10am. The morning plenary session has already started, about Public Private Partnership (PPP) on various infrastructure projects. There were four speakers, one from the PPP Office, one from the Department of Finance, and two from the Asian Development Bank (ADB). I forgot the conference kit at home, I don't remember their names, but will write about it further. Peter Wallace was the moderator.

The two ADB guys talked a lot about public goods, like hard infrastructures (roads, energy, ports, etc.) and education. During the open forum, I was one of those who asked questions. I said something like this.


My question and comments are addressed to the two speakers from the ADB. You talked a lot about public goods, state responsibility, but I think one important public good now that government can provide is how to reduce the public debt, reduce the interest payment burden. The ongoing debt problems in Greece, Italy, the US and other developed countries clearly show that high public debt leading to economic turmoil is one clear proof of government failure, of government as creator or instigator of economic instability. So why not push for private sector investments even with no public sector participation? When government comes in, they bring lots of bureaucracies, as earlier mentioned by Mr. Vic Valdepenas where the PPP Office is duplicating the functions of the ICC (Investment Coordinating Council), the BOI (Board of Investments) and other agencies. Government also contract more debt, and get more taxes to finance those debts. So it is possible to have more private sector investments with no additional public debt.

Interest payment alone of the Philippine government is around P330 billion per year, average for 2010 to 2012, principal amortization not included yet, clearly a huge public finance burden. If private investors come in, government can only ask them, "Will you be involved in drug pushing, human trafficking, related activities?" If their answer is No, then government should tell them, "Ok, start your business tomorrow" and that's how we proceed with investment-led growth.

Perhaps it was somehow a shocker for the two ADB guys to be told that government -- and ADB-pushed new debts -- should step back. My gift for them on 11-11-11. In fairness to the two guys, they admitted that bigger private sector involvement is possible and desirable, that high public debt is a big issue for many economies.

More stories later in this blog.
Posted by Bienvenido Oplas Jr at 6:39 AM